Report and highlights from the Sky Bet Championship clash between Reading and Middlesbrough at the Select Car Leasing Stadium as Alen Halilovic's second-half goal sealed victory for the Royals on Saturday afternoon. Highlights of the Sky Bet Championship match between Reading and Middlesbrough.

Reading put a difficult week behind them with a battling 1-0 victory over Middlesbrough in the Sky Bet Championship.

With a potential points deduction looming on the horizon, Veljko Paunovic's side responded thanks to a second-half strike from Alen Halilovic at the Select Car Leasing Stadium.

It is three wins from three for the Royals, and also a first clean sheet of the campaign. For Middlesbrough, it was another disappointing performance in what has been a poor start to the season. They remain on just nine points from as many games, and ended the game with 10 men after a late red card for Matt Crooks.

It looked as though Middlesbrough had got off to the best possible start as Crooks headed in after just two minutes, but the flag was up on the far side swiftly as Isaiah Jones had taken the ball out of play before crossing for his team-mate.

Reading had one great chance after 22 minutes themselves, as they found the in-form John Swift free in the box, but he could only shoot straight at Joe Lumley when he should have done far better.

They went even closer two minutes after the break after a fine move led to Danny Drinkwater threading Tom Dele-Bashiru in behind, but Lumley raced off his line to deny him with a good stop.

After 55 minutes they did find what turned out to be the winner, however. It was another great sweeping move from the Royals, and it was no surprise that Swift was the man at the heart of it, as he charged into the box and pulled the ball back for Halilovic, who bundled the ball inside the near post somewhat fortunately as he struck the ball off his own left leg to wrongfoot Lumley.

And a bad afternoon got worse for Boro in the 87th minute as Crooks saw red for what referee Peter Bankes deemed to be a dangerous challenge on goalkeeper Luke Southwood.

Reading's Veljko Paunovic: "I don't want distractions. We are only focused on the things that we can control and that is our performance. I don't want to talk about this. It is out of my control. I don't control it.

"Considering our circumstances with all the injuries, we always looked to put out a team that could compete and win. There's always an idea behind what we're trying to do and we were more than satisfied with the players showing such great spirit. We keep rolling, we keep going, but with our feet on the ground. But the confidence is now restored and the belief is also there." 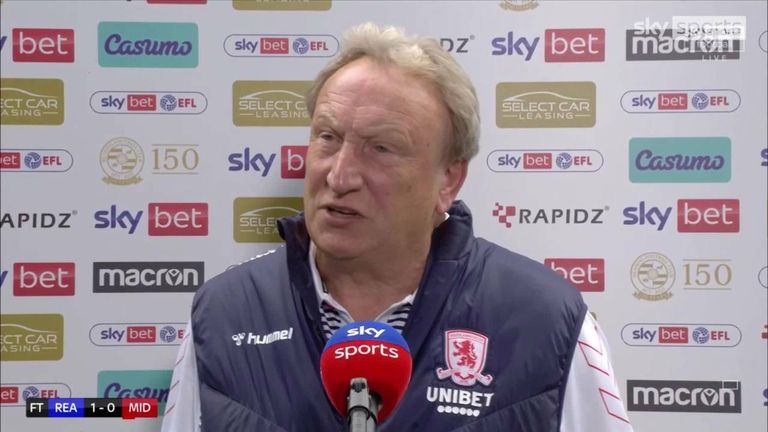 Neil Warnock says referee Peter Bankes is a good referee but does not agree with his decision to send off Matt Crooks in their 1-0 defeat at Reading.

Middlesbrough's Neil Warnock: "The referee [Peter Bankes] was in a terrible position. He said that he saw the tackle and then had advice from his linesman who was 45 yards away. A young linesman who looked about 18. The linesman said he saw Crooks go in for the ball with his studs high and endangering him [Southwood] so he immediately said red card to the referee.

"Peter didn't have a very good second half and he was in a terrible position and he's listened to a young pup with a flag in his hand. It's terrible really. I've been in the game 42 years and this group of Championship referees at the minute is probably the worst I have ever come across. Honestly, if Matt hadn't have gone in for that challenge, I'd have probably fined him."

Man of the Match: John Swift Man of the match John Swift says hard work was the key to Reading’s win over Middlesbrough.

Where would Reading be without John Swift this season? By full-time of this game no man in the Championship had more goals, and he also had more assists than anyone else. He provided another brilliant one at the Select Car Leasing Stadium, with his work proving pivotal in the winner scored by Halilovic. He's probably the standout midfielder in the second tier right now.