Rennes vs Arsenal. UEFA Europa League Round of 16.

Rennes capitalised on Sokratis Papastathopoulos' first-half dismissal to take control of their Europa League last-16 tie with a 3-1 first-leg victory over Arsenal at Roazhon Park.

Alex Iwobi's third-minute strike laid the foundations for a positive start from the Gunners, but that was undone on 41 minutes when Sokratis was sent off for a second bookable offence.

A Nacho Monreal own goal on 64 minutes was compounded two minutes from time when Ismaila Sarr powered home a header to leave Unai Emery's side with a mountain to climb in next week's return leg at the Emirates.

Man of the Match: Benjamin Bourigeaud.

Applications for tickets could have sold out Roazhon Park three times over and the home support made a cauldron of noise which only intensified as the game got underway.

But Arsenal silenced to crowd with an away goal inside three minutes as Iwobi's low cross from the left caught goalkeeper Tomas Koubek out and nestled in the far corner.

Iwobi then almost turned provider, again breaking down the left before squaring across the box for Lucas Torreira to sting the palms of Koubek with a driven effort.

Sokratis was booked for bringing down Ben Arfa as he looked to break on the Arsenal goal, the winger's resulting free-kick saved low to his right by Petr Cech. 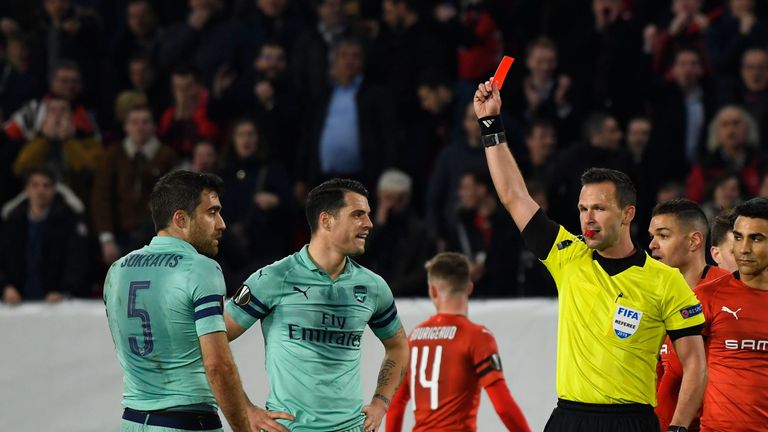 It was not too long before the Greece international was given his marching orders, shown a second yellow card in a matter of seven minutes for hauling back Sarr as he raced through on goal.

And Arsenal were made to pay immediately, Ben Arfa's free-kick hitting the wall only for Bourigeaud to thrash home the rebound from 20 yards and draw the hosts level.

Rennes, spearheaded in attack by Bourigeaud, shifted the ball around well to create space against Arsenal's 10 men, and a number of defensive errors culminated in Monreal miscuing a clearance and turning Zeffane's cross past Cech for an own goal.

The manner of the defeat and the congested fixture list only highlights the problems that Unai Emery is having to deal with this season, writes Adam Bate.

Emery appeared to accept a narrow loss rather than risk further damage by chasing an equaliser, replacing lone forward Pierre-Emerick Aubameyang in the closing stages.

But his side will have to reach the quarter-finals the hard way after Sarr's diving header after 88 minutes compounded a poor night for the visitors.