The Republic of Ireland's final home match of 2022 ends in a 2-1 friendly defeat to Norway; Ohi Omoijuanfo hits late goal for visitors who were without Erling Haaland; Bruno Fernandes scores twice in Portugal's World Cup warm-up win over Nigeria; Spain defeat Jordan ahead of tournament 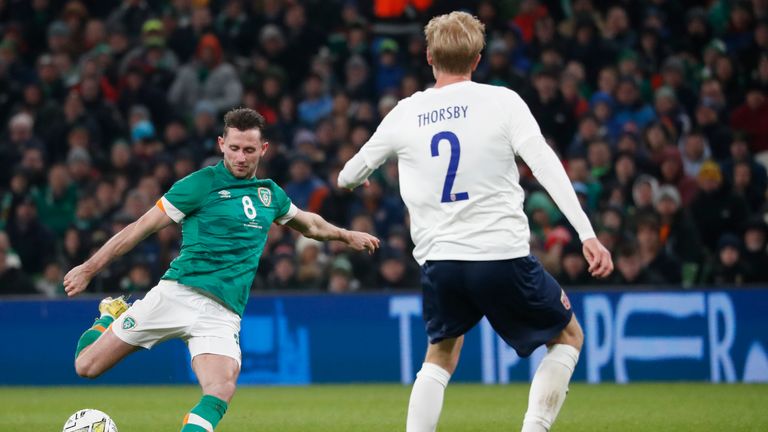 Substitute Ohi Omoijuanfo made light of Erling Haaland's absence as Norway struck late to beat the Republic of Ireland 2-1 in Dublin.

Omoijuanfo snatched the visitors victory with his first senior international goal at the Aviva Stadium after Alan Browne had cancelled out Leo Ostigard's opener.

It was a kick in the teeth for Stephen Kenny's men, who had rallied after a pedestrian first half to look the team more likely to win the game after the break.

They will head for Malta on Sunday knowing there are issues to address before they open their Euro 2024 campaign in March with a daunting fixture against France.

The home side enjoyed a let-off when Mohamed Elyounoussi slipped before he could shoot after carving his way into the penalty area 12 minutes before the break, but they were not so fortunate with five minutes of the half remaining.

Ostigard timed his run to perfection to get in front of John Egan and head Martin Odegaard's corner past Gavin Bazunu to give Norway a deserved lead.

Callum O'Dowda failed to make the most of a headed opportunity at the far post, but it was from his 69th-minute cross that his side forced their way back into it.

Ostigard could only head the ball to Browne on the edge of the box and he sent a skidding shot inside the post despite Orjan Nyland's best efforts.

However, there was to be a late twist when, after Nathan Collins failed to deal with an 85th-minute Odegaard free-kick, substitute Omoijuanfo stabbed home to win it. 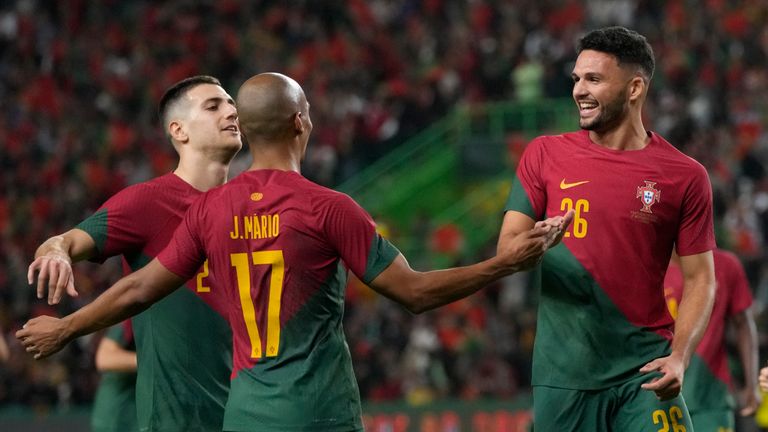 Highlights of the international friendly between Portugal and Nigeria.

Bruno Fernandes scored twice in the first half and debutant Goncalo Ramos and Joao Mario added late goals as Portugal crushed Nigeria 4-0 in a World Cup warm-up in Lisbon on Thursday.

Missing Cristiano Ronaldo due to a stomach bug, his Manchester United team-mate Fernandes led a strong Portugal side in their last match before travelling to Doha on Friday.

The only surprise was the debut of 19-year-old Benfica defender Antonio Silva, who started ahead of Pepe as the veteran works his way back from a long injury lay-off.

Portugal are in World Cup Group H with Ghana, Uruguay and South Korea.

Ansu Fati seized his chance to impress Spain manager Luis Enrique as the Barcelona youngster scored in his side's 3-1 victory over Jordan in a World Cup warm-up game.

The 20-year-old started and needed only 13 minutes to make his mark in a sold-out Amman International Stadium.

With all eyes on Fati after doubts over whether he would make the 26-man squad, he looked lively and was off-target with another couple of attempts as a Spanish side featuring several fringe players dominated.

The 2010 world champions doubled their lead in the 56th minute when Gavi fired home.

Athletic Bilbao youngster Nico Williams, who replaced Fati late on, did his cause no harm with a well-taken third in the 84th minute for his first Spain goal.

Spain play Costa Rica in their World Cup opener on Wednesday and they also face Germany and Japan in Group E.