Report and highlights as Salford's play-off hopes were ended as the spoils were shared in an entertaining 2-2 draw with promotion-chasing Mansfield; Salford resigned to another campaign in League Two while Mansfield missed a chance to climb into the top three with one game to go 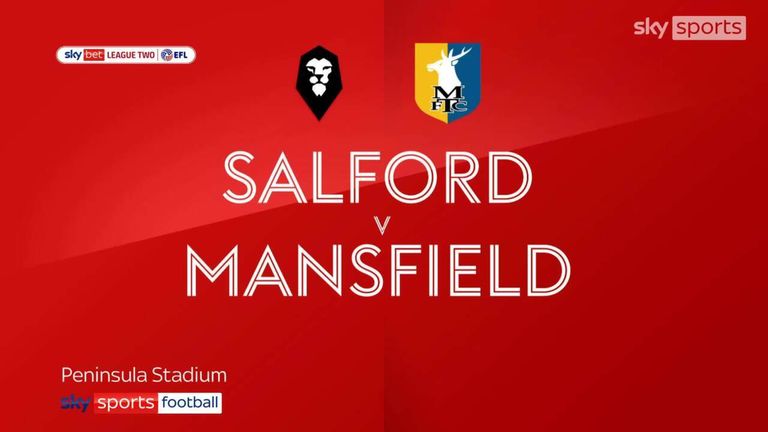 Salford's play-off hopes were ended as the spoils were shared in an entertaining 2-2 draw with promotion-chasing Mansfield.

The Ammies secured a dream start inside 90 seconds when Jordan Turnbull met an enticing Ibou Touray delivery with an emphatic header.

Nigel Clough's men responded positively and were soon rewarded when a curling Stephen McLaughlin free-kick nestled in the corner.

Buoyed by a 1,286-strong travelling support, the Stags looked to complete a quick turnaround, with Rhys Oates threatening.

And their persistence paid off when Turnbull handled in the area and McLaughlin notched his second of the afternoon from the penalty spot.

Despite the setback, the hosts returned from the interval in the ascendancy and found an equaliser through Matty Lund's precise header.

Lund then struck the woodwork from close range, yet neither side could find a winner as the Ammies were resigned to another campaign in Sky Bet League Two while Mansfield missed a chance to climb into the top three with one game to go.

Salford boss Gary Bowyer: "The lads are absolutely gutted because they gave everything this season like they have done today.

"They're a great set of lads to work with and we've got to come back stronger now. You look at the way that we are on the pitch and we're going the right way, but we need to get better.

"We started the game ever so well, but I'm disappointed with the manner of the two goals that we concede. It became a bit of a basketball game where we had to go for it, but it was that little bit of craft and guile in the final third which we missed.

"I didn't think it was refereed particularly well, especially with the manner of the two decisions that led to their two goals. It wasn't a difficult game to referee, but he wanted to blow his whistle quite a bit. But the way we went about it, we were terrific."

Mansfield boss Nigel Clough: "Both teams had to go for it, but I'm unbelievably disappointed with the goals we've conceded today. Two headers from the middle of our goal, unchallenged, and that's what's cost us the game.

"We've had enough chances to win 3-2 or 4-2, especially at the end. They'd got to win and had to go for it, so they were leaving spaces, but our front four didn't exploit it. We just needed somebody to produce a little bit of quality today to win the game.

"We got into some great positions and (Nathan) Bishop didn't have too much to do. I'm just disappointed after that really good 20 minutes that we played that we didn't really get back onto it.

"It feels like an opportunity missed today because the goals that we conceded were really poor."