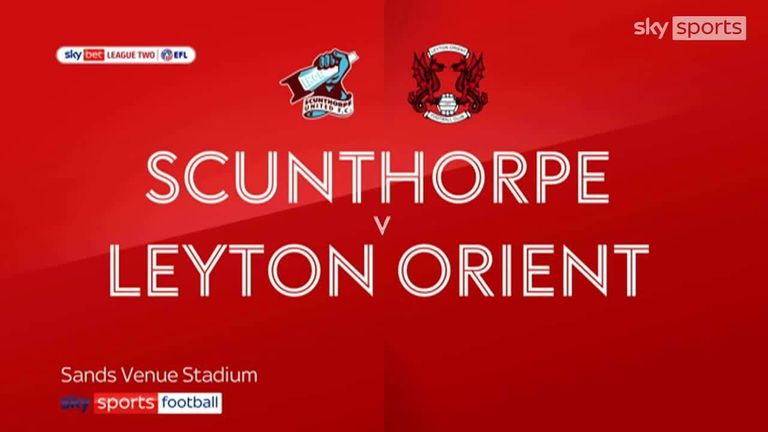 Highlights of the Sky Bet League Two match between Scunthorpe and Leyton Orient.

Substitute Jake Scrimshaw rescued a point for bottom-of-the-table Scunthorpe as they came from behind to draw 1-1 at home to Leyton Orient.

The on-loan Bournemouth striker forced the ball home four minutes after coming off the bench to cancel out Aaron Drinan's first-half opener.

Play-off hopefuls Orient will view the game as two points dropped, with the wasteful visitors unable to take any of a host of second-half chances.

The O's dominated throughout and Drinan swept them in front in the 21st minute when he finished off a flowing move upfield.

They went close to doubling their lead nine minutes after the restart when Dan Kemp fired across the face of goal, and Drinan should have done better when he scuffed his shot with only the goalkeeper to beat.

Both misses proved costly as Scrimshaw hooked home at the second attempt when Orient failed to clear a corner in the 64th minute.

Still there were chances for the visitors to take all three points, but Harry Smith fired against the inside of the woodwork and not long after lost his footing when trying to meet a ball at the back post.

Substitute Paul Smyth wasted the best opportunity of the night in the final 10 minutes when he raced clear only to lift his shot wide, allowing Scunthorpe to breath a sigh of relief.