Report and highlights as Aleksandar Mitrovic scores twice from the bench to take the game away from Ireland; Alan Browne had ended a 678-minute goal drought by opening scoring; Ireland have it all to do already in Group A Republic of Ireland remain winless under Stephen Kenny as their World Cup qualification campaign got off to a poor start with a 3-2 defeat in Serbia.

Things were looking rosy for Kenny and his injury-hit side on his ninth game in charge when Alan Browne headed them in front, ending an Irish goal drought that had reached 678 minutes. However, Dusan Vlahovic levelled it up just before the break before the game was settled by two goals from Aleksandar Mitrovic, who sprung from the bench to devastating effect.

His first was a sensational chip from 35 yards that caught out rookie goalkeeper Mark Travers before scoring with a more traditional Mitrovic-like headed goal.

James Collins netted a late goal to give Ireland hope but it only proved to be a consolation.

This defeat represents a damaging early blow for Ireland's hopes of reaching the World Cup in Qatar, they'll need to either win this group that contains Portugal to qualify automatically or finish as group runners-up to enter the playoffs where just three teams can grab a final qualification place.

Man of the match: Alexander Mitrovic

Like Ireland, Serbia failed to reach Euro 2020 after losing on penalties to Scotland and decided to go in a new direction under Dragan Stojkovic, who called for his team to play "beautiful football" ahead of this game.

Nemanja Matic and Luka Milivojevic both retired from international football and Mitrovic and Luka Jovic were only on the bench in an unfamiliar looking team from a Premier League perspective. Dusan Tadic - formerly of Southampton - was Serbia's brightest spark but struggled with his final ball as the Irish backline stood firm with Seamus Coleman giving fine protection to Travers.

That solid platform gave the attacking players a bit of licence to play with and Browne headed the visitors ahead on 18 minutes. Enda Stevens and Callum Robinson linked well down the left and a cross found Browne charging in at the back post. He powered above his marker to find the bottom corner with a superb header, netting Ireland's first goal in their last six competitive fixtures.

Vlahovic glanced a 37th-minute header harmlessly across goal after getting ahead of Dara O'Shea to meet Filip Mladenovic's cross, but he made no mistake three minutes later when he ran on to Tadic's flick-on and fired left-footed past the helpless Travers.

The Republic 'keeper then had to make a smart save from Tadic, who curled the resulting corner into the side-netting.

Robinson was almost the provider once again within five minutes of the restart when, against the run of play, he caught the Serbs cold to send in a cross from the right, but defender Stefan Mitrovic got there just ahead of Aaron Connolly.

The visitors enjoyed a far greater share of the ball as the second half unfolded and Ciaran Clark glanced a header wide from a 57th-minute Browne corner after Matt Doherty had stretched the home defence.

But Vlahovic only just failed to get a touch on defender Nikola Milenkovic's raking 63rd-minute strike as it sped inches wide of the far post at the other end, prompting striker Mitrovic's introduction.

The newcomer needed only five minutes to leave his mark on the game, spotting Travers off his line before chipping him deliciously from an unlikely angle to put Serbia ahead for the first time, and promptly helped himself to a second within seven minutes with a trademark header from Tadic's cross.

Substitute Collins pulled one back for the visitors with four minutes to go after capitalising on Stefan Mitrovic's weak header, but there was no way back.

Man of the match: Aleksandar Mitrovic

This was a timely reminder of the Fulham striker's finishing ability.

His last act before this in a competitive match for Serbia was one that Scotland fans will never forget - when his penalty in the European Championship playoff was saved by David Marshall. He was on a retrieval mission here when thrown on with 30 minutes remaining and put in a masterclass of centre-forward play, scoring twice and holding the ball with real quality.

He has now scored 38 goals for Serbia, more than any other player since the country started competing as an independent nation. 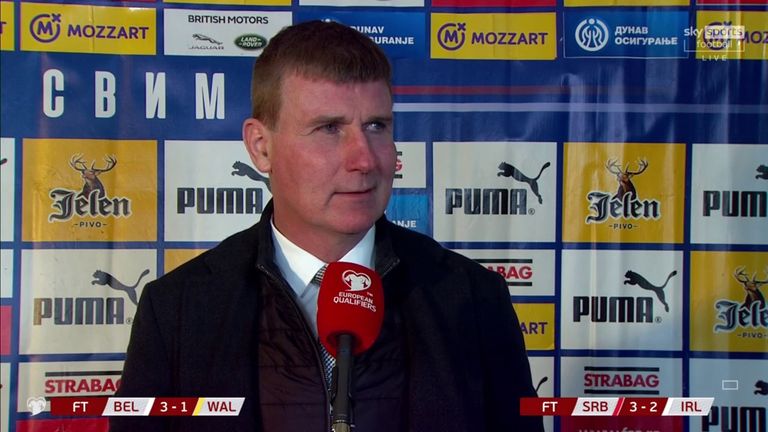 Republic of Ireland manager Stephen Kenny claimed Serbia's ruthlessness in front of goal proved to be the difference in their 3-2 World Cup Qualifier defeat.

Stephen Kenny told Sky Sports: "You don't get anything for that [a good performance], unfortunately.

"The players were terrific. Normally when you concede three goals, it's normally as a result of conceding six or seven or eight chances.

"They've scored with their first chance - they've been ruthless with their finishing, really, on the night, so we're really disappointed to lose that game."

Next up for Kenny's side is a home clash with Luxembourg on Saturday before a friendly encounter with World Cup hosts Qatar on Tuesday.