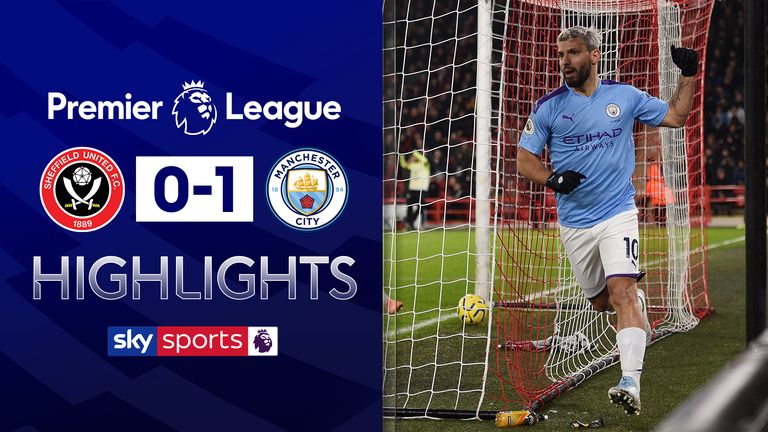 FREE TO WATCH: Highlights from Manchester City's win over Sheffield United in the Premier League

Six minutes after replacing his regular strike partner, Aguero tucked in from close range from Kevin De Bruyne's teasing low cross into the six-yard box, as Man City finally made their mounting chances count to break the deadlock 17 minutes from time.

They should have led well before that but Dean Henderson's fine form kept them at bay. First he kept out Raheem Sterling's goalbound effort with a wonderful flying save, but his best stop denied Jesus from the penalty spot with another full-length dive after Chris Basham had fouled Riyad Mahrez.

After the break, Sheffield United improved and went close through substitute Lys Mousset and also Oli McBurnie, but Aguero's finish earned a deserved victory for Man City, who move six points clear of third-placed Leicester, who have a game in hand.

Manchester City finally welcomed back Aymeric Laporte for his first game in more than four months in a surprising addition to their recently porous backline.

His influence was felt from the off, as Sheffield United often found themselves in dangerous positions but could not find their way through a newly robust City defence. Early on, Billy Sharp robbed Oleksandr Zinchenko of the ball just outside the box, but his through ball for John Fleck was well read by Nicolas Otamendi.

At the other end, Henderson had to be at his best to keep out Sterling's stabbed effort towards the near post with some rapid reactions, and again to deny an acrobatic scissor kick from Otamendi.

He looked likely to be beaten when Mahrez danced his way through two challenges in the Blades box before Basham's clumsy challenge sent him to the ground, but Jesus' spot-kick, at a comfortable height, was kept out - meaning the Brazil international has now missed three of his five Premier League penalties.

Sheffield United had not managed a shot on target before the break, but after it they improved thanks in part to the addition of Mousset on the hour mark.

Within minutes, he could have broken the deadlock when Ederson pushed Basham's low cross into his path, but in trying to adjust himself for a backheel he allowed the goalkeeper time to get to his feet and hold his effort when it came.

McBurnie went close too but could only divert an Enda Stevens cross wide of the far post with a sliding effort, moments before substitute Aguero finally broke the deadlock.

Sheffield United changed two from the draw at Arsenal, bringing in Mo Besic, for his first league start, and Billy Sharp.

De Bruyne was unusually afforded a free run down the City right and from just inside the box curled the ball around the home backline to meet Aguero's run at the far post, and the Argentine striker could not miss scoring a sixth goal in three games.

Rodri could have wrapped up victory but glanced a header onto the roof of the net from a corner while Sheffield United struggled to threaten an equaliser, as an unusually assured City defence ground out a deserved clean sheet to consolidate second place.

Man of the match - Dean Henderson

Henderson has put in some marvellous performances for Sheffield United this season, and this was certainly among the best. His stop to keep out Sterling's early effort was tremendous but his penalty save - albeit from at least a couple of yards off his line - was the best of the night.

He had little chance with Aguero's goal late on but his confidence between the sticks made it a closer game than it otherwise could, and perhaps should, have been.

Both these sides turn their attentions to the FA Cup fourth round now, with Sheffield United travelling to Millwall on Saturday at 3pm. Man City host Fulham at 1pm on Sunday.