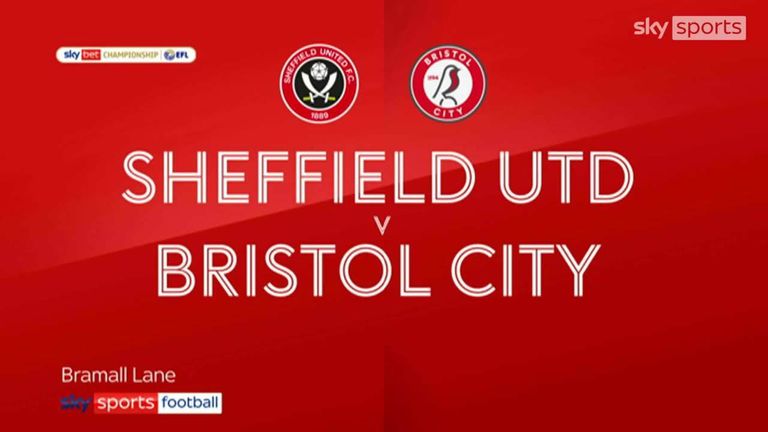 Goals from Rhian Brewster and Billy Sharp gave Paul Heckingbottom a winning start as Sheffield United manager as the Blades beat Bristol City 2-0 on a snowy afternoon at Bramall Lane.

Heckingbottom, who had a spell as caretaker manager last season following Chris Wilder's departure, was introduced to the crowd before kick-off after replacing Slavisa Jokanovic.

Other members of the new-look management team - Stuart McCall and Jack Lester - also took their places on the bench.

The hosts got off to a lively start with Morgan Gibbs-White sending over a low cross early on which just evaded Brewster.

Jayden Bogle then went close, putting a far-post header wide after getting on the end of a cross from Enda Stevens.

City's first chance fell to Chris Martin who met Alex Scott's corner with a firm header, but 'keeper Wes Foderingham was equal to it, making a good save to his right.

Brewster struck five minutes before the break, producing a neat turn and firing low past Daniel Bentley after receiving the ball from Stevens.

There was a break in play lasting around 10 minutes in the early stages of the second half when Nathan Baker received lengthy treatment following a clash of heads. The player was eventually carried off on a stretcher with Robert Atkinson taking his place.

The home side also made an attacking change with Sharp sent on in place of Brewster.

A rare effort on goal from City saw Tyreeq Bakinson try a long-range shot which was saved by Foderingham, who gathered the ball at the second attempt.

Gibbs-White had a shot beaten away by Bentley at his near post after playing a one-two with Oliver Norwood.

Norwood then tried an effort from distance which looked to be drifting off target, but Bentley made sure by turning the ball wide.

United continued to apply pressure with John Egan heading wide and Sharp's downward shot bouncing up off the turf, forcing Bentley to tip the ball over.

Egan also headed wide before Sharp (89) sealed the victory, applying the finish from close range after David McGoldrick delivered a low cross from the right.

In the 13 minutes of time added on, there were efforts at either end with Gibbs-White and Wells both putting shots wide.

Sheffield United's Paul Heckingbottom: "I was pleased with lots of things in the game. I thought the approach was good and the players responding to the messages was very good. I think it was important we got that goal before half-time. We were easily good value for one-nil - it should have been more.

"The second half was very similar - 21 shots and it's still one-nil and you're wondering if they're going to get a chance at the other end. When that second goal went in, it was an important moment in the game. We knew Bristol's threats to be on the counter with a long ball. In open play, we were defensively strong. Bristol came to slow the game down and the players' intensity, I thought, was good. We managed to try and keep the game played at our tempo when the ball was on the pitch. That was an important thing for us."

Bristol City's Nigel Pearson: "We needed to be at our best and I thought we were a bit careless in possession and we weren't as aggressive as we needed to be against them. There were too many unforced errors and bad decision making. Today was a day when there are a few lessons to be learned.

"We made some bad decisions when we had some good possession. We needed too many touches which is a lesson for some of our younger players. At one-nil, the second goal comes from a bad decision from one of our senior players. It looked as though they were slightly relieved to get the second goal which, in the context of the game, was a bit surprising in itself."