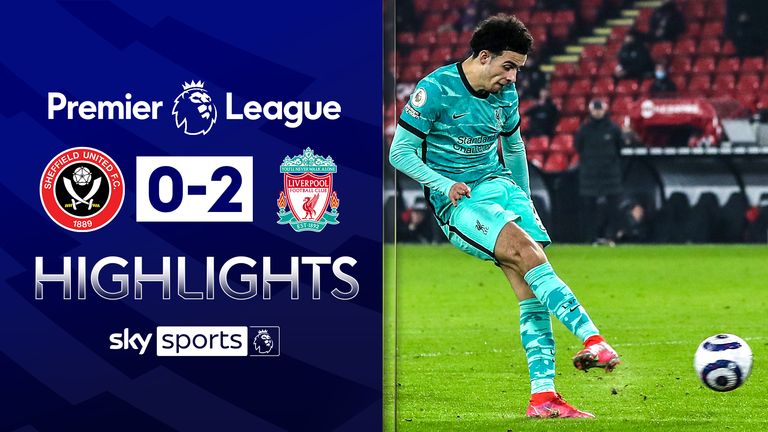 FREE TO WATCH: Highlights from Liverpool's win at Sheffield United in the Premier League

Liverpool ended a run of four successive Premier League losses with a 2-0 win at bottom club Sheffield United, boosting their hopes of finishing in the top four.

Four of the five teams above Liverpool had failed to win this weekend, handing Jurgen Klopp's side a perfect opportunity to make up ground against the Premier League's basement club.

It looked like it could be a frustrating evening for Liverpool as Aaron Ramsdale made a string of superb saves in the first half. Ozan Kabak - paired with Nat Phillips for Liverpool's 14th different centre-back partnership in the league this season - had the ball in his own net, but Oli McBurnie was penalised for offside in the build-up.

But it took under three minutes for Liverpool to take the lead after the break as Curtis Jones powered his shot home, although it was subject to a VAR check to see if the ball had gone out of play beforehand. Roberto Firmino's shot was then deflected home by Kean Bryan (64), with the Blades defender eventually credited with the own goal.

Liverpool are now two points behind West Ham in fourth, keeping their hopes of finishing in the Champions League places alive. They are also a point behind Chelsea in fifth, who they face in the Premier League on Thursday, live on Sky Sports.

Sheffield United remain rooted to the bottom of the table after their fourth league defeat in a row and are now 15 points from safety.

How Liverpool returned to winning ways

Adrian had conceded nine goals in his two Premier League appearances heading into Sunday's game, but made a vital save early on. David McGoldrick nodded his way from an Oliver Norwood free-kick, but his effort went straight at the goalkeeper. It was a similar story soon after as McGoldrick's effort took a deflection off McBurnie - who had done well in the build-up - but the Liverpool stopper was down low to push it behind for a corner.

But the real star of the first half was Ramsdale. The signs were there early on as Firmino drove into the area, but the Sheffield United stopper made a good, low save with his feet. He got up quickly though as Liverpool recycled the ball, flicking an Andy Robertson cross away with his fingertips.

Man of the match: Curtis Jones.

Ramsdale made two further saves around the half-hour mark. Mohamed Salah, marked well by Phil Jagielka, drove into the area, but his low effort was seen away by Ramsdale's foot. Trent Alexander-Arnold then tried to get the better of the Blades goalkeeper, but he made a leaping save to keep out the Liverpool right-back. Soon after, Georginio Wijnaldum sent a fierce drive his way, but Ramsdale made another wonderful save, before Ethan Ampadu cleared Firmino's attempted cut-back.

A Liverpool player did have the ball in the net in the 36th minute, but it was at the wrong end of the pitch. Enda Stevens floated a lovely ball forward for McBurnie, with his effort pinging off the feet of Kabak and past Adrian. However, the offside flag was correctly raised, much to the relief of the Liverpool defender.

It took just three minutes for Liverpool to take the lead after half-time. Alexander-Arnold drove down the right before cutting the ball back into the area. Jagielka inadvertently flicked the ball back for the waiting Jones, who hammered the ball past Ramsdale. VAR looked at whether the ball had gone out of play as Alexander-Arnold sent in his cross, but the goal was allowed to stand.

Liverpool had two more chances immediately after scoring - Jones nodding straight at Ramsdale before Mane's goal was ruled out for offside - but McBurnie had the best opportunity. Norwood sent a cross in from the top right corner, with the striker in the perfect position to score, but sent his header agonisingly wide.

Just as Sheffield United were beginning to find a foothold in the game, they scored a heartbreaking own goal. There was some lovely build-up between Firmino, Jones and Mane, with the Brazilian driving through the Blades' defence before striking. However, his effort pinged off the leg of Bryan, wrongfooting Ramsdale and doubling Liverpool's lead.

Liverpool should have added a third late on. Robertson fired the ball in, but Salah could only toe-poke the ball wide with the goal at his mercy. Despite a pre-match focus on Liverpool's defence, they registered a first Premier League clean sheet in over a month.

Man of the match - Curtis Jones 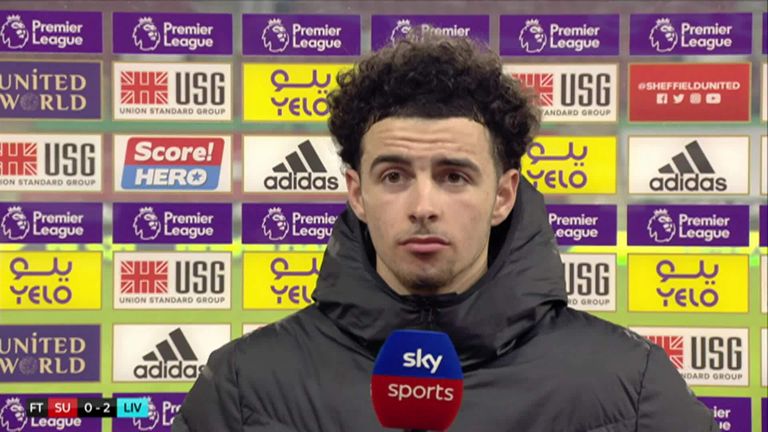 Although Liverpool's injury crisis may have hampered their season, it has allowed for the emergence of Jones and he produced a wonderful performance on Sunday. He led the way for shots (four) with three of those on target, taking his own goal well before helping to set up the second.

Sky Sports co-commentator Andy Hinchcliffe said: "Jones has had a really good performance here. His goal is a personal accolade but he really sent Liverpool on their way to that morale-boosting win. In a season where they've lost so many players, he has been a bright spark. He has come into the team, looked really comfortable and excelled." 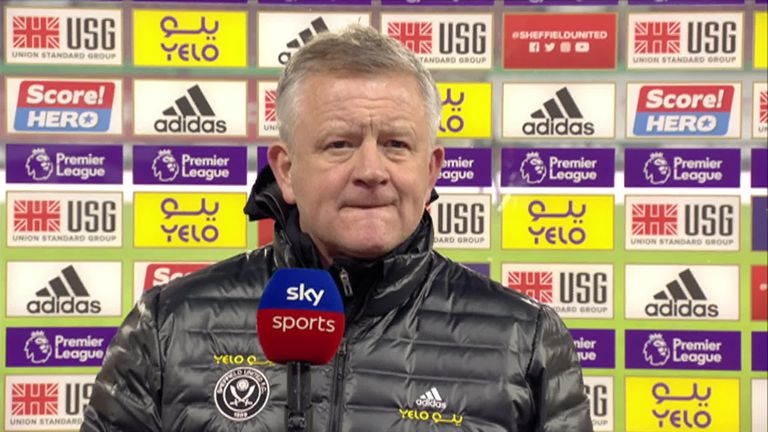 Speaking after the loss to Liverpool, Sheffield United's Chris Wilder says their recruitment model is based on signing the best Championship players which means there's a gulf in class when they play the bigger sides in the league

Sheffield United manager Chris Wilder said: "You've got to be at your best to beat Liverpool and take no notice of their last two or three games, they're still one of the top sides in England and Europe. So you have to be at your best and have your best players available and be on the top of your form and unfortunately, at the moment, we're not.

"Aaron [Ramsdale] has kept us in the game in the first half, but I would expect for any team like us in the bottom half [of the table] to get a result against Liverpool, your goalkeeper has got to play well, which he did in the first half.

"There were little half chances but it's another goal that goes with a catalogue of incredibly poor goals. Our defending this year, continuity plays a key but certainly individual mistakes, there's a mis-timed tackle that led to the first goal and we've got enough bodies around the ball for the second goal to cut that out. Obviously, it's a deflection and you're 2-0 down against some really top players and it turns into a last 20/25 minutes. 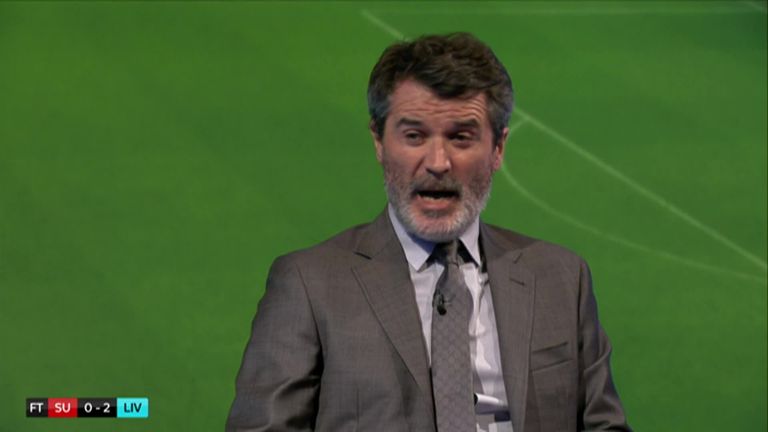 "I've looked at their faces in the changing room and they've given absolutely everything. I think it's quite easy for people to question, which they wouldn't if they knew the players. If they knew what I'm seeing, this is a really tough gig for them and all of us at the moment because of the season that we've had.

"The players mirror the spirit of the supporters, they mirror the club, I believe they mirror how I want my team to play. I don't think anybody can question their attitude or commitment, they give it everything and sometimes, you're just not good enough and you haven't got that quality to really compete. For long periods of this season, we haven't shown our qualities." 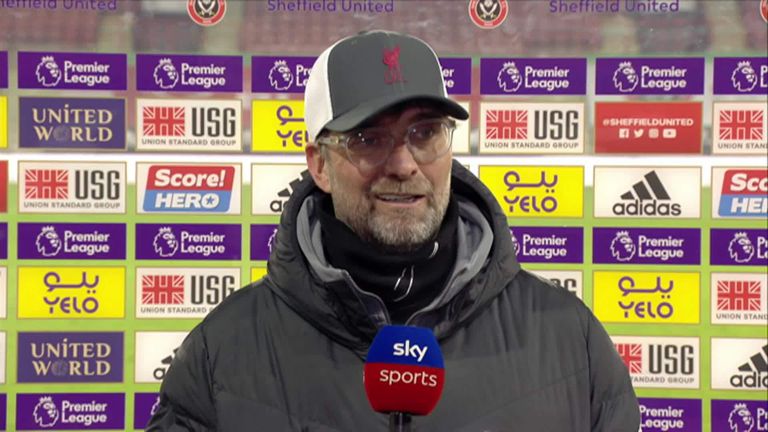 Liverpool manager Jurgen Klopp said: "I'm not sure if you ever play well enough to be honest, especially when you don't score.

"You can imagine our situation, it's not as if we're in the dressing room thinking 'all good, we will score', but the plan was to keep going and do the same stuff because in the moments when we played exactly how we wanted to play, they couldn't deal with us and we arrived pretty much in front of the goalie, but Aaron Ramsdale played an incredible game and had a few outstanding saves, Adrian as well.

"You know that Sheffield United have lost a lot of games, but all with the smallest margin you can get and it's clear that these games stay exciting until the end.

"In the first half, we should have scored three times and then the two goals and I think Robbo [Robertson] could have had a hat-trick tonight, so it just shows how what we created was really good and the finishing was, in the end, good enough for tonight but we know we need to improve.

"It was very important [the result] because plenty of people have written us off and that's completely fine. It's about us to show we are still there and tonight, we showed that. On Thursday, we play Chelsea and we have to show it again.

"I have never thought about controlling the situation or whatever, you just have to win football games, we know that and the rest is controlled by itself and it's always like this. There's no way without results into the Champions League and that's what we need. We got it tonight and now we keep on going."

Sheffield United's match against Liverpool was the first of three successive Premier League home games. They are back in action on Wednesday against Aston Villa; kick-off 6pm. The Blades will then welcome Southampton on Saturday, live on Sky Sports; kick-off 3pm.

Liverpool also play twice on Sky Sports over the next week. They welcome Chelsea to Anfield on Thursday; kick-off 8.15pm and will then play Fulham next Sunday; kick-off 2pm.