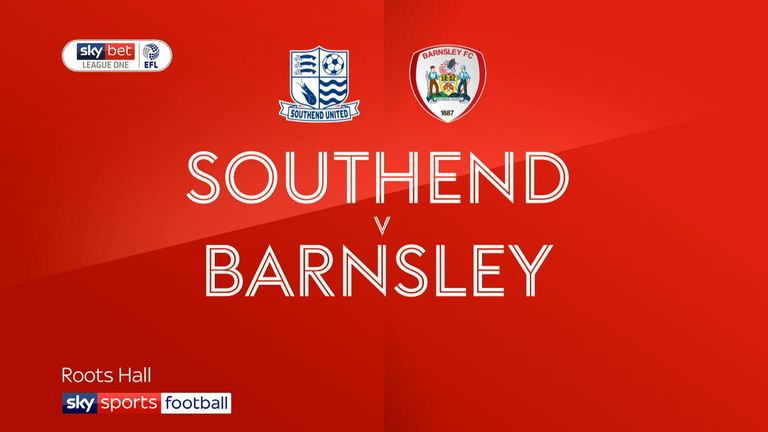 Highlights of the Sky Bet League One fixture between Southend and Barnsley.

Barnsley recovered from the first-half dismissal of Jacob Brown by scoring three second-half goals to cruise to a 3-0 win over Southend at Roots Hall.

Daniel Stendel's game plan took a hit after 35 minutes, when Jacob Brown was sent off for a reckless challenge on Sam Mantom, but five minutes into the second half, Cameron McGeehan fizzed the opener past Nathan Bishop.

The numerical disadvantage proved no obstacle for the visitors in the second half and they strengthened their grip on the game with 73 minutes played, as Cauley Woodrow added a clinical second, before substitute Jordan Green poked a third in stoppage time (90+3).

Boasting a 14-game unbeaten run heading into the game - the second-longest in the country - Barnsley clearly fancied their chances against a Southend side without a win since 12 January.

Their electric counter-attacking abilities were evident from an early stage, but while Mamadou Thiam struck two shots off target inside 15 minutes, their best chance came through Woodrow, who improvised on Brown's cross to test Nathan Bishop.

But 10 minutes before the break, the Tykes lost their best attacking outlet when Brown was dismissed by referee Kevin Johnson for a lunging challenge on Mantom inside the centre circle.

The premature dismissal was all-but erased from memory as the second half got underway; McGeehan was afforded a stroke of luck as he brought down a long-throw on his back. He swiveled in between the Shrimpers centre-backs and smashed into the bottom left corner.

Southend boss Chris Powell made one change from the side that drew 1-1 with Accrington last time out, as Michael Kightly replaced Steven Humphrys.

The hosts offered little in attack themselves but the game was effectively put beyond their grasp 17 minutes from time as Hannover loanee Mike-Steven Bahre slid a clever ball to Woodrow, that he side-footed home first-time.

Tykes stopper Adam Davies was called into action when Charlie Kelman took a cross down onto his chest, before Simon Cox flicked towards the near post, but the effort were in vain, as Green took advantage of a loose ball at the other end to tuck a third into the empty net.

Chris Powell: "We played against a very, very good side and we showed our inexperience and naivety. We didn't make the extra man count. We spoke about what to do and went through it as well but we let ourselves too open and Barnsley took advantage.

"I don't want to be derogatory to anyone but we are where we are with our squad and the injuries we have. We still had moments in the first half but we got punished in the second half by a team who I think will go up.

"It's huge, we need a reaction now and we're in a real dogfight. We have to take care of ourselves but it's a very big week coming up next week with three games."

Daniel Stendel: "It was one of the best performances of the season but we've played well in a lot of games. We've shown here how we can play and it was a good win.

"At half-time I said we could win the game but in the second half it was more important to play with heart. I'm so proud of the performance and in the end it was a deserved win. There's 11 games to go but we'll only look at the next one."

Both sides are next in action on March 9. Southend face Blackpool at Bloomfield Road, while Barnsley welcome Accrington Stanley to Oakwell.