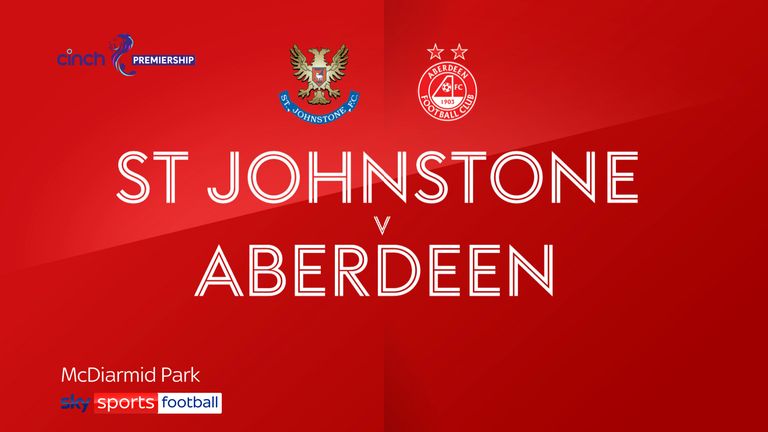 Highlights of the Scottish Premiership match between St Johnstone and Aberdeen.

A mostly uninspiring first half was followed by a better second 45 minutes in which play stretched.

And, with seven minutes remaining, Jenks - the 19-year-old on loan from Brighton - drilled a shot past home goalkeeper Zander Clark to give the visitors all three points and a trio of league wins in a row for the first time since September 2020.

Last season's double cup winners slumped to the bottom of the table with one win in nine games in all competitions and boss Callum Davidson will have to find a way to arrest the decline.

While Dons manager Stephen Glass kept the same team for the third time in a row, Davidson made four alterations in a bid to get back to winning ways.

Craig Bryson was pitched in against his old club after suspension, Glenn Middleton returned from injury and Liam Craig and James Brown also came into the side.

The first half was a mostly dull affair with occasional near misses.

Pittodrie defender Jonny Hayes' cross from the left in the 20th minute was almost sliced into his own net by Saints defender Jamie McCart from six yards out, with the home side surviving the corner.

Moments later, a deeper Hayes cross was met by Aberdeen attacker Jay Emmanuel-Thomas, but his powerful header was pushed away by keeper Clark.

The home side eventually posed some threat of their own.

In the 34th minute a cross by left wing-back Callum Booth found Bryson, but his goal-bound header from 14 yards was blocked by Aberdeen centre-back Ross McCrorie.

At the other end, Dons midfielder Lewis Ferguson got his head on a Funso Ojo corner at the near post, but sheer numbers of St Johnstone players blocked his effort.

It was the 54th minute before Aberdeen keeper Joe Lewis was called into real action.

Saints' right wing-back Shaun Rooney's speculative attempt from 30 yards was turned round the post by Lewis for a corner which came to nothing.

On the hour mark Aberdeen striker Marley Watkins was sent through by Emmanuel-Thomas but, with only Clark to beat from 16 yards, he scuffed his shot at the grateful goalkeeper. With that, the most clear-cut chance of the game was gone.

Saints came back again and striker Chris Kane's header from an Ali Crawford cross beat Lewis but hit the base of the post before being cleared to safety.

In the 70th minute Clark beat away a 25-yard drive from Dons attacker Ryan Hedges.

However, with seven minutes remaining Ojo clipped a free-kick into the Perth penalty box and when it was cleared only to Jenks, the substitute drilled a decisive low shot past Clark, although there was some suggestion the ball struck an arm in the build-up.

St Johnstone are at Rangers on Wednesday at 7.45pm, while Aberdeen are at Hibs on December 22 at 7.45pm.