St Johnstone's Europa League hopes ended with a 4-2 defeat by Galatasaray at McDiarmid Park as the visitors claimed a 5-3 aggregate win.

Scotland's domestic double cup winners had drawn 1-1 with the visitors in the first leg of their Europa League third qualifying round tie in Istanbul last week.

Striker Mbaye Diagne dampened the enthusiasm of the home fans when he put the visitors ahead on the half-hour mark before Saints levelled seven minutes later when 'keeper Ismail Cipe, under pressure from striker Chris Kane, was unable to keep the ball from crossing the line.

There was to be no continuation of the Saints fairytale from last season as Kerem Akturkoglu restored Galatasaray's lead in the 63rd minute with a fine finish before Sofiane Feghouli drove in a third, with substitute Emre Kilinc making it 4-1 in added time before Michael O'Halloran pulled a goal back.

Callum Davidson's men drop into the Conference League with a tie against LASK of Austria or Serb side Vojvodina in the play-off.

Galatasaray too strong for valiant Saints

It had been a long time since so many St Johnstone supporters, denied the chance to witness their historic Scottish Cup and League Cup final wins last season due to Covid restrictions, had packed out their own stadium although it was not quite full.

The home fans were glad to see captain Jason Kerr, who scored in the first leg from the spot, had recovered from a knock to take his place in defence, while James Brown, Murray Davidson, O'Halloran and Kane returned.

St Johnstone tried to force the pace from the kick-off but in the fifth minute it was home 'keeper Zander Clark who made the first real save of the game, keeping hold of a 20-yard drive from Feghouli before gathering captain Arda Turan's tame shot from 14 yards.

However, on the half hour, Fatih Terim's side struck when Akturkoglu sent Diagne racing through the middle and he outpaced defender Jamie McCart before slipping the ball through Clark's legs.

But it should have been no surprise that Saints soon responded. Ali McCann's corner from the right was headed back towards goal by Kerr and as Kane jousted with Cipe, the ball looped over the line, the goal given despite Patrick van Aanholt's despairing clearance.

An open encounter continued after the break and the visitors forged ahead again with a well-worked goal when Akturkoglu took a pass from Turan and raced on before beating Clark from eight yards.

Davidson brought on Stevie May and Shaun Rooney for Kane and Brown but the the tie slipped further away in the 70th minute when Feghouli drilled a shot low past Clark and into the corner of the net.

In the second of four added minutes, Kilinc took advantage of a mix-up in the St Johnstone box to hammer the ball in from close range before O'Halloran scrambled in a consolation for the home side. 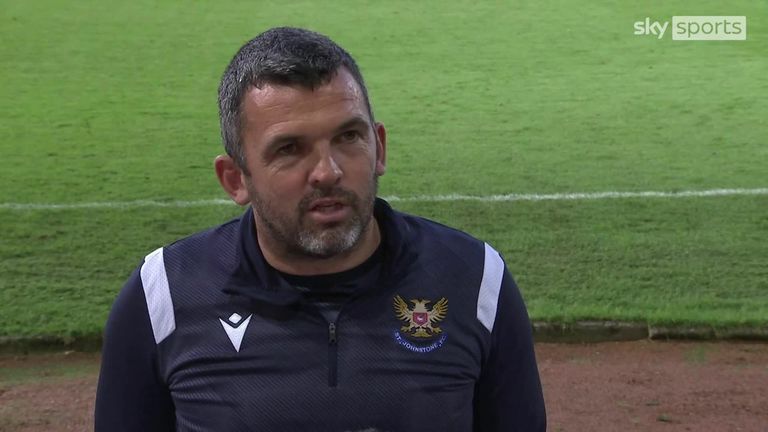 St Johnstone manager Callum Davidson says he is proud of his players despite a 4-2 defeat to Galatasaray and says the two-legged tie was a very valuable learning experience.

St. Johnstone manager Callum Davidson: "The players are disappointed. They are footballers and they want to win. I said in the dressing room, you can walk out the stadium with your heads held high. It was a great tie for us, a marquee tie and I thought we performed to a very good level.

"If you had told me two hours of football and we would be all square with Galatasaray, obviously at that point I couldn't be any happier. I thought the lads performed unbelievably well, went a goal down and we reacted really well. You saw at the end the lads never gave up. I can't ask for more than that.

"A couple of weeks ago they were trying to qualify for the Champions League and a team like St Johnstone took them that far into the tie. I was a little bit disappointed with the third and fourth goals, it probably takes the tie away from us, but I am really happy with the players.

"I think you saw the quality they had, the pass and movement, the one touch football round the corner, that is the quality they had and we knew that. They are a class team. I thought they were very good. I keep going back to the result in Istanbul. That was an unbelievable result to keep the tie going.

"Even when we went a goal down I thought we could be in trouble because they kept the ball so well, but all credit to the players. They kept fighting and even at the end, 4-1 down, they kept going."