Joe Shaughnessy's late leveller earns St Mirren a 1-1 draw at home to Hibernian; Hibs stay two points ahead of their hosts but could not earn a first win under caretaker manager David Gray, who replaced Jack Ross in midweek 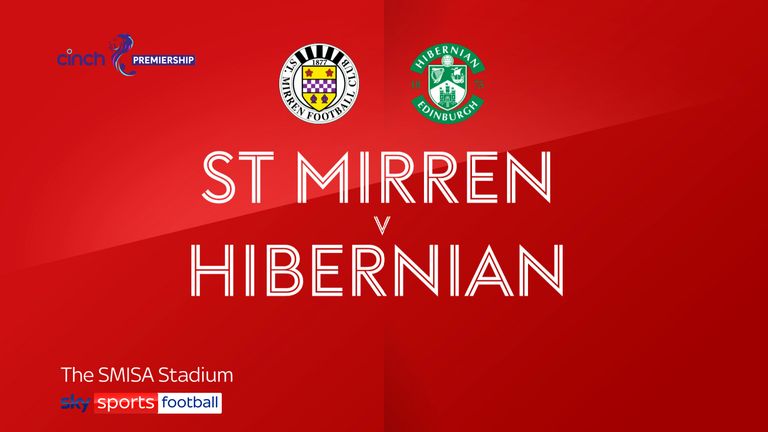 Highlights of the Scottish Premiership match between St Mirren and Hibernian.

Gray was handed the reins after former Easter Road boss Jack Ross was dismissed in the wake of Wednesday night's defeat to Livingston.

Hibs had looked on course for just their second win in 10 league games at St Mirren thanks to Josh Campbell's second-half strike.

However, Shaughnessy's goal salvaged a point for the hosts, although Jim Goodwin's men are still winless in nine games.

The Buddies were forced into one change from the side beaten at Aberdeen last time out, with the injured Eamonn Brophy replaced by Curtis Main.

It was the visitors who threatened first. Jamie Murphy capitalised on Charles Dunne's mistake to run in on goal but St Mirren goalkeeper Jak Alnwick did well to push the shot away.

Kevin Nisbet ought to have put Hibs in front midway through the first half but his header from Martin Boyle's cross went straight Alnwick.

St Mirren saw plenty of the ball in the first half but failed to create anything to trouble Matt Macey in the Hibs goal. A swirling wind and incessant drizzle did not help the flow of a game low in quality either.

A Hibs goal early in the second half livened things up. Macey sent Murphy running clear on the counter-attack and he in turn fed Boyle. His ball across goal was blocked by Dunne but fell nicely for Campbell, who stabbed home from close range.

St Mirren made three changes to try to get back into the game but it failed to make any immediate difference as Hibs easily soaked up the pressure and looked to hit on the counter.

The home side looked to have a good opportunity to equalise after Darren McGregor fouled Kristian Dennis on the edge of the penalty box. Jamie McGrath stepped up but sent the free-kick well over the crossbar.

Macey was finally called into making a save eight minutes from time. Scott Tanser sent over the cross and Main's diving header was pushed away by the goalkeeper.

Tanser, though, was the creator when St Mirren drew level three minutes from time, crossing for Shaughnessy whose half-volley beat Macey.