Report and free match highlights from the Sky Bet Championship clash between Stoke City and Bristol City at the bet365 Stadium as Jay Dasilva scored the only goal of the game to seal victory for the Robins. 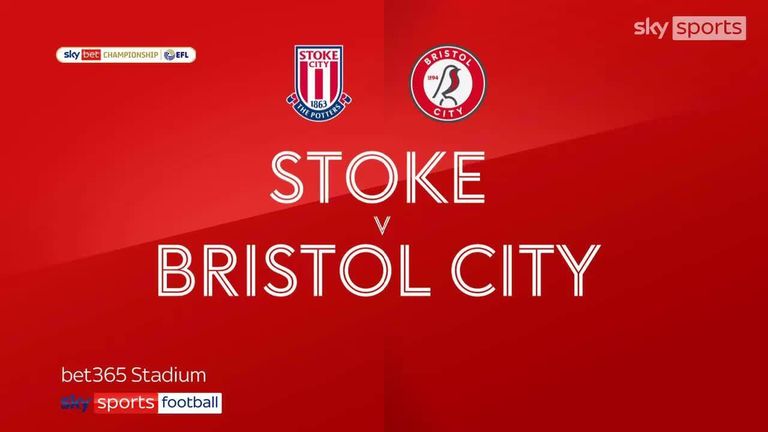 Highlights of the Sky Bet Championship match between Stoke City and Bristol City.

Jay Dasilva's freak goal was enough to take the spoils as Bristol City edged Stoke 1-0 at the bet365 Stadium.

An evenly-fought contest sparked into life in the final 10 minutes, with a Lewis Baker free-kick striking the crossbar as the Potters attempted to break the deadlock.

However, the travelling Robins - who had only won one of their last 14 away games dating back to October - snatched a late winner when Dasilva's cross sailed into the back of the net.

The Potters, in pursuit of a third consecutive home league win, started brightly and had a golden opportunity to open the scoring inside six minutes.

On-loan Manchester City youngster Taylor Harwood-Bellis was in the right place at the right time to meet a flicked-on Stoke set-piece, but the defender miscued his strike from a promising position.

The visitors also lacked the finishing touch in a frenetic opening quarter of an hour, with Antoine Semenyo racing through on goal before blazing wildly over.

An in-form Baker, who has been involved in 10 goals in 16 appearances since his January switch, prodded an instinctive effort narrowly wide of the post as the hosts grew in confidence.

Jacob Brown looked to capitalise on their dominance when he rose highest to meet a pinpoint Joe Allen delivery, but Daniel Bentley did well at full-stretch to thwart the Potters' talisman.

However, it was the visitors who finished the half strongly and should have returned for the interval in the lead.

An Andreas Weimann delivery to the far post was redirected back into the danger area by Chris Martin, with young defender Will Forrester nearly converting into his own net.

Stoke stopper Jack Bonham then parried a powerful Martin strike straight into the path of Semenyo, yet the latter failed to get the ball from under his feet and convert on the rebound.

The Potters returned for the restart with the wind in their sails and a Michael O'Neill double substitution after the hour mark nearly inspired the game's opener.

Fresh off the bench, on-loan Bordeaux forward Josh Maja almost provided an immediate impact, but his floated delivery just eluded the onrushing Baker in the box.

Stoke then came closest to breaking the deadlock with Baker again involved, yet the midfielder's delicate free-kick from a dangerous position struck the crossbar.

The 728-strong travelling support tried to stir a late Robins winner, with Weimann forcing a smart save from Bonham, and the efforts of a vocal away crowd eventually paid off.

As Dasilva looked to tee up a team-mate in the Potters' box, his wild cross sailed beyond an unexpectant and wrong-footed Bonham.

The result marks a second win in six for Bristol City, while the Potters suffered another setback on home soil.

Bristol City's Nigel Pearson: "The most important thing was going to be some of the qualities we were missing last week, so I said about personality and I thought we showed it in abundance today. It was a collective effort, a bit gritty against a side who have got quite a bit of quality, but they must be pulling their hair out - the two games we've played against them this year, I'm sure that they'll feel they could've won both games but we've had those feelings many times this year.

"It was always going to be about the way that we approached it, even if we had drawn or lost it, that still would have been the most important thing for me. It's nice to get rewards for hard and honest endeavour, so it was a good away performance. We were stubborn, organised and counter-attacked with some real threat. There was a determination that everybody could see out there. I'm really pleased for the players today."

"We didn't play at the right level; we shouldn't have lost the game, but we didn't play with enough decisiveness. You've got to have the character to play; it's not that we didn't try but we were too indecisive. We missed really good opportunities to create really good chances, and that was the most frustrating thing, to be honest. We were making bad decisions and probably what we don't have in our team is a dribbler so you're constantly having to combine to try and break lines, and that's proving to be difficult at the minute."