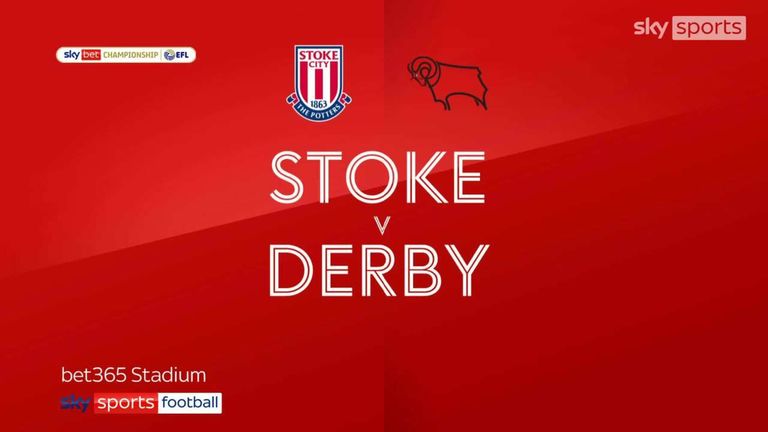 Highlights of the Sky Bet Championship match between Stoke and Derby.

Colin Kazim-Richards was Derby's match-winner for a second successive game as he came off the bench to earn Wayne Rooney's side a 2-1 Championship win at Stoke.

The 35-year-old slotted home an 84th-minute winner with his left foot, seven minutes after former Rams favourite Tom Ince looked to have rescued a point for the hosts, to earn Derby their third straight win.

Kazim-Richards had also been the hero in Derby's victory over high-flying West Brom three days ago.

His third goal of the season, which completed a league double over Stoke for the division's bottom side, came after he replaced first-half scorer Luke Plange.

Nineteen-year-old Plange, making only his third first-team start, fired County into a deserved 16th-minute lead with the second goal of his senior career.

Victory marked the first time Derby had won three straight games since January and lifted them to within 11 points of safety.

Despite their 21-point deduction for entering administration, there is clearly still plenty of fight in Rooney's improving side.

In contrast, Stoke largely disappointed to remain frustratingly out of the top seven.

In action for the first time in 19 days, Michael O'Neill's side made a predictably sluggish start.

Jozwiak was one of three players returning to the County ranks after coronavirus.

And, with referee Matt Donohue playing a good advantage after a tackle on skipper Tom Lawrence, it was the Pole's clever pass that unlocked Stoke's usually solid defence for the opener.

Plange did the rest, running on to shoot low through Davies' legs.

It took the Potters until the 35th minute to threaten the visitors' goal as Mario Vrancic and Tyrese Campbell combined for Josh Tymon to lash a 20-yard left-footed drive fractionally wide.

Stoke started the second half with greater intent and were convinced they should have received a 51st-minute penalty for handball.

Tymon's cross struck Phil Jagielka, another of the Derby contingent returning from a Covid lay-off, but Donohue waved aside home protests, including those of frustrated boss O'Neill.

Plange and Vrancic traded bookings, with the youngster's foul his last action before being replaced.

Ince, who scored 25 times in 83 appearances for the Rams, had been on the field just eight minutes when he drilled home a left-footed finish for the equaliser.

Derby, though, were not finished and, after Stoke were caught in possession, the ball was worked through for Kazim-Richards to secure another three points.

Stoke's Michael O'Neill: "We could not get any consistency in our play throughout the game. Our attitude to the game was good, but we lacked quality in our play. We pressed hard, but when we won the ball we turned it over again. There were too many stray passes and unforced errors. We were poor in possession and that was the biggest factor.

"We didn't get any rhythm which gives the opposition hope and confidence. We forced the game more in the second half and got the equaliser. You feel then you are capable of going on to win the game. But we gave away a bad goal again, losing the ball in a bad area and how we defended after that was also poor. And that was the deciding factor in the game."

Derby's Wayne Rooney: "We have always believed there is a possibility we can stay in this division. But we know it is a small chance and we are not getting carried away. However, full praise must go to the players because their commitment this season has been incredible. These three wins now are at the back of our minds and we must give our full attention to Reading on Monday because that is an important game."

"It is always difficult naming a team when there are players like Colin who scored in his previous game. But I had to go with my instinct and what I believed was right for this game. Plange causes defences trouble with his movement in behind. That is a real strength of his, plus he is a composed finisher."