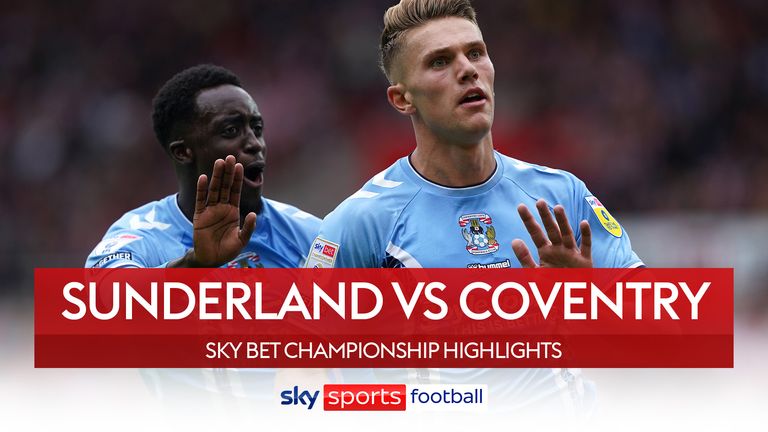 Highlights of the Sky Bet Championship clash between Sunderland and Coventry

Viktor Gyokeres grabbed a Coventry equaliser six mintues from time as Sunderland were forced to settle for a 1-1 draw on their return to the Championship after a four-year absence.

The Black Cats looked to be heading for an opening-weekend victory after Jack Clarke's 12th-minute header opened the scoring at the Stadium of Light.

But, after Coventry spent most of the second half camped in the Sunderland half, Gyokeres drilled a clinical finish into the bottom corner to earn the visitors a point.

Alex Neil's starting line-up featured 10 of the players that helped Sunderland out of League One last season - centre-half Dan Ballard was the only newcomer to start - and the Black Cats could not have wished for a better start to life in the Championship.

Just 12 minutes had gone when wing-back Lynden Gooch surged past Jake Bidwell and stood up an inviting cross from the right-hand side. Clarke, who turned his previous loan move from Tottenham into a permanent transfer earlier this summer, was perfectly positioned at the back post to nod home.

Sunderland started with pace and purpose, and Clarke almost claimed a second goal midway through the first half as he received the ball from Alex Pritchard and swept in a crisp first-time effort that Simon Moore saved with his legs.

Coventry were rocked by the intensity of their opponents' opening salvo, but Mark Robins' side gradually settled into the game and began to create chances of their own as half-time approached.

Gyokeres shanked a shot wide after breaking clear of Danny Batth down the left, and the visitors would have equalised eight minutes before the interval had it not been for a piece of brilliant goalkeeping from Anthony Patterson.

Jonathan Panzo's long-range strike was flying in, but Patterson's fingertips diverted the ball onto the crossbar. Matty Godden should probably have done better with the rebound, but the ball flew at him quickly and he could only direct a header wide.

Godden failed to convert an even more inviting opportunity eight minutes into the second half as Sunderland were punished for some lax play on the edge of their own area. Gustavo Hamer robbed Dan Neil of possession, but while the ball broke invitingly for Godden, the Coventry forward could only sweep a first-time effort wide.

Sunderland's second-half threat largely revolved around counter-attacking moves, and the hosts went close to extending their lead just before the hour mark. Clarke teed up Ross Stewart for a first-time effort that was heading in before Moore tipped the ball over the bar.

Coventry piled on the pressure as the half wore on and claimed a deserved 84th-minute equaliser.

It was a superb solo goal from Gyokeres, with the Sweden international creating a pocket of space 20 yards out before firing a fine finish into the bottom right-hand corner.

Sunderland's Alex Neil: "I thought we gave a good account of ourselves. I thought we were organised, and we made it really difficult for them. Let's be honest, we'd be talking about a great result here if it wasn't for one moment of quality.

"We switch off, don't get down the line quick enough and let him turn, but even then, it's a great goal. It's not as if we've made an error and they've had a tap in. The lad's had to turn, dip past two players and bang the ball in the bottom corner. That's the quality of the Championship.

"We've still got a lot of work to do in the window in terms of strengthening the squad, but I thought we moved the ball really well and probably caught Coventry a bit cold in terms of how we started the game. All in all, for what our players offered up, I was really pleased with our effort and how we went about it."

"I'll take a point and move on. The change we made gave us a leg up and gave us a bit of impetus in the game. We added a bit of pace and managed to create one or two things, then we got the goal through Vik. Then we looked like we
could build that pressure to go on and get another one.

"We had to do better, and I thought we started to do a bit better in the second half. The change in shape and personnel did the trick in terms of opening them up a little bit more. We've got more options once we get up to speed now."

Sunderland travel to Ashton Gate to take on Bristol City at 3pm on Saturday August 6, while Coventry host Rotherham at the Coventry Building Society Arena at 3pm on Sunday August 7.