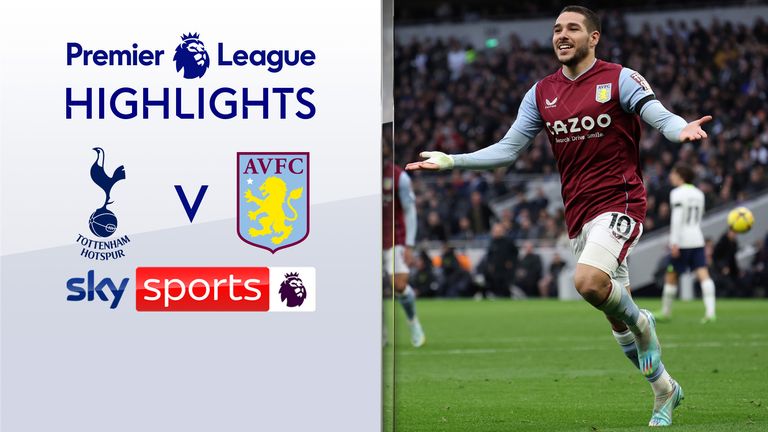 FREE TO WATCH: Highlights from Aston Villa’s win against Tottenham

Aston Villa deepened Tottenham's woes as goals from Emiliano Buendia and Douglas Luiz at the Tottenham Hotspur Stadium condemned the hosts to a fourth Premier League loss in seven games.

Spurs, needing to win to jump back above Manchester United into fourth place, produced another listless first-half display and fell behind for a 10th consecutive game when Emiliano Buendia pounced on an error from the returning Hugo Lloris shortly after the break.

Aston Villa defended resolutely, keeping Spurs at arm's length throughout, and doubled their advantage when Douglas Luiz, whose long-range effort had forced the mistake by Lloris for the opener, finished off a slick team goal from John McGinn's pass.

Spurs, without Dejan Kulusevski due to a minor ankle injury, could muster little in response, failing to even register a shot on target in the second period, with Harry Kane a peripheral figure, Heung-Min Son again lacking sharpness, and the home fans airing their frustrations with boos at the final whistle.

The result ramps up the pressure on head coach Antonio Conte and allows former Arsenal boss Unai Emery to extend his unbeaten record against Spurs to four Premier League games, the victory putting Villa within two points of the top half.

Man of the match: Douglas Luiz

How Spurs suffered another setback

Conte had implored his side to start quickly following their recent run of sluggish first-half performances but once again they offered precious little for their fans to get excited about.

Ollie Watkins threatened for Villa when he got in behind the Spurs defence from a routine ball over the top and dragged a shot wide, while his opposite number Kane did not even have a touch of the ball until the 20th minute. 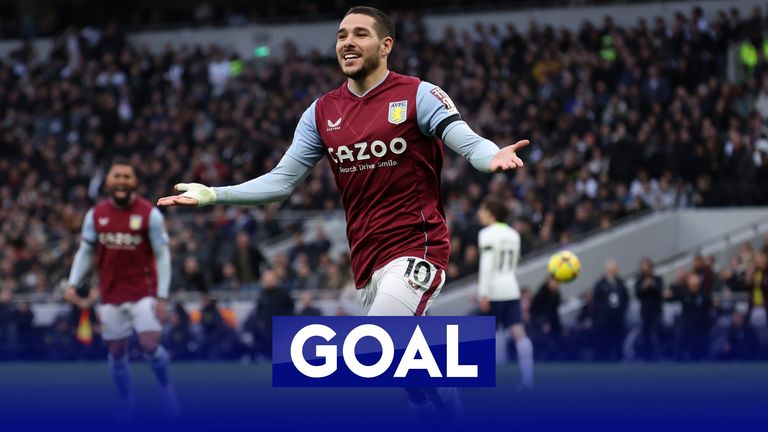 It was Son, though, who best encapsulated Spurs' frustrations. The South Korean could be seen throwing off his protective face mask in the opening stages but his recent sloppiness continued in and around the opposition box.

On one occasion, a loose first touch prevented him from capitalising on a poor Villa clearance and, later in the first period, he had the chance to put Kane through but sent his pass too close to Robin Olsen, who kept his place in goal for Villa ahead of the returning Emiliano Martinez, who was named on the bench.

Spurs finally fashioned their first meaningful opportunity when Ivan Perisic latched onto a Clement Lenglet ball over the top and crossed for Kane, whose downward header was nodded off the line by Ashley Young.

Olsen was well protected otherwise, though, with Villa deservedly taking the lead just five minutes after the break when Lloris spilled Douglas Luiz's long-range effort, allowing Watkins to steal the ball and cut it back for Buendia to apply the finish.

Perisic fired over with one of few Spurs opportunities as Conte's men laboured in response, the second-half improvement that rescued a point against Brentford in their last game on this occasion failing to materialise. 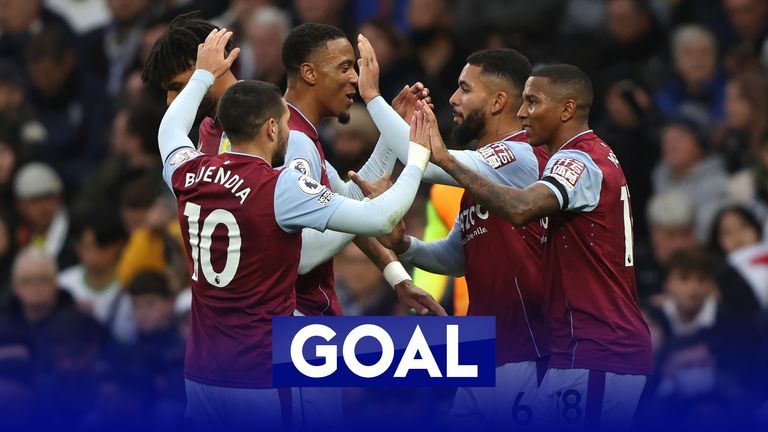 Villa continued to look the more threatening of the two teams and they got the second goal their performance deserved when Douglas Luiz expertly controlled McGinn's perfectly-measured pass and clipped a cool finish beyond the despairing Lloris.

Emery's side continued to frustrate the hosts and looked the more likely side to score in the closing stages, with many of the home supporters heading for the exits before the final whistle, which prompted another show of dissent from those who remained in their seats.

Douglas Luiz was named player of the match after scoring Aston Villa's second goal and playing a crucial role in the opener, his long-range effort forcing the error from Hugo Lloris.

The Brazilian is relishing greater attacking licence under Unai Emery. He had five efforts on goal over the course of the game - the most by any player - and his goal comes after assists in his last two outings against Liverpool and Brighton.

His distribution was tidy as he completed 92 per cent of his passes and there were important defensive contributions too, his tackles and interceptions helping to keep Spurs at bay and ensuring there was only one winner in the midfield battle. 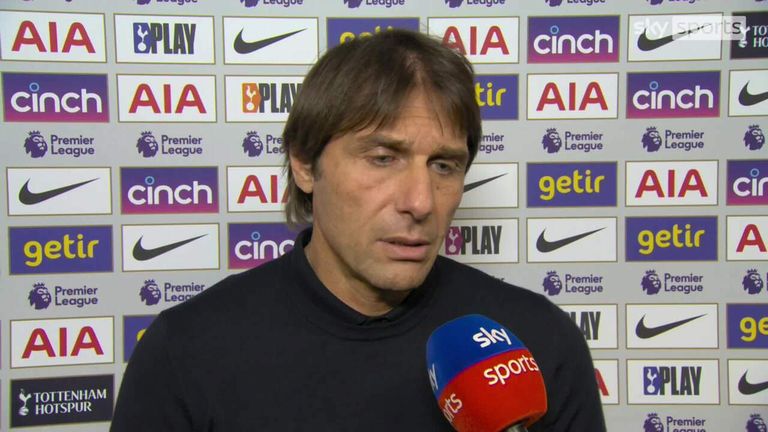 "From the start until the end, I have seen the right commitment, intensity and desire to win the three points and win duels and run.

"If you ask me, football is strange. In the first half, we dominated the game, although we didn't create chances to score, because we found a team that defended really, really deep, with 11 players.

"Then in the second half, we started in the same way and then it happened that we conceded another goal. We are not so lucky with the goals we are conceding in this period.

"This goal changed the situation, the feeling and the confidence of the players. They didn't feel they deserved to be 1-0 down after a big effort in the first half.

"Then, in other [games], we were good to come back. Today, we didn't do this.

"Then the atmosphere became warm and when you are 1-0 down the expectations are to score goals, to win the game. And then you can pay something emotionally."

Emery 'so happy' with performance and result 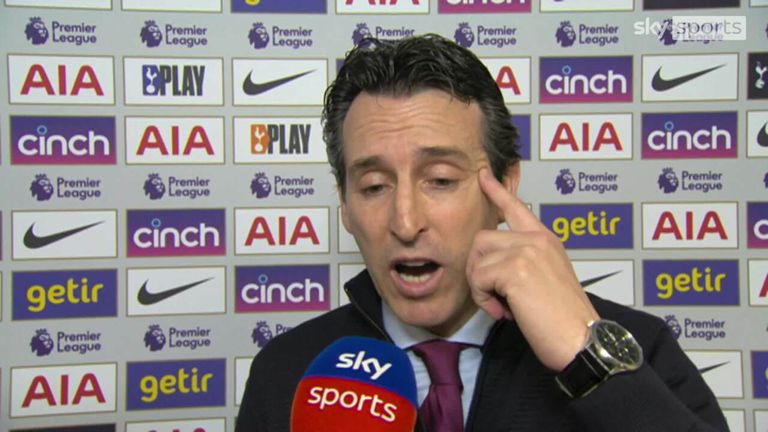 Aston Villa head coach Unai Emery praised his side for their defensive performance, after they picked up an impressive 2-0 win away to Tottenham

Aston Villa boss Unai Emery, who has now taken nine points from his first four games in charge, told Sky Sports: "We are so happy. I think we competed very well.

"We were speaking after the first half, we were struggling a little bit defensively but they didn't create chances and rarely good chances. We had only one, Watkins' action in the first 15 minutes.

"But in the second half we kept with our plan, and we scored one goal and that gave us confidence to keep moving ahead in our mentality, to our defence, and when we have option to have ball possession and then attack.

"To score the second goal was amazing because in that moment we were thinking the match and three points was for us.

"We have to build a team thinking we can control the match, sometimes with ball and sometimes without the ball. Today we needed defensively to be strong, together and try to arrive in some moments.

"It's normal they had some chances - not a lot - but we worked the whole week [for what] we can expect [from] the match today. The goalkeeper as well, after this clean sheet and with his performance, which helps us to believe in our goalkeepers, not only in Martinez, as well with Robby. I think today is OK to add the confidence in the team."

Tottenham are away to Crystal Palace in their next Premier League game, live on Sky Sports Premier League from 7.30pm on Wednesday, with kick-off at 8pm.

Aston Villa welcome Wolves to Villa Park on the same evening, that game also kicking off at 8pm.