Free highlights: Everton win away at a top-six side for the first time in 40 attempts; Tottenham poor on opening day FREE TO WATCH: Highlights from Everton's win over Tottenham in the Premier League.

Jose Mourinho's Tottenham were "lifeless, flat" and "walking around the pitch sulking" for large chunks of the second half, said Sky Sports' Gary Neville on commentary, with Spurs registering just nine tackles to Everton's 18, and Harry Kane touching the ball only twice in the Everton box.

Both sides had chances in a goalless first half; Richarlison rounded Hugo Lloris but blazed over, before both Dele Alli and Matt Doherty were denied by Jordan Pickford at the other end.

Everton's winner was coming, and Calvert-Lewin rose brilliantly to power a header into the top corner from Lucas Digne's deep free-kick, with Spurs' efforts to form a comeback lacking as the visitors comfortably held on.

For Everton, optimism will be high as they won away at a top-six side for the first time since December 2013, but there were concerning signs for Mourinho as he lost on the opening day of a league season for the first time as a manager.

"The struggle started in the way we pressed or, I will say, in the way we didn't press because our pressure up was very poor," Mourinho told Sky Sports. "I would say it was lazy pressure and when you have lazy pressure, you don't press and you let opponents build from the back."

Man of the match: Allan

How Everton powered past flat Spurs

Everton had more of the ball and the better of the early stages, and should have been ahead as Ben Davies' loose pass across the defence found Richarlison through on goal after he beat Toby Alderweireld for speed. But having rounded Hugo Lloris, the Brazilian skied his finish from an acute angle.

Everton were then nearly punished by Spurs' counter as Heung-Min Son ignored the run of Harry Kane to slip in Dele Alli, but his fierce shot from just inside the box was tipped over by Pickford.

Debutant James Rodriguez curled inches wide of the far post for Everton with a left-footed effort before the break, while Matt Doherty, also making his debut for Spurs, forced a good block from Pickford low down after Kane's fine scooped pass over the defence.

Mourinho, whose side struggled to get their midfield on the ball in the first half, brought on Moussa Sissoko for Alli at the break, but the Frenchman played higher up the pitch than expected as Everton continued to press, claiming a deserved opener 10 minutes after the restart.

Digne's free-kick from deep on the left was met superbly by Calvert-Lewin, who got above Eric Dier, and his bullet header found the top left corner, leaving Lloris rooted. Mourinho complained that the free-kick had been taken four yards ahead of where the foul took place, but his protests were ignored. 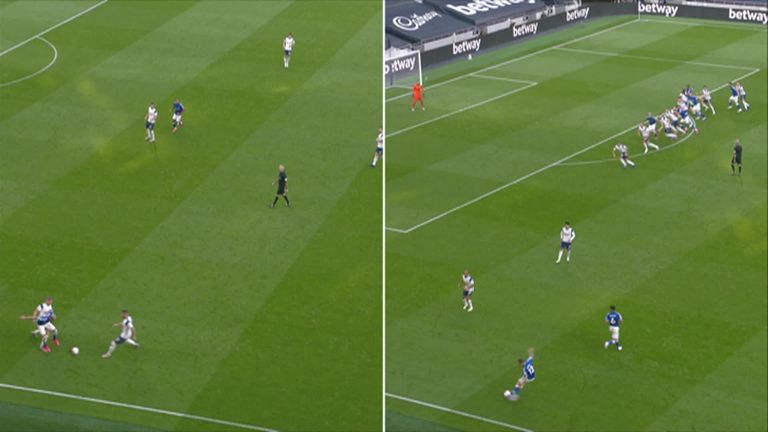 Dominic Calvert-Lewin scored Everton's winning goal against Spurs but Jose Mourinho was not happy with the placement of the free-kick which led to the goal as he complained that it was taken four yards ahead of where the foul took place.

Spurs' were expected to up the ante thereafter, but Everton had better chances to double their lead as Richarlison curled two half-chances wide of the far post.

Everton tired, but so did Spurs, and the game petered out as Mourinho lost a campaign opener for the first time in 19 seasons.

For two teams looking to build following disappointing campaigns in 2019/20, Carlo Ancelotti's side will be the happier - new signings Rodriguez and man-of-the-match Allan were superb - on what was a concerning opening day of the season for Mourinho's Spurs.

Spurs boss Jose Mourinho: "The struggle started in the way we pressed or, I will say, in the way we didn't press because our pressure up was very poor. "I would say it was lazy pressure and when you have lazy pressure, you don't press and you let opponents build from the back and then they have players with incredible quality, which is not just Everton, it's almost everybody in the premier League. When you let them play from the back then they are comfortable with the ball."

Everton boss Carlo Ancelotti: "It was good, the game was what I expected from the team. It was not easy but we had energy, quality. The performance was brilliant. We had difficulties at the beginning but we were comfortable on the pitch. 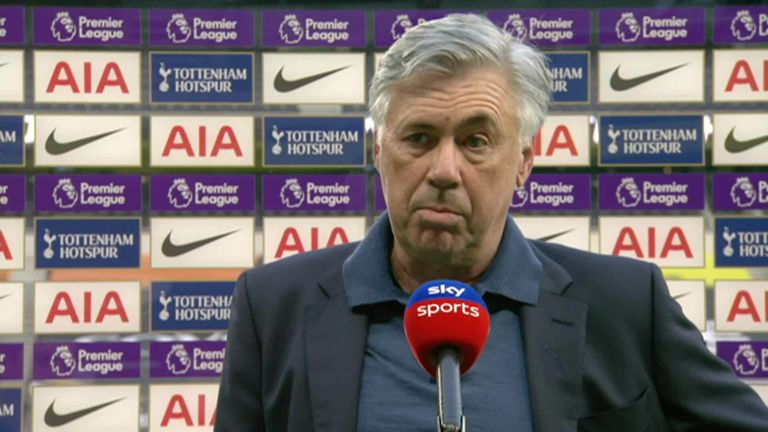 "The players that can play football, they don't need a lot of time to adapt. James knows what he has to do, Allan and Doucoure the same. I just said show your quality and they did. We had a good combination in midfield. Last season we had players with quality on the ball but you also have to play without the ball."

"There are a few problems if we are honest. Matt Doherty, for example. You sign a player who has played all his career at Wolves as a wing-back and then you play him in a back four. For some, that might not seem a lot or that much of a difference but it totally is.

"This is only week one and we need to be careful. Hojbjerg didn't have his best game, but it is his debut and l don't want to jump into his nightmare. When he gets his fitness and plays more games, l hope he will improve. But when l look at what Spurs need, is he the sort of player they need? It looks like it is very easy to play against that Tottenham midfield in every aspect."

"James Rodriguez has been very good. He's been a different level on the ball, class. With Abdoulaye Doucoure and Allan in that midfield, it gives the likes of Gylfi Sigurdsson, Andre Gomes and Rodriguez a bit more freedom to not have to do defensive duties.

"It feels like a big moment for Everton. Watching them beat a 'big six' team away from home, I almost feel like going out and celebrating for them myself tonight. Take them out tonight, Carlo, the lads deserve it! He'll know how big a moment this is."

Tottenham now go to Lokomotiv Plovdiv on Thursday in Europa League qualifying at 5pm, before a trip to Southampton at midday on Sunday.

Everton host Salford City in the Carabao Cup second round on Wednesday evening, live on Sky Sports Football at 8.15pm, and then host West Brom at 12.30pm on Saturday in the Premier League.