Match report and highlights as Watford hang on with 10 men to beat Burnley at Vicarage Road and go top of the table; Tom Cleverley's goal in first-half stoppage time earned the Hornets the three points; Hassane Kamara sent off for Watford late on but Burnley unable to find equaliser 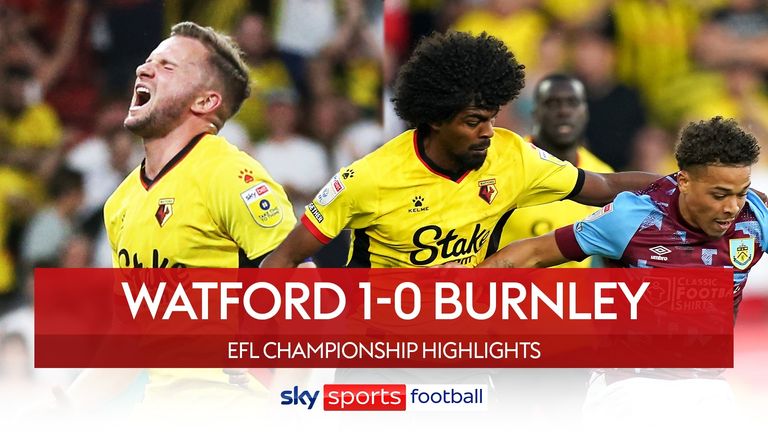 Highlights of the Sky Bet Championship match between Watford and Burnley

Tom Cleverley's first-half goal was enough for 10-man Watford to see off Burnley at Vicarage Road and move to the top of the Championship.

Rob Edwards' side have begun their campaign with two wins and a draw from their first three matches and, while they could be toppled by the end of the weekend, their status as league leaders represents an impressive start to the former Forest Green manager's tenure.

The game's only goal came in stoppage time at the end of a first period in which both sides lacked quality in the final third, but Cleverley showed his team-mates how it's done when he coolly slotted Ken Sema's pullback from the right past Arijanet Muric and into the bottom corner.

Burnley bossed the second half as they searched for an equaliser but couldn't find a way past the impressive Daniel Bachmann - even after Hassane Kamara's late red card for a professional foul - meaning Vincent Kompany's side have just four points and two goals from their first three matches back in the second tier.

The drama in which this game ended was in stark contrast to a sterile first half in which the most entertainment came from both goalkeepers' attempts to play the ball out from the back.

The half looked like it would only provide Ismaila Sarr's rash finish after Joao Pedro's impressive cross as a talking point until Cleverley showed some much-needed composure to put Watford in front.

The second half saw the Hornets spend most of their time on the back foot as Burnley finally displayed some urgency, but they found Bachmann in more reliable form with his hands than he was with his feet.

The Hornets 'keeper first denied Josh Brownhill at point-blank range before then blocking Conor Roberts' volley after the full-back was picked out by Ian Maatsen.

Kamara then increased the pressure on his side when he was dismissed for tugging back Clarets debutant Nathan Tella but Bachmann could not be beaten, keeping out the resulting free-kick and a tame late effort from Luke McNally.

When Burnley finally beat Bachmann they couldn't beat the crossbar, which Brownhill found when his looping volley in stoppage time ricocheted away and, with that, so did his side's hopes of taking anything from the game.

Watford's performances under new boss Edwards may not be pretty but they are certainly proving to be effective, with the Hornets recording as many wins (two) in their last two matches at Vicarage Road as they had in their previous 20.

The home side were forced to launch a rear-guard action for much of the game against Burnley but still emerged from the 90 minutes with glory and the all-important three points.

Edwards' side recorded an expected goals total of just 0.29 against the Clarets and just one shot on target, while they conceded nearly two-thirds of the total possession to their opponents.

It was the same story in Watford's draw at West Brom on Monday and, including their opening-weekend win over Sheffield United, they have hit the target with just eight shots so far this season.

But Watford's supporters have endured some testing times at home over the past 12 months and their euphoric reaction to the final whistle showed they are just delighted to be watching a winning side, regardless of how those wins come about.

Fans and manager alike will also be pleased at how their side brushed off the loss of forward Emmanuel Dennis - who Edwards confirmed is set to join Nottingham Forest on a £20m deal and was left out of the squad - on their way to victory.

The performance of debutant Hamza Choudhury - who only signed on loan from Leicester on Wednesday - also delighted Edwards, who added that he expects Aston Villa striker Keinan Davis to join his squad imminently in a move that will continue the feel-good factor in Hertfordshire.

Man of the match: Daniel Bachmann 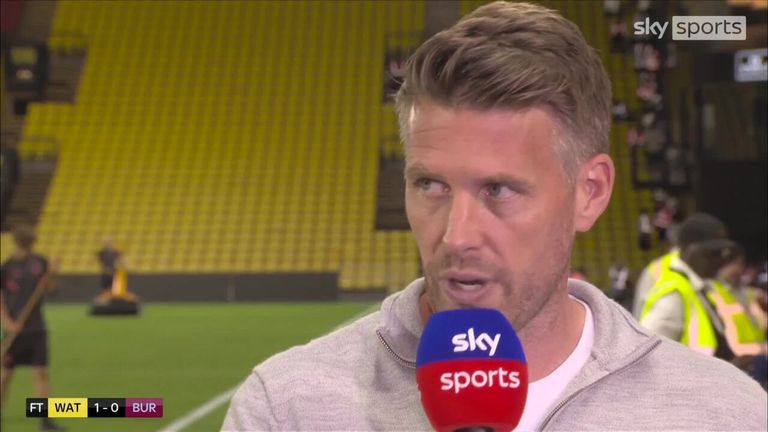 Speaking to Sky Sports, Edwards hailed his side's "character" following their tight 1-0 win, saying: "I feel really pleased obviously. It was another tough game - we've had three of them so far. We've had to show three different faces in each of those games.

"I'm really proud of the players given the circumstances within the game. We had to show a lot of resilience again.

"We needed our goalkeeper to make some wonderful saves. We had to put bodies on the line and we fought for each other. We need that as we know we have talent but we need that fight and make the running for each other.

"We're not a team at the moment that's going to dominate every game, not right now, but we'll get better. It's the character and the quality at the right times that pleases me."

Kompany: Difference was the width of a goalframe

Kompany said Brownhill's late effort that came back off the crossbar proved how fine the margins between success and failure at Burnley's level can be, although he did concede his side had "nothing" in the first half.

"Look, in the first half they were better than us we," he said. "We couldn't get going. We didn't concede chances but they were threatening. We put our bodies on the line, blocks, tackles, all that stuff, which is the basics in the Championship.

"But in the first half there was no threat, nothing. I think that will improve though."

Cleverley: Birthday goal is what you dream of 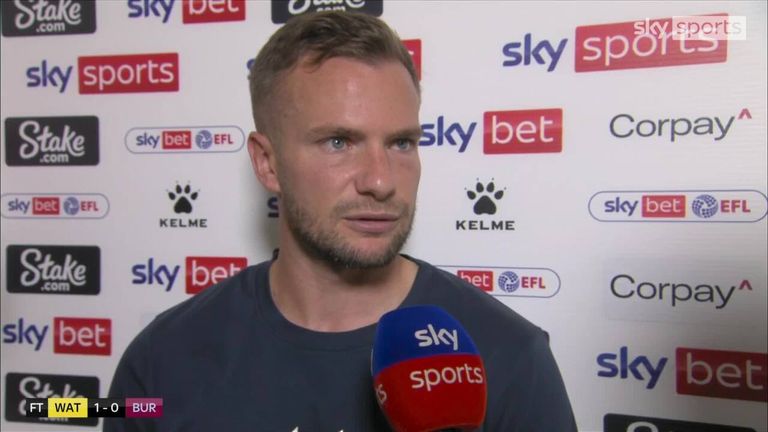 Cleverley's winning goal was his first since January 16 2021 and happened to come on the day of his 33rd birthday, after which the midfielder told Sky Sports: "It's what you dream of when you wake up this morning."

Cleverley also allayed concerns over the calf injury that forced him to come off at half-time, saying: "It wasn't the knock for the goal which I came off for.

"I've been managing a few aches and pains with my old age. I knew it was going to be a problem for me to play the full 90 and that was accelerated a bit at half-time. But the lads dug in well and really made my birthday a good one.

"I had a bit of a calf issue during pre-season when I didn't play too much so it was just a precaution.

"We used the full squad today and I felt we showed a real togetherness."

Watford face back-to-back away games, starting with a trip to Birmingham on Tuesday followed by a fixture at Preston next Saturday. The Hornets will then return to Vicarage Road to play MK Dons in the Carabao Cup second round on August 23.

In contrast, Burnley face back-to-back home matches against Hull on Tuesday and Blackpool next Saturday before also then turning their attention to the Carabao Cup, where they travel to Shrewsbury for their second-round tie on August 23.