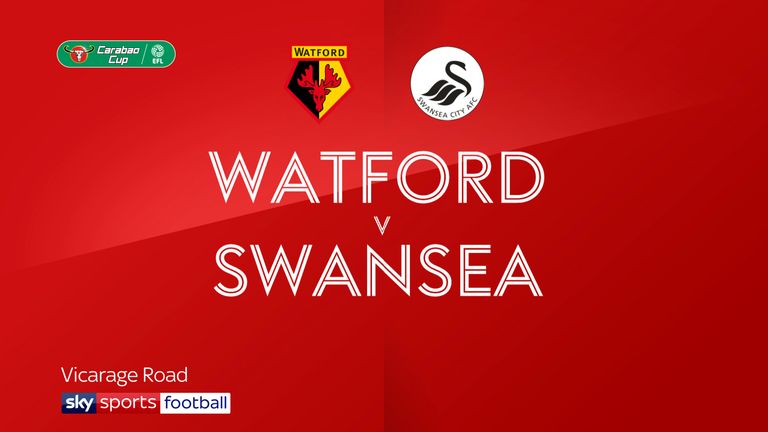 Highlights from the Carabao Cup 3rd round as Watford faced Swansea

Danny Welbeck scored his first goal for Watford as they avoided a second humiliation in four days by beating Swansea 2-1 at Vicarage Road after Roberto Pereyra's late winner.

The Hornets, still smarting from their 8-0 mauling at Manchester City on Saturday, edged past the Sky Bet Championship side in the Carabao Cup third round.

Welbeck headed in the opener and had a hand in Roberto Pereyra's winner after Swansea threatened an upset when Sam Surridge equalised.

They held on for a first win for Hornets boss Quique Sanchez Flores since he returned for a second spell in charge.

Flores used his programme notes to again apologise to the Watford supporters who travelled to City and admitted "what happened in Manchester was hard to accept".

The Spaniard made 10 changes to his starting line-up, with midfielder Abdoulaye Doucoure the sole survivor, although Hornets fans may have felt the whole team should have been forced to play again.

Watford made the breakthrough in the 28th minute - which was around 10 minutes longer than it took City to score five on Saturday, when Welbeck opened his account.

The 28-year-old, twice a League Cup winner with Manchester United, had already sent one header into the side-netting.

But when Welbeck rose at the near post to meet Pereyra's corner he guided it into the net with the help of a deflection.

It was a first goal in 11 months for the former England player, released by Arsenal in the summer after injury prematurely ended his season.

Early in the second half, Nathaniel Chalobah found Andre Gray free in the area, 15 yards out, but his shot was well kept out by Swans 'keeper Kristoffer Nordfeldt.

Swansea, among the Championship's early pace-setters, were inches from taking the lead when Connor Roberts' goal-bound header was acrobatically cleared off the line by Christian Kabasele.

Then George Byers, a Watford academy graduate who managed eight minutes in the first team before moving to Wales, drove a shot narrowly over the crossbar.

But the winner arrived with 11 minutes remaining, sub Gerard Deulofeu whipping in a low cross and Welbeck helping it on with Pereyra on hand to tap home.