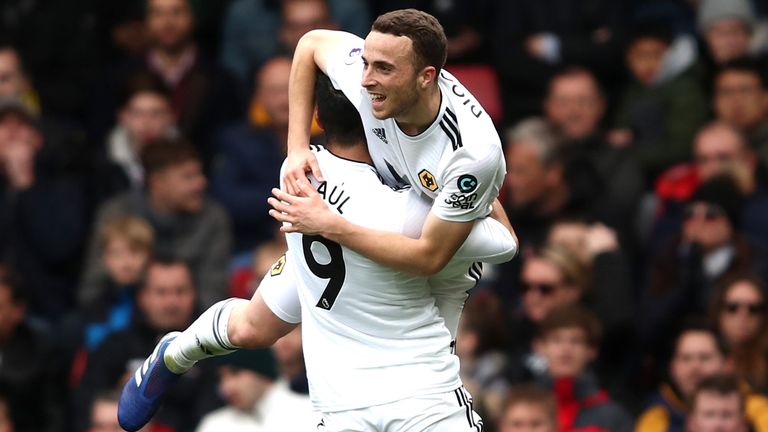 Wolves strengthened their hold of seventh place in the Premier League by beating rivals Watford 2-1 at Vicarage Road.

Raul Jimenez headed the visitors ahead four minutes before the interval with his 13th goal of the season, a Premier League record for Wolves.

However, Ryan Bennett's mistake gifted Andre Gray an equaliser four minutes into the second period, only for Diogo Jota to take advantage of another error - this time from Ben Foster - to win it for Wolves with 13 minutes to play.

As a result, Nuno Espirito Santo's side stay seventh in the table - which will bring European football next season if Man City win the FA Cup - while Watford drop to ninth, four points behind their hosts.

Twenty days after Watford sensationally came from 2-0 down to beat the same opponents 3-2 in extra time and reach the FA Cup final, revenge was in the Hertfordshire air.

Just as at Wembley, it was Wolves who deservedly led at the break thanks to Jimenez's well-taken goal, the Mexico striker finding himself in the right place to head home Jota's chipped ball to the far post after the home team had failed to clear a corner.

Jimenez was unlucky not to have gone in with two goals to his name at half-time, Etienne Capoue denying him a 33rd-minute opener after getting back to make an excellent last-ditch goal-line clearance following another of those now characteristic Wolves counters.

Javi Gracia's team hit back at the start of the second half, though, drawing level thanks to Cathcart's poor back pass, which went straight to the feet of all people, Gerard Deulofeu.

Watford were still missing skipper Troy Deeney due to suspension, although Jose Holebas did pass a fitness test as the hosts made three changes in defence.

The visitors, meanwhile, had no injury problems to contend with, meaning Morgan Gibbs-White and Ivan Cavaleiro both had to settle for a place on the bench.

However, despite Rui Patricio's smothering stop thwarting the Spaniard, the ball fell straight to Gray, who thumped it into the unguarded net for his ninth goal of the season.

But in a match characterised by silly errors, it was Wolves who got payback for that painful loss earlier this month when the normally reliable Foster misjudged Ruben Neves' deep cross, allowing Jota a simple volleyed finish at the far post.

5 - The most Premier League assists exclusively for one player:

Javi Gracia: "I'm disappointed and sad - we wanted to get a better result, but it was impossible.

"In all the games, whenever we have conceded goals, there have always been mistakes, but in the last few games we have been conceding avoidable goals.

"Before the game, we knew our target was to try and play in Europe - and at this moment, it is the same.

"We have two chances - if we are not able to achieve seventh position, the other way to Europe is to try and win the cup final." 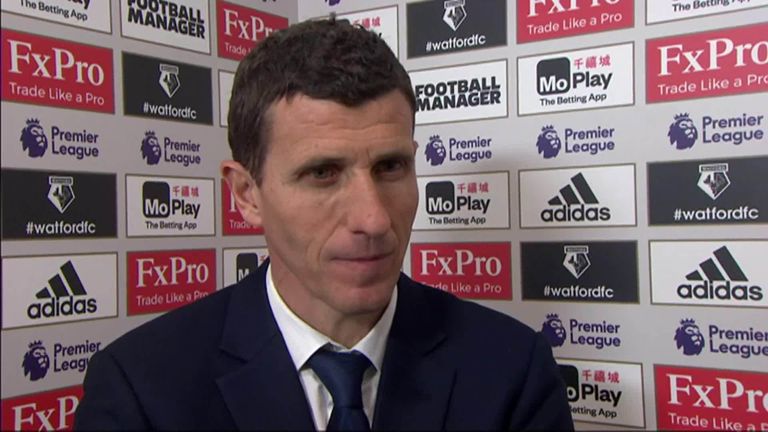 Watford's Javi Gracia bemoans the fact his side have conceded soft goals in recent games following their defeat at home to Wolves.

Nuno: "The final of the FA Cup still has to be played, so why should we be worried about anything else? It was never our aim to compete in Europe.

"Competing in the Premier League is very hard, we must know were we came from. Last season we were playing against Burton, with all my respects, and now we are here.

"We have achieved staying in the Premier League - no-one has said that - and now we are going to be in the top half. Last season we were in the Championship.

"We are not thinking about it. It (seventh) doesn't guarantee anything. We have to prepare for the final game at Molineux (against Fulham)." 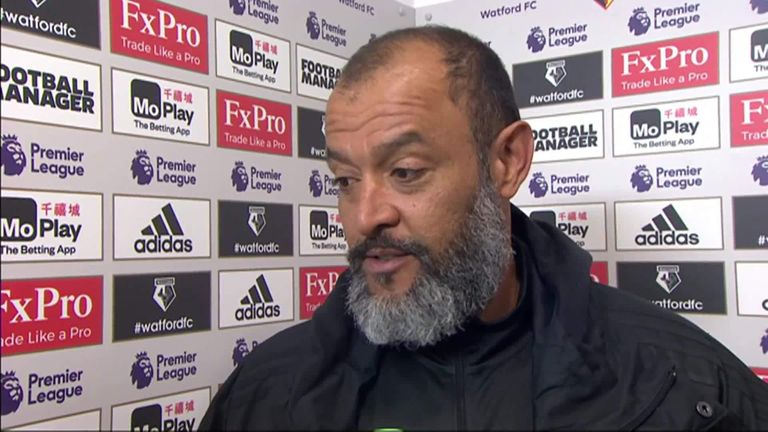 "It was very sweet and well deserved, a decent performance by Wolves," said the Sky Sports pundit. "The first goal was excellently crafted by Jota, with Jimenez doing the rest at the far post.

"They started the second half sloppily, with Bennett giving the ball away cheaply to Deulofeu, before Gray smashed it into an empty net.

"It was a decent game and Wolves started to press towards the end, and Foster made a poor error of judgement when coming for cross, which he got nowhere near, with Jota volleying home at the far post." 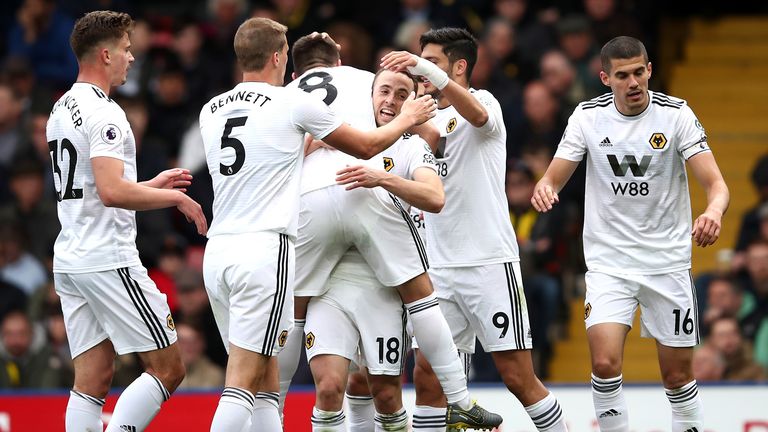 Man of the Match: Diogo Jota

Jota has enjoyed a brilliant season for the newly promoted team, and his impressive form up front continued at Vicarage Road on Saturday.

The Portuguese firstly set up Raul Jimenez's first-half opener with an inch-perfect cross to the far post which his strike partner could not miss.

And then the 22-year-old was on hand to calmly volley home Ruben Neves's centre to cap off another eye-catching attacking display for his side.

Watford take on Chelsea at Stamford Bridge on Sunday May 5 (2pm), while Wolves face already-relegated Fulham at Molineux the previous day (3pm).