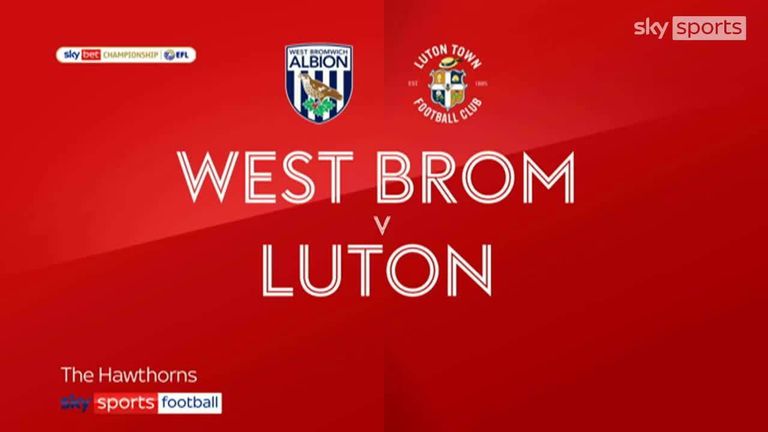 Valerien Ismael marked his first home game in charge of West Brom with a victory as Albion held on for a 3-2 win over Luton in an enthralling encounter at The Hawthorns.

A Kal Naismith own goal in the fifth minute and a Callum Robinson header in the 36th minute gave the home side a comfortable half-time lead, which they built on in the 66th minute when Karlan Grant fired home.

There was a tense finish, though, when Harry Cornick converted in the 70th minute and then, eight minutes into 16 added on - because of a serious injury to Jordan Clark following a collision with goalkeeper Sam Johnstone - Pelly-Ruddock Mpanzu did likewise, but the home side were good value for their victory.

They opened the scoring with a little help from Luton in the fifth minute. Darnell Furlong's long throw-in from the right-hand side was nodded past the helpless Simon Sluga by his team-mate, Hatters captain Naismith.

Luton struggled to apply any serious pressure on their hosts in the first period, and they duly fell further behind in the 36th minute.

An in-swinging Alex Mowatt corner kick from the right was pushed by Sluga straight to Robinson, who was waiting at the back post and simply nodded the ball in from close range - that was his second goal in as many games this season.

There was a lengthy wait, of around 10 minutes, at the start of the second half as Luton midfielder Clark received extensive medical treatment following a collision with Johnstone. The Albion 'keeper came to punch a long ball away and collided with the unfortunate Clark, who was tended to on the field for a long time.

Eventually he was carried off on a stretcher to a standing ovation, having been checked on by the anxious Johnstone and manager Nathan Jones.

Following the resumption of play, West Brom increased their lead further in the 66th minute. Robinson won the ball high and slipped Mowatt in. He in turn fed Grant, who received the ball with his back to goal; he turned and nonchalantly lifted the ball over Sluga.

The away side, fresh from seeing off newly-promoted Peterborough at Kenilworth Road in their first league game of the season, were not interested in lying down so easily - though there was an element of fortune to their goal in the 74th minute.

Conor Townsend was guilty of taking too much time to clear his lines in his own penalty area, and his attempted clearance ricocheted straight across the face of goal and into the path of Cornick, who was not going to miss from close range.

Sixteen minutes were added on to the end of the second half, as a result of Clark's injury, That lifted the visitors, who enjoyed their best spell of the match in that period.

Another case of defensive communication between Kyle Bartley and Johnstone saw the ball bounce off the head of the former and, despite the best efforts of Dara O'Shea, Mpanzu converted from close range.

West Brom's Valerien Ismael: "We were under control. We started really strong and we saw the power from the crowd, combined with our way to play. We dominated our situations on the pitch, we should have scored more goals in the first half. In the second half we came out strong and we scored the third goal, the intensity was good and then came the injury. It was another 15-minute break, it killed our legs and our rhythm.

"Then we made a mistake, after that it was another game. They then changed completely their way of playing, there was more fight, and you need to embrace the fight. We struggled with this. At the end of the day, it was important to win the game because it was difficult at the end. We learned from our guys in certain situations and we can do better. The first hour before the injury break was simply brilliant and this is what we want to see from West Brom."

Luton's Nathan Jones: "Everybody knew about Barnsley last year and the way West Brom are going to play, and fair play to them. We needed to be a little bit braver, but we didn't do the basics right. We got punished and we were chasing the game from 3-0 down.

"They should go up, they're well equipped for the Championship. They're people who work very hard to get back to the Premier League, because they've got that type of squad. They'll be hard to beat here."