Match report and free highlights as West Ham move back into Champions League places with routine 2-0 win over rock-bottom Norwich; Hammers have collected 37 points, their best ever return after 21 games in Premier League era 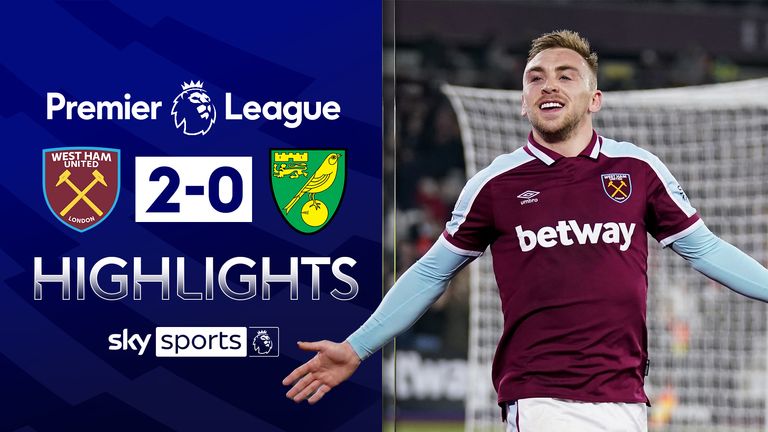 FREE TO WATCH: Highlights from West Ham's 2-0 win over Norwich in the Premier League

Jarrod Bowen scored twice as West Ham moved back into the Champions League places after sweeping aside rock-bottom Norwich 2-0 at the London Stadium in the Premier League on Wednesday.

Bowen had already had a goal disallowed when he broke the Canaries' resistance after 42 minutes when he glanced home Vladimir Coufal's cross.

The 25-year-old has been earning plenty of plaudits for his recent performances, and here he staked further claims for a future England call-up, adding a second with seven minutes remaining after meeting Arthur Masuaku's low cross and surviving a VAR call for offside.

The forward also had a first-half goal disallowed before striking the woodwork twice in the second period. Norwich's best chance fell to Adam Idah as he was denied by a combination of Lukasz Fabianski and the post, but Dean Smith's side ultimately fell to a sixth straight league defeat without scoring a solitary goal.

The result means West Ham leapfrog Arsenal into fourth spot on 37 points, while Norwich remain on 10 points from their 20 games, still three points adrift of safety.

"I felt we had a lot of ball and a lot of domination," Hammers boss David Moyes said. "We thoroughly deserved the victory but it wasn't easy. We have to try and keep it going. I don't think being fourth this moment in time means an awful lot apart from showing we have been consistent.

"As long as we are around the mix and European places, that will be really good but if we can hang on the coattails of teams above... that is what we will try and do."

Man of the match: Jarrod Bowen. 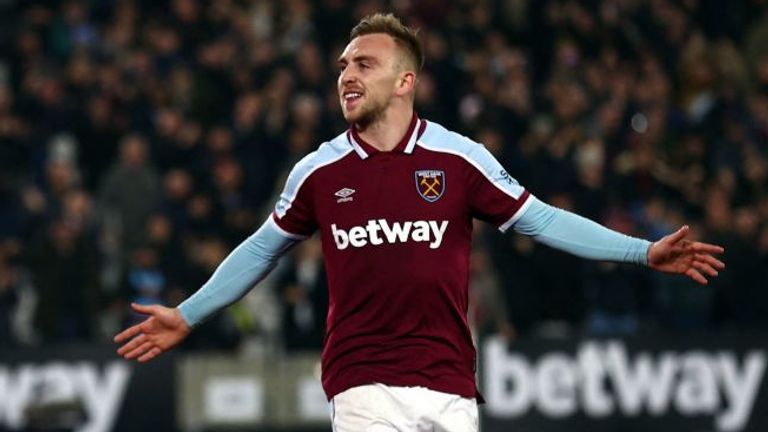 West Ham manager David Moyes thinks that forward Jarrod Bowen should be in Gareth Southgate's thoughts for the next England squad selection.

Moyes was full of praise for man-of-the-match Bowen, and he believes Gareth Southgate will be fully aware of the progress being made this term.

Asked about his England prospects, Moyes said: "When you look at the competition, (Marcus) Rashford, (Jack) Grealish, (Jadon) Sancho - they're just the ones I can think off the top of my head but that's a decision for Gareth.

"Sometimes you need someone who is slightly different. He's scoring goals at the highest level, so I don't think he'll be too far away in England's thoughts. Provided he's playing well for West Ham he'll be recognised by the media and people in this country."

Tomas Soucek was missing from the West Ham squad. But full-back Aaron Cresswell returned after six weeks out with a back injury. Nicola Vlasic and Pablo Fornals came into the side from the starting XI that won 3-2 at Crystal Palace in their last Premier League outing.

Moyes had hinted at rotating his side following the 2-0 FA Cup third-round win over Leeds, but such was the superior quality of West Ham's squad, the incentive of returning to the Champions League places inevitably proved too much for the beleaguered Canaries.

His side were somewhat slow to get going, in truth, with their best opening of the first half coming inside two minutes when the returning Manuel Lanzini found Bowen with a cute reverse pass but Tim Krul got down well to smother his snapshot.

Craig Dawson had a shot cleared off the line by Grant Hanley as Krul appealed for a foul on him by Nikola Vlasic before Bowen thought he had broke the deadlock when his teasing cross found the far corner - but referee Simon Hooper penalised Vlasic for offside as he made a move to play the ball.

Robert Snodgrass was scoring for Norwich the last time they beat West Ham eight years ago - their only win in their last 11 league meetings - but there was never any sense they would emerge with a first away triumph in east London since March 1989.

Despite containing the hosts for the best part of the opening 45 minutes, this would develop into another soporific performance; the type that will have left boss Smith wondering why he jumped at the chance of returning so soon to management following his dismissal at Aston Villa.

Norwich have failed to score in each of their last six Premier League games, now their outright longest ever consecutive run of league matches without scoring since they joined the Football League in 1920.

Smith has never beaten West Ham as a manager in six attempts; in his 552-game managerial career in all competitions, this is the most he has faced a single opponent without ever winning. 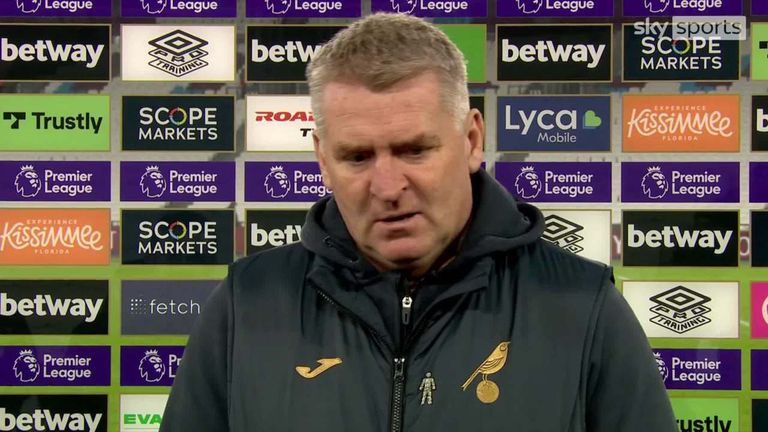 Norwich boss Dean Smith says his side were simply beaten by the better team as West Ham defeated the Canaries 2-0 at the London Stadium.

"There was enough in that performance to give us encouragement," Smith said. "It was better than our three previous displays and we were in the game for long periods. I felt it was fairly even in the first half. I was disappointed with the manner of the first goal and the timing of it can certainly take the stuffing out of you.

"I wanted the players to show more urgency in the second half but unfortunately West Ham did. The team with the better quality won the game so I can't have any complaints. We wanted to press the reset button but we have to acknowledge we got beat by a top-six team. Every game we play is massive, and despite all the criticism, we're still only three points away from a position of safety."

Their hopes for survival briefly flickered after eight points snaffled in November, but they have not collected another one since. Their last trip to the capital on their previous outing ended in a 3-0 defeat to Crystal Palace and their supporters celebrating imaginary goals.

At least they are going down with a sense of humour, but a third trip to London in a matter of days at the apex of winter following their unconvincing win at Charlton at the weekend is no laughing matter in itself. The home game with Everton on Saturday now takes on even greater importance.

Moyes vowed ahead of the game that he would seek to continue "annoying" his top-four rivals, and in extending his side's advantage over Tottenham and Manchester United while usurping the Gunners, those more established sides with regular European aspirations know West Ham's own lofty ambitions are not about to fade and die.

Moyes has guided the Hammers to their best start of any Premier League season, even now eclipsing the 35 points from their opening 21 matches last term, when their bid to snatch an unlikely top-four slot ultimately fell short.

The Scot acknowledges defensive reinforcements are needed, with Angelo Ogbonna out for the rest of the season and Kurt Zouma not yet back to full fitness - but they were not missed against the Premier League's worst team.

Przemyslaw Placheta and Milot Rashica both had tame first-half efforts that were comfortably fielded by Fabianski, and it was of little surprise when Bowen broke the deadlock three minutes before the break.

Lanzini regained possession in midfield before Declan Rice's measured pass down the left found the marauding Aaron Cresswell. The left-back's deep cross was retrieved by Coufal, who had time to pick out the clever run of Bowen in front of Gibson to flick his header into the far corner.

Attacking cover must also be a priority given his close management of Michail Antonio and the side's continued presence in both the FA Cup and Europa League, and there were chances for West Ham to secure a more convincing win in the second half. 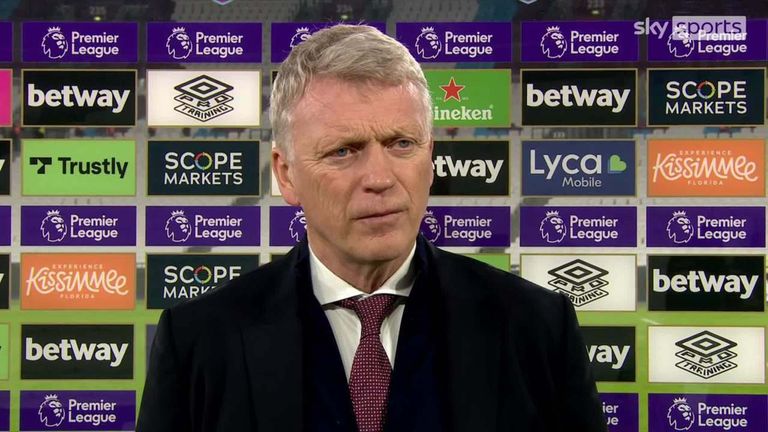 David Moyes shares his thoughts on his West Ham sides win over rock-bottom Norwich City. The Hammers won 2-0 at home to move into the top four of the Premier League table.

Bowen was found expertly by Pablo Fornals only to strike the bar with his dinked effort before thudding the outside of the post from an acute angle. Antonio rolled Hanley on another occasion but could only lift his shot over.

It meant the door was still left ajar for Norwich to snatch an unlikely point - and Idah thought he had pulled a rabbit out of the hat when he tricked his way inside Coufal to smack the post via the fingertips of Fabianski.

It was a surprise when Smith subsequently removed the dangerous Idah, and West Ham would put the game to bed as VAR this time favoured Bowen as he met Masuaku's cutback to poke his shot beyond Krul. Referee Hooper initially signalled for offside, but replays showed Max Aarons' trailing boot had played the forward on.

This was as routine as it could possibly get for West Ham, and far greater challenges lie ahead.

Man of the match - Jarrod Bowen

Bowen has been directly involved in 16 goals in all competitions this season (8 goals, 8 assists), the most of any English player for Premier League clubs in 2021-22.

The former Hull forward scored his 13th and 14th Premier League goals for West Ham, while his opener was the first of those to be headed. Indeed, all six of the Hammers' headed goals in the competition this season have been scored by different players (Benrahma, Ogbonna, Zouma, Soucek, Antonio, Bowen).

Bowen said: "It was a good performance. Norwich are fighting for points. We had to put the barricades up a little bit but with our attacking threat we've always got a goal in us.

"It would have been nice to get a hat-trick but to get two goals, three points and a clean sheet is good enough.

"We hit a bit of a rough patch and we were disappointed with our performances but that shows the standards we have set ourselves. We look like we're over that and we've got that winning feeling which is nice. We'll just keep going about our business."

Tottenham are sixth on 33 points from 18 matches but while they have three games in hand, West Ham have the points on the board. Manchester City could well be running away with the league, but the race for top four is developing into a fascinating watch.

"You'd take three Premier League wins in a row as that's not easy to do," Moyes said. "I never felt we were slipping away but the competition for the top eight in the league is really difficult.

"When you think of Wolves, Arsenal, Tottenham and Manchester United. If we're going to stay there, we're going to have to win games and score goals. I'm really pleased with how the players are doing, given the Covid situation as well. They're doing great.

"We're more experienced [than last season] and we have a great hunger. It was only around January-February time last year when we started believing, but we went into this season feeling we had a good chance.

"We've had a few blips and injuries that haven't helped us but we're hoping to have Kurt [Zouma] back shortly and we've now got Aaron [Cresswell] back which is great news."

West Ham host Leeds, live on Sky Sports Premier League and Main Event on Super Sunday; coverage starts at 1pm with kick-off at 2pm. Norwich are at Carrow Road taking on Everton at 3pm on Saturday.