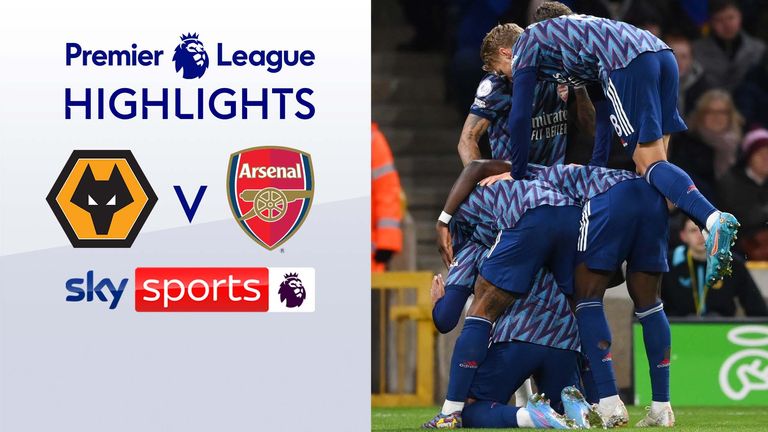 FREE TO WATCH: Highlights of Arsenal's win against Wolves in the Premier League

Ten-man Arsenal held on for a vital 1-0 win at Wolves that takes them fifth thanks to Gabriel’s first-half goal.

Gabriel Martinelli's red card midway through the second half sparked heavy pressure from the home side but Mikel Arteta's team held on for the three points.

The goal itself was a scrappy one as Gabriel nudged it over the line from close range after Alexandre Lacazette tangled with Wolves goalkeeper Jose Sa.

Bruno Lage's side struggle to create but were given fresh hope when Martinelli was sent off in strange circumstances - booked twice in the same passage of play.

Wolves thought they had the equaliser immediately when Granit Xhaka put the ball through his own net but Raul Jimenez had interfered with play from an offside position.

Scoring goals has been a problem for Wolves all season and could well see them drift out of this race for the European places - a race Arsenal now look well placed to win.

West Ham remain the team to catch but the Gunners are now just one point behind their London rivals with two games in hand.

Joao Moutinho's injury forced a change of shape with Francisco Trincao returning to the forward line as Wolves went with a 3-4-3. The other two changes were like-for-like swaps as Romain Saiss and Fernando Marcal came in for Toti Gomes and Rayan Ait-Nouri.

Mikel Arteta made three changes to the team that drew at home to Burnley. Cedric Soares came in for Rob Holding, while Granit Xhaka and Thomas Partey returned in midfield. Emile Smith Rowe and Albert Lokonga, along with Holding, drop to the bench.

Gunners rock solid at the back

Defensively, Arsenal withstood everything that Wolves threw at them.

It is five clean sheets in seven Premier League matches for Arteta and his players, and with Ben White restored alongside Gabriel that partnership looks particularly strong.

They headed away cross after cross in the second half with man-of-the-match Gabriel not afraid to indulge in the dark arts either - time-wasting when it was required to get his team over the line.

Arsenal fans will welcome that bit of nous. It might just take them back to the Champions League.

Wolves have problems in front of goal

Only Norwich and Burnley have scored fewer goals than Wolves this season and even those two have caught them up this week. It is holding them back.

Lage tried to force things, taking off Conor Coady for Fabio Silva late on. Wolves had all the territory in the final quarter of the game once Arsenal were down to 10 men.

But they could not find the breakthrough despite putting in 35 crosses from open play. It was not even that the quality was lacking, the issue is that they cannot put it away.

Ruben Neves whipped in one inviting ball that would have required only the slightest of touches. Daniel Podence was putting the ball in with pace too. It was not enough.

Leander Dendoncker is accomplished at getting his head to the ball but lacks the technique to get enough power on it. Jimenez has not scored a header since his return. It cost them here.

Arteta: We 'suffered' for that win

Arsenal manager Mikel Arteta was proud of Thursday's performance, especially after the sending off, but has warned his team that they must stop going a man down if they want to finish in the top four. 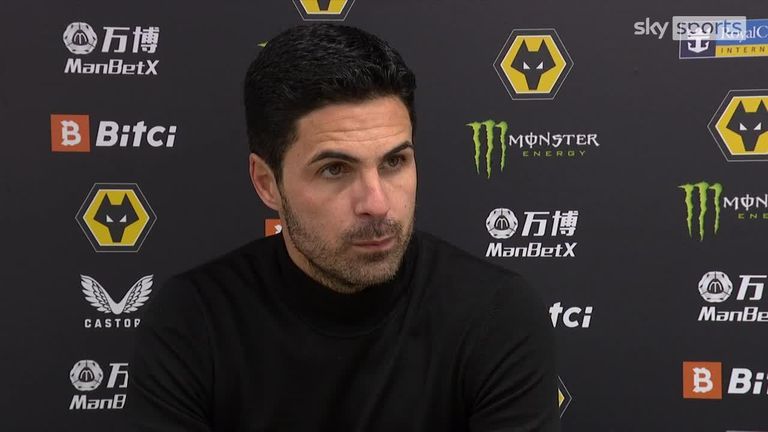 Following Arsenal's 1-0 victory over Wolves, Mikel Arteta has highlighted the commitment of his players to their team.

He told BT Sport: "It is tough enough to play against Wolves here away from home, and we made it even tougher playing again with 10 men. The result is really positive, we needed to win, but we suffered in the final 20 minutes.

"The character, how we dig in, the spirit that we showed, how they defended so many difficult situations for such a long time, I am really proud of the boys. When I talk about the unity and the togetherness in the group, this is when it comes and they showed it on the pitch.

"We need to play with 11 players in the final 16 games - that is going to be key to give us the best possible chance for us to win football matches. To win games in the Premier League is hard enough, with 10 men it is very unlikely."

Lage: We were the better team 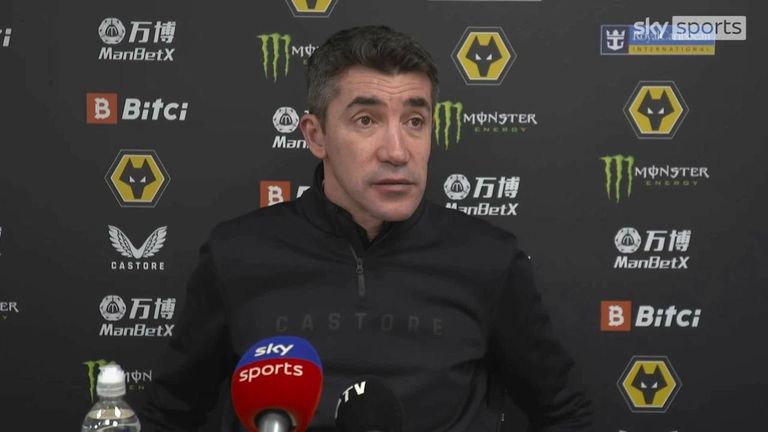 Wolves head coach Bruno Lage talks after his side's FA Cup defeat to Norwich and says he was disappointed they didn't play with the same dynamic as in recent weeks.

Wolves boss Bruno Lage was unhappy with the decisions to allow Arsenal's opener and disallow a potential Wolves equaliser after Raul Jimenez was judged to have interfered with play from an offside position when Granit Xhaka put through his own net.

"I think we were the better team, the tempo we put in the game was very good," Lage told BT Sport.

"At the end we didn't score, but I think we scored [the disallowed goal].

"I think it was two strange decisions, both goals. It does not justify everything, because I think we created a lot of chances to score.

"But the situations it was very strange, especially our goal. We must move one and keep working as we are working."

Tottenham host Wolves on Sunday at 2pm while Arsenal are next in action on Saturday February 19 at home to Brentford; kick-off 3pm.