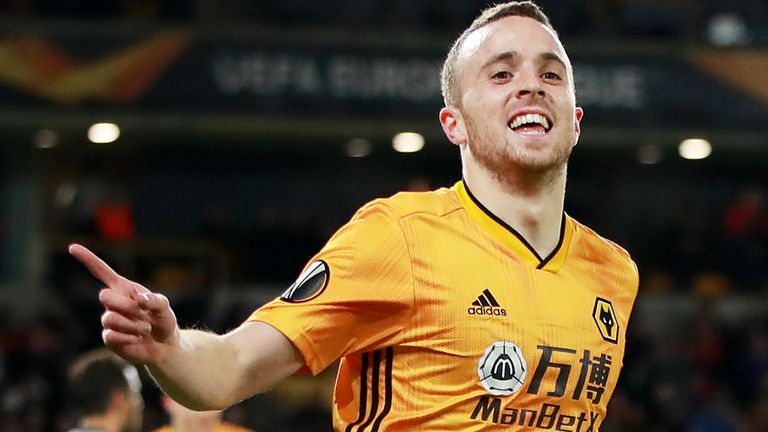 Diogo Jota changed the game for Wolves as he scored an 11-minute hat-trick in the 4-0 Europa League win over Besiktas, says head coach Nuno Espirito Santo

Diogo Jota came off the bench to score a hat-trick as Wolves beat Besiktas 4-0 at Molineux to go into the Europa League knockout stages in style.

Wolves had been struggling to find a way through the Turkish team but Jota's introduction just before the hour mark turned the game as he scored three goals within 11 minutes.

Leander Dendoncker was also on target but Braga's 4-2 victory away to Slovan Bratislava meant Wolves had to settle for second spot in Group K, one point below the Portuguese.

Despite a healthy crowd of 27,866, it had looked to be a low-key contest for much of the evening with Wolves' progress already assured and Nuno Espirito Santo having made seven changes to his team.

Man of the Match: Diogo Jota

How Jota changed the game

Jota's arrival changed that as Wolves withdrew Ruben Neves and switched to a 3-4-3 formation.

Patrick Cutrone produced a clever flick to put Pedro Neto away down the right and his cross found the head of Jota who scored with his first touch.

Besiktas' resistance was broken. Dendoncker's first-time shot from Joao Moutinho's corner struck the post from close range soon after but Wolves did not have to wait long.

The Belgian midfielder hit the frame of the goal again moments later with better results when his fierce long-range effort was pushed onto the post by Utku Yuvakuran only for Jota to react first and put home the rebound.

At the third time of asking, Dendoncker finally did have his goal - a straightforward header from another Moutinho corner as Wolves continued to overwhelm the visitors.

One minute later it was four goals in 11 minutes when young wing-back Oskar Buur won possession near the touchline and crossed for Jota to complete his hat-trick.

Wolves made seven changes from the team that drew at Brighton on Sunday with Conor Coady, Joao Moutinho, Ruben Neves and Leander Dendoncker retaining their places.

John Ruddy, Ryan Bennett, Ruben Vinagre and Max Kilman came in, while there was an opportunity for summer signings Patrick Cutrone and Pedro Neto in attack.

Oskar Buur was the surprise name. The Danish wing-back last featured for the senior side in April 2018 – scoring a late equaliser in a 2-2 draw at home to Hull in the Championship.

There were more than 20 minutes remaining at that point and there was still time for debutant Owen Otasowie to head against the top of the bar in search of a fifth.

Wolves were forced to settle for four goals and second spot in the group following Braga's come-from-behind win over Slovan Bratislava.

But with Nuno's side having lost only once in 18 games now - and that having been a weakened side in the Carabao Cup at Aston Villa - Wolves won't fear anyone in the last 32. "I am happy with the whole performance," said Nuno afterwards. "We scored goals, we defended well, we were organised. I think it was a good game.

"Of course, when you make [a substitution] you try to change something and find a solution for the team. Sometimes it works out, sometimes it does not.

"It has been a tough competition. The first game we didn't do too good but I think progressively throughout the competition we have done better.

"Let's see the draw on Monday, know the opponent and then think about it. This is our process."

"This is what we want," said Nuno of Jota's extraordinary impact. "Diogo did fantastically well." It was still an understated assessment of one of the fastest hat-tricks ever scored in this competition. What an impact he made.

None of Jota's goals were from distance but his trio of poacher's finishes will encourage everyone at Molineux that the forward is back to his best form having also netted twice against Brighton on Sunday.

His tally of five goals in two games is more than he had managed in his previous 24 for club and country this season. It is a huge boost to Nuno who could have been forgiven for wondering whether the player could thrive in his 3-4-3 formation.

After all, it was only after Jota was moved more centrally to partner Raul Jimenez that he enjoyed his purple patch last term. While the switch back to 3-4-3 has suited some, including Neves, Jota was seen as a potential victim of the change.

But he is a confidence player above all else and with Wolves going into a daunting run of games over the festive period, having Jota in this kind of form could be huge.

Wolves supporters will have one eye on the Europa League on Monday as they wait to discover where this European adventure will take their team next but before all that there is the small matter of Premier League action at the weekend.

Nuno's team host Jose Mourinho's Tottenham at Molineux on Sunday with plenty at stake. With Spurs are currently one point adrift of Wolves, victory for the home side will guarantee that they retain their place in the top six.