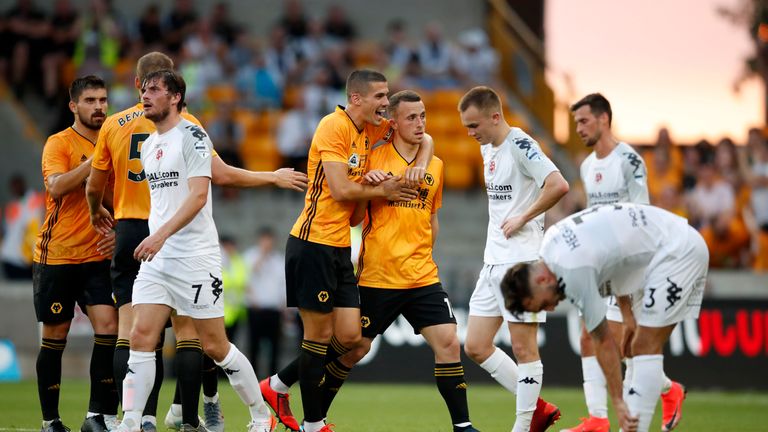 Highlights of Wolves' 2-0 win over Crusaders at Molineux

Diogo Jota and Ruben Vinagre struck in either half as Wolves won in Europe for the first time in 39 years with a 2-0 victory over Crusaders at Molineux on Thursday.

Portugal international Jota scored Wolves' first goal in Europe since 1980 with a crisp volley on 37 minutes, before substitute Ruben Vinagre capitalised on a stoppage-time goalkeeping error to double their first-leg advantage in the Europa League second qualifying round tie.

Vinagre's strike was a bitter pill for Crusaders to swallow after a valiant defensive display looked to have restricted the dominant hosts to just a single goal on their long-awaited return to Europe.

But Wolves' late second leaves them in the driving seat ahead of the return leg at Seaview in Belfast next Thursday.

Man of the Match: Diogo Jota.

How Wolves made winning European return

With Wolves last scoring in Europe 39 years ago, a near sell-out crowd arrived at Molineux expecting a hatful against their part-time opponents, but they were made to wait by a dogged Crusaders outfit. In fact, the visitors nearly took a shock lead, with Rory Hale's rasping drive flashing wide inside seven minutes, but from there on it was one-way traffic for the hosts.

But the Crusaders captain's defences were breached eight minutes before the interval as Jota peeled away to the penalty spot to meet Adama Traore's cross and rifled an unstoppable volley home.

Jota should have doubled his and Wolves' tally four minutes later, but O'Neill raced off his line to ensure Crusaders made it to the break with just a one-goal deficit.

The Wolves barrage continued in the second half, but Crusaders stood firm, restricting their hosts to half chances with a resilient display which moved them to within seconds of a result that would have left the tie open ahead of the return leg in Belfast.

But in the third minute of stoppage time, O'Neill undid all of his hard work when he hesitated when clearing a cross from the right, collided with a team-mate and presented Vinagre with the simple task of stroking Wolves' second into the unguarded net.

Wolves manager Nuno Espirito Santo: "We are doing things we want to do but it was tough, Crusaders were well organised, really deep with no spaces. But we need to be faster, more accurate, sharper - all things that will come with hard work."

Wolves travel to Belfast for the return leg at Seaview on Thursday (7.45pm), before kicking off their Premier League campaign away at Leicester on August 11 (2pm)