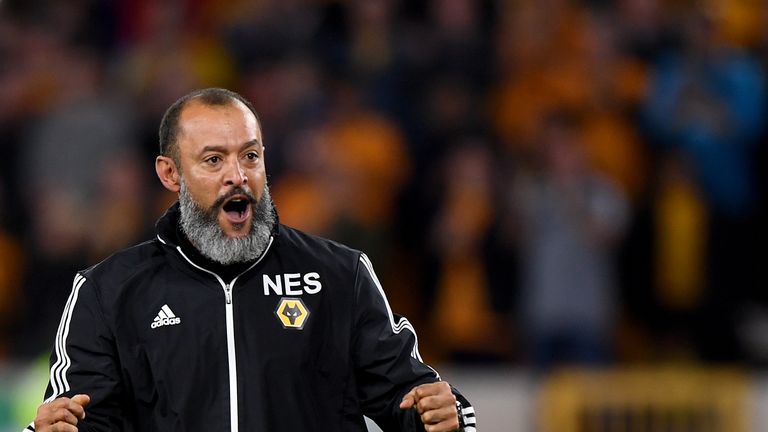 Raul Jimenez and Leander Dendoncker fired Wolves into the Europa League group stage after a 2-1 win over Torino.

Striker Jimenez struck his sixth goal in six European games to help send the hosts through 5-3 on aggregate in their play-off.

Andrea Belotti briefly levelled in the second half before Dendocker struck to cap victory at Molineux.

Nuno Espirito Santo's side now wait for Friday's main draw in Monaco after battling through the qualifying rounds to extend their first European campaign since 1980.

Torino rarely looked like turning around a 3-2 first-leg deficit despite plenty of possession. They tried to force the early running and Daniele Baselli volleyed well wide from the edge of the box.

Diogo Jota came in for heavy treatment from the Italians, who were snappy without following any of their early intent through.

The Serie A side were restricted to long-range efforts and, when a well-worked free-kick was only half cleared, Tomas Rincon thundered a volley wide.

Molineux was nervous and Wolves' sloppy distribution failed to ease the tension as Torino dominated the ball.

The hosts did, at least, create the first serious chance after 25 minutes only for Adama Traore to waste the opening.

The winger's 50-yard run sent him powering into the area but, with just Salvatore Sirigu to beat, he fired at the goalkeeper from an angle.

It woke Wolves up, but it was still a surprise when they look the lead after half an hour. Traore was granted space on the right and, when he delivered a low cross, Jimenez got across Temitayo Aina to poke in at the near post.

It was his seventh goal of the season, with the £32m striker justifying his summer price tag.

Needing three goals to win Torino's hopes were fading but Patricio had to be alert to turn Baselli's angled free-kick behind five minutes after the break.

Yet the goalkeeper was beaten in the 58th minute when Belotti glanced in Baselli's whipped delivery from six yards. Wolves hit back, though, to restore their advantage just 103 seconds later.

Jota scampered into the area and, when Sirigu saved his shot, Dendoncker fired in off a post from 16 yards.

It wrapped up the tie but Dendoncker should have grabbed a second with five minutes left only to shoot too close to Sirigu.

Soualiho Meite could have then levelled on the night soon after but shot wide with just Patricio to beat.