Aston Villa 2-0 Newcastle: Dean Smith's side up to eighth as pressure increases on Steve Bruce

Report and highlights as Aston Villa ease past Newcastle; goals from Ollie Watkins and Bertrand Traore seal all three points; Villa up to eighth, five points behind fourth-placed Liverpool with two games in hand; Newcastle now without a win in 10 games as pressure increases on Steve Bruce 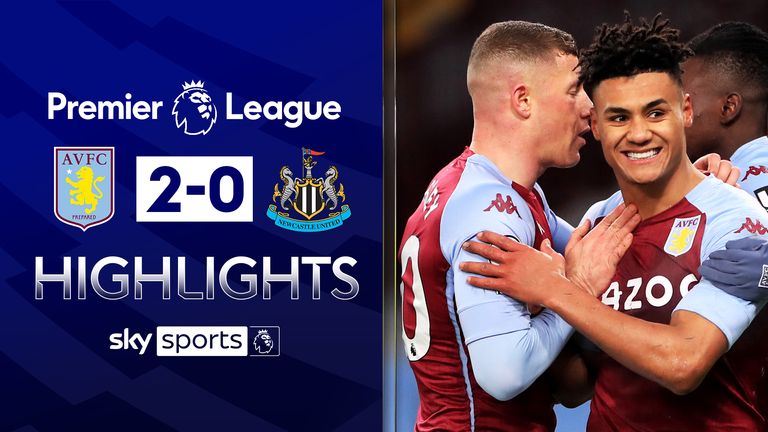 FREE TO WATCH: Highlights from Aston Villa against Newcastle in the Premier League

Aston Villa moved back into the top half of the Premier League thanks to a comfortable 2-0 victory over a lacklustre Newcastle at Villa Park.

Dean Smith, who was serving a one-game touchline ban for clashing with the officials during his side's defeat at Manchester City on Wednesday, would have been delighted with what he saw from the stands as his side eased into a two-goal lead in the first half.

Ollie Watkins (13) ended a run of nine games without a goal to head past Karl Darlow before Bertrand Traore's superb finish extended the hosts advantage (42).

The visitors did welcome back Allan Saint-Maximin in the second half after more than two months on the sidelines with coronavirus, but a fightback never materialised as Villa eased to all three points.

Villa are now up to eighth and find themselves five points behind fourth-placed Liverpool with two games still in hand.

Meanwhile, defeat ramps up the pressure on Newcastle boss Steve Bruce, whose side are seven points above the relegation places and without a win in 10 games in all competitions.

How Villa got back to winning ways...

There were warning signs early on for Newcastle as Darlow kept out Matt Targett's powerful long-range effort from the edge of the penalty area before a cross from the left-back was just out of the reach of Watkins at the near post.

However, it was another Targett cross that set up the opener. Fabian Schar could only slice an attempted clearance as the ball looped up in the air and Watkins reacted quickest, getting there ahead of Darlow to bravely head home.

Man of the match: Ollie Watkins.

Newcastle weren't having much joy, but Tyrone Mings did have to be in the right place to block Jamaal Lascelles' goalbound header before getting his body in the way of an Andy Carroll header.

However, Villa soon got back to dominating proceedings as Watkins saw a smart finish correctly ruled out for offside.

The hosts then doubled their lead just before half-time. Traore started and finished the move, picking out Jack Grealish down the left side before continuing his run into the box to latch onto an inch-perfect cutback and steering the ball in off the underside of the crossbar.

There was another big let-off for Newcastle at the start of the second half. Darlow's block denied Watkins, but Jamal Lewis handed the ball straight back to Douglas Luiz, who could only strike wide with the goal at his mercy.

Bruce threw on Saint-Maximin and Ryan Fraser as they searched for a way back into the match, but they failed to lay a glove on Villa, who almost extended their advantage through Ross Barkley's improvised flick.

Grealish then curled a shot wide as a third goal proved elusive, but Villa comfortably saw out the match to get back to winning ways.

Carra: 'Newcastle becoming a nothing club'

Jamie Carragher fears for Newcastle's long-term future under the ownership of Mike Ashley and feels Steve Bruce's side are drifting into another relegation fight following their latest poor performance.

"I mentioned how impressed I have been with Aston Villa, not just tonight but all season," said the Sky Sports pundit.

"It's the complete opposite with Newcastle. It just feels like a club that's nothing at this moment, just sleep-walking into another relegation dog fight.

"Twice they have gone down under Mike Ashley. At this moment they have a bit of a gap between them and Fulham. There is still a long way to go but I would say Fulham and West Brom are in much better form than Newcastle. 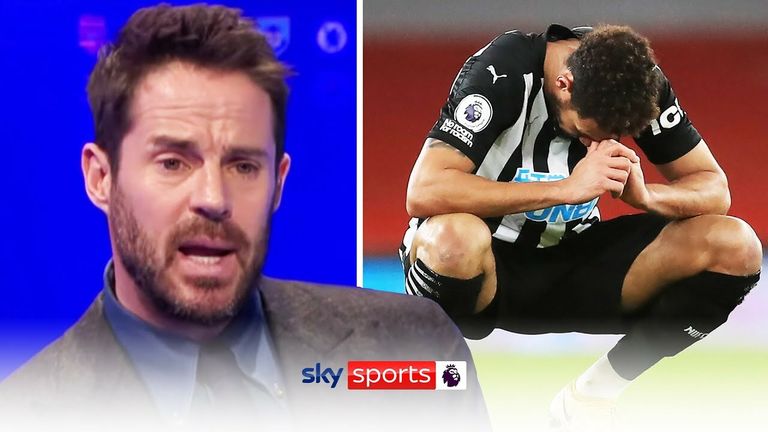 Jamie Redknapp believes Newcastle's problems lie deeper than the manager and insists that replacing Steve Bruce, even with Rafa Benitez, will not fix anything as their squad is 'not good enough'.

"A team who are just drifting, doing nothing, becoming a nothing club and that's what Newcastle have never been. There's always been some sort of spark, some sort of interest, some sort of enthusiasm when you watch them play.

Aston Villa boss Dean Smith: "I thought we were good especially in the first half. We overplayed a little in the second half and could have scored a couple more. I'm really pleased for Ollie Watkins; it always weighs on a forward's mind and it was nice to get an early goal for himself.

Really pleased, solid performance at 2-0 and another clean sheet at home.

"We have had three tough away games and we only got one point, there were some debatable decisions in the Manchester games but today we did well." 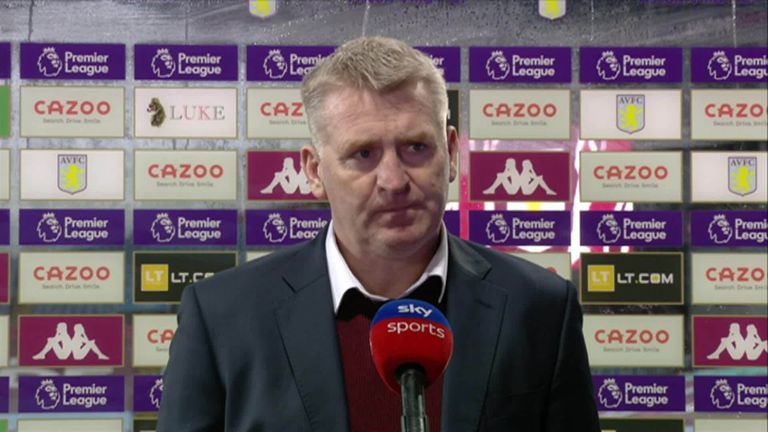 Aston Villa manager Dean Smith reacts to his side's 2-0 win over Newcastle in the Premier League.

Newcastle boss Steve Bruce: "Unfortunately we've gifted them a goal and after that it was difficult. There were large parts of it I was pleased about. Certainly, the addition of Allan Saint-Maximin and Ryan Fraser. I have seen enough to be encouraged. Yes, we have to accept defeat but there was enough there to work on.

"That is always the difficult part of the Premier League and we understand that, we have found it difficult to score a goal, but I was encouraged, especially when those two got on the pitch. I have seen enough in the squad, having them two back and then a couple more. we are not as injury ravaged. The big players in the team who can score and create a goal for us are getting back.

"We are not alone, there are other teams in difficult runs, it is how we handle it. Keep working hard and that is the only way you will change it." 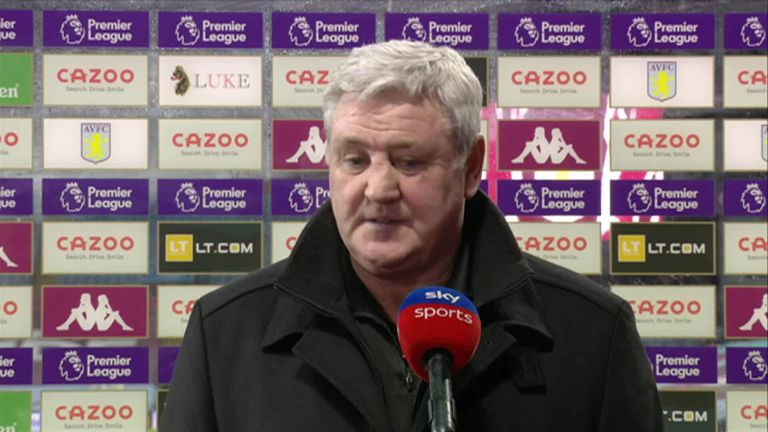 Steve Bruce says he was encouraged by aspects of Newcastle's performance against Aston Villa despite their 2-0 loss in the Premier League.

Sky Sports' Jamie Redknapp: "You see some strikers when they're not scoring, the confidence drains out of them. You didn't know watching him today that he hadn't scored for so long. Sometimes there are players staring right at you in the lower leagues that are good enough for that chance. He's excellent."

Darren Bent: "He works really hard and carries a goal threat. If you look at Callum Wilson he never looked like getting a goal today. But Watkins never stopped working. I thought his performance was very, very good."

Watkins: It's been a long time coming 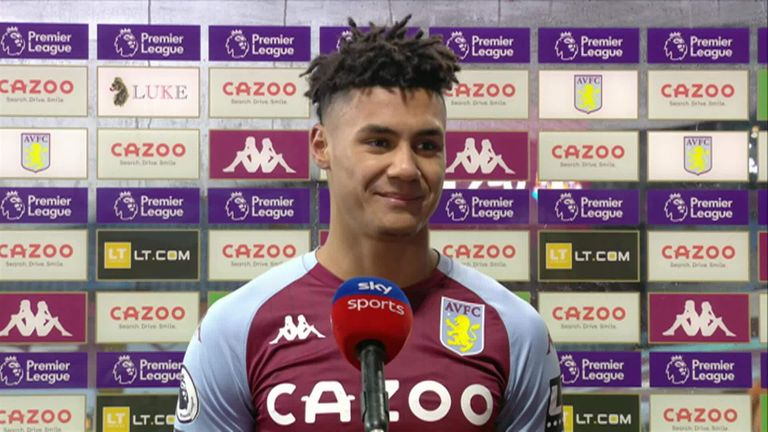 Ollie Watkins reacts to scoring in the Premier League for the first time in 10 games as he helped Aston Villa beat Newcastle 2-0.

"I feel like it has been a long time coming. I have been getting into the right areas, it has been frustrating. As a striker you always want to score goals. I have been unlucky and thankfully it went in today. I kept my eye on the ball and the next thing I knew it was in the back of the net.

"We have been unlucky, played against a few good sides but we are back to winning ways. Second half we were sloppy and if we concentrated a little bit more, we could have punished them for three or four.

"The goals will always come if I keep going in the box, it came off a defender's shin tonight and fell for me."

Next up for Aston Villa is a trip to Turf Moor on Wednesday to face Burnley; kick-off 6pm.

Meanwhile. Newcastle are back in action on Tuesday when they host Leeds at St James' Park; kick-off 6pm.