Aston Villa 0-2 Tottenham: Spurs up to sixth as they put bad week behind them 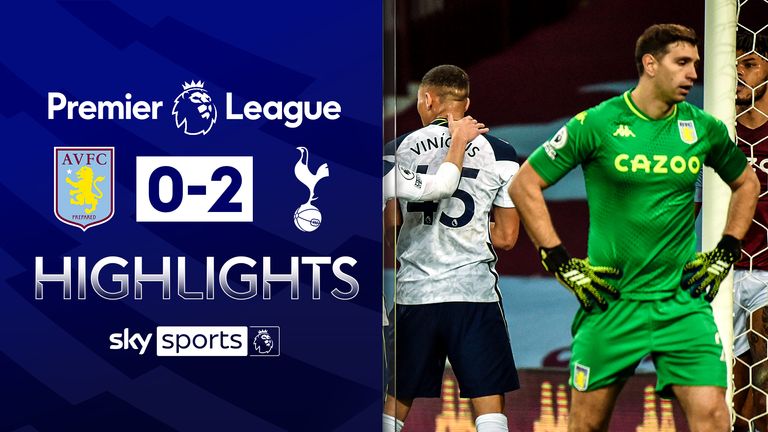 FREE TO WATCH: Highlights from Tottenham's win over Aston Villa in the Premier League

Tottenham put a difficult week behind them as they breathed new life into their bid to secure European football next season with a 2-0 victory at Aston Villa on Super Sunday.

Jose Mourinho's side, who were under pressure after defeat to north London rivals Arsenal last weekend and a Europa League exit at the hands of Dinamo Zagreb in midweek, took the lead midway through the first half thanks to Carlos Vinicius' first Premier League goal.

Harry Kane, who partnered Vinicius in attack, put the smiles firmly back on Spurs' faces, scoring from the penalty spot to seal an important three points after winning the penalty following a coming together with Matty Cash.

Victory sees Spurs, who ease the pressure off Mourinho, move above Everton and Liverpool into sixth, one point behind West Ham in fifth, and three behind fourth-placed Chelsea.

Meanwhile, Villa, who were without the injured Jack Grealish again, stay 10th with defeat denting their own European hopes.

"Harry Kane doesn't play the ball, he runs over the ball. No one likes a wily striker more than Jose Mourinho and he was there Kane.

"Cash has gone in there to block the cross that Kane is going to put across. Kane jumps over the ball and jumps into the challenge of Cash, it's as simple as that."

How Spurs got back to winning ways...

Mourinho made a statement with his team selection, responding to two disappointing results by making numerous changes and also including 16-year-olds Dane Scarlett and Alfie Devine on the bench.

In the early stages, Villa looked threatening, but they failed to create any real clear-cut openings as Hugo Lloris remained untested.

Spurs then pounced as Vinicius chased down a long ball, prompting goalkeeper Emiliano Martinez into a poor clearance that fell straight to Lucas Moura. The Brazilian played a swift one-two with Kane and then rolled the ball across the face of goal to give Vinicius the easiest of tap-ins and his first league goal in just his second start.

Mourinho's men, seemingly learning from the mistakes of the previous week, came out in the second half trying to find another goal.

Kane saw a deflected effort from the edge of the area flash just wide while Moura's pull back looked like it would pick out Kane, but Tyrone Mings just about intervened.

Villa once again struggled to create in the absence of Grealish and had to wait until just before the hour before they had a shot on target as Joe Rodon made an important clearance from Trezeguet's effort.

However, they failed to build on that as midway through the second half Spurs doubled their lead.

Kane drew a foul from Cash right on the byline and he clinically converted, sending Martinez the wrong way for his 17th goal of the season.

Spurs threatened to add a third as Pierre-Emile Hojbjerg forced Martinez into action, but in the end, they didn't need it as they ended a tough week on a high.

Neville: Jose will be nibbling again

"Spurs are a point off West Ham in fifth, three points behind Chelsea, who are in the final Champions League place.

"Jose Mourinho will be nibbling again. It will be a comfortable international break for him now.

"It's there for them. They have got the ability to do it, they are just inconsistent." 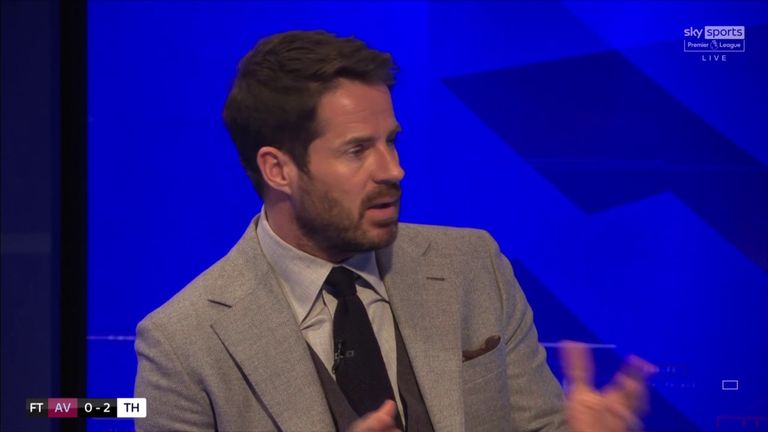 Merson: Spurs have every chance of top-four finish

"I've been a manager in the lower leagues but it's still the same, if you have a couple of bad defeats you are just sweating that you are going to win the next game, and they did that at Aston Villa.

"The last couple of games haven't been good enough.

"But that was a typical Jose Mourinho performance. Solid at the back, not very entertaining but a very good win, and they needed it.

"I look at their fixtures and I think they are a team with every chance of getting into the top four."

Aston Villa boss Dean Smith: "Mistakes [cost us]. I thought we started well and were the better team in the first 30 minutes. We made a mistake and they scored. We got into good areas in the first half. We made a stupid mistake for the penalty.

"Defensively we were solid all game. I thought Matt Targett was fouled, he needs to learn to go down maybe. They went on to score the second.

"We can't [just] wait for Jack (Grealish) to come back. The players there, it's their opportunity. Not too many have taken it.

"We've had a good season so far but we're in a bit of a blip. We won't get too downhearted. We'll reflect and work hard. We have a top player coming back for the next game." 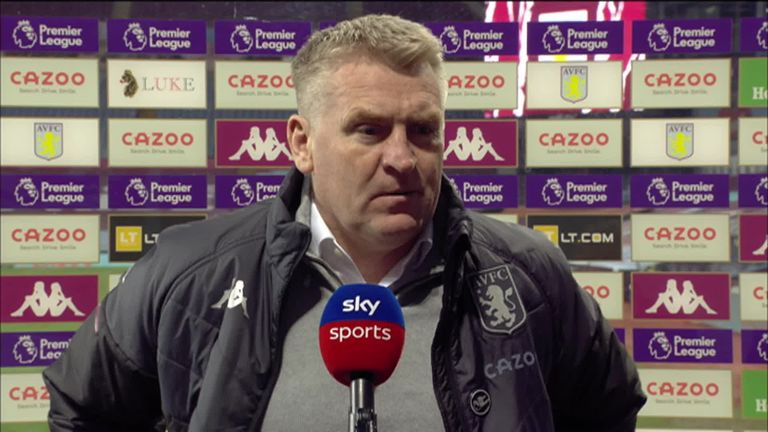 Spurs boss Jose Mourinho: "We had the attitude. Of course, we changed little tactical details but this was not about tactics, this was about attitude. So, total credit to the players. The players gave it everything.

"Everyone was at the limit. We saw cramps, we saw fatigue. We saw the things that are connected with a performance where you give everything. Tonight was one of these matches where we had to give everything.

"But my next challenge as their coach is for them to have this attitude every match and not just as a reaction to a bad result." 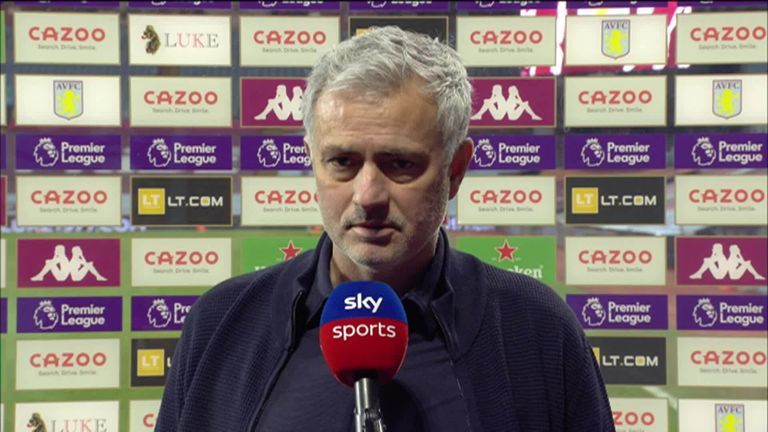 Sky Sports' Gary Neville: "It could be Harry Kane, it could be Pierre-Emile Hojbjerg, but I'm going with Lucas Moura.

"I just think the setting up of the first goal and his general all-round performance has been really good."

'We had to bounce back'

"The last couple of games have not been good enough in all areas. We knew we had to bounce back, especially before the international break. We didn't want to go away with three losses, or two losses and a draw, but the boys put in a great shift and we deserved it.

"Our attitude, in the last couple of games that had dropped below our standards, but we are working hard together, all in the same direction.

"We'd lost a bit of that, but it was nice to get it back today and you saw everyone fighting and putting their bodies on the line and that's what we need if we're going to make a push for the top four.

"Whenever you go through a difficult period, which for us was a London derby and then going out of the Europa League in that fashion, it was embarrassing for us as players, so the only way we can give back to the fans and to the club is to get out on the pitch and show what we're made of and we did that today."