Match report and highlights as Ryan Hedges fired home for Aberdeen midway through the first half; Jackson Longridge sent off for Livingston after a second booking; David Bates seals all three points for the hosts after turning home Jonny Hayes' free kick 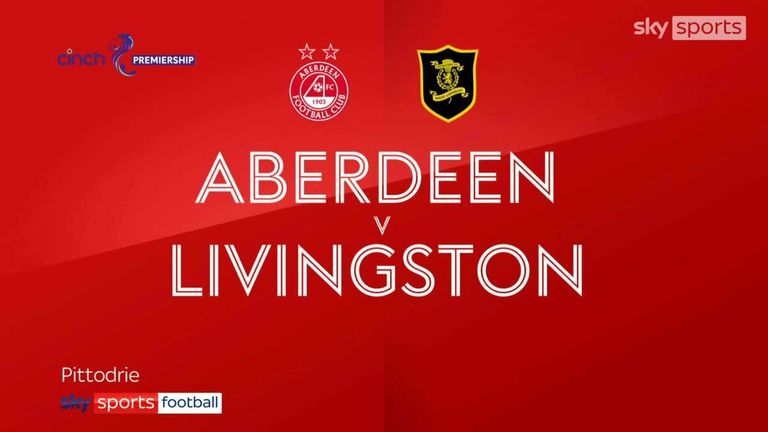 Highlights of the SPFL match between Aberdeen and Livingston

Ryan Hedges and David Bates netted their first cinch Scottish Premiership goals of the season to ease the pressure on Aberdeen manager Stephen Glass as the Dons overcame 10-man Livingston 2-0.

Hedges drilled home a low effort midway through the first half and was on the receiving end of the challenge that saw Jackson Longridge sent off for a second booking after 61 minutes.

That left the visitors facing a challenging final half-hour and Bates sealed the points as he turned home a Jonny Hayes free-kick at the far post to seal the points for the home side.

Both sides were looking to bounce back from defeats against the Old Firm at the weekend, Aberdeen having lost 2-1 at Celtic, while Livingston succumbed to a 3-1 defeat at home to Rangers.

An away win would have seen Livingston climb above Aberdeen in the standings but the victory saw the home side stay in touch with the battle to reach the top six, while Livi dropped to second-bottom as a result.

The home win was a fair reflection of a match that saw the Dons largely dominate at a cold and occasionally snowy Pittodrie.

Scott Brown was first to threaten with a 20-yard shot he fired high and wide after a superb move that dragged Livingston from right to left and back again.

The home side had a penalty claim turned away after 17 minutes as a swift counter saw Hedges' attempted cross seem to hit an arm as Nicky Devlin and Stephane Omeonga slid in to block, but referee Craig Napier was satisfied there was no foul.

The pressure was building, though, and Aberdeen got their reward after 23 minutes as another neat move saw Jay Emmanuel-Thomas slip a neat pass to Christian Ramirez.

He moved the ball onto Hedges and the winger deceived goalkeeper Max Stryjek by drilling the home with a low finish at the near post.

A similarly-flowing move should have seen Hedges double his tally but this time Stryjek read his intentions and was able to save with an outstretched leg.

Longridge picked up his first booking just 90 seconds into the second half for a foul on Funso Ojo and his late challenge on Hedges saw him depart the just after the hour mark.

Emmanuel-Thomas had seen another penalty claim turned down just two minutes before the red card, with Odin Bailey seeming to have handled his shot, but again the referee was unmoved.

It mattered little, though, as Bates turned the ball home from close range at the far post from Hayes' left-wing free-kick with 15 minutes remaining to seal the points, despite Livingston's stern second-half resistance.

Aberdeen manager Stephen Glass: "I think it was as comfortable as you can be against Livingston. First half we were excellent but when you go in only a goal up, it's always dangerous. The way we started the second half wasn't great and I think we invited them onto us at times.

"After the red card it felt comfortable but you're always on edge when they have the opportunity to put the ball into the box.

"The players know the pressure of playing for this club. We were looking for six points from tonight and the game against St Mirren on Sunday and we've got the first three.

"It's the best start possible. We have a group of hungry boys and they put demands on themselves. It's important we build on it and that's the overriding thing for me."

Livingston manager David Martindale: "I've just watched it back. Hedges has cleared the ball and kicked Jackson in the calf. I didn't think it was a yellow card at the time and watching it back, there were probably 12 challenges that were more deserving of a card.

"I have to take a lot of responsibility for the first-half performance. Aberdeen controlled the majority of the half.

"I had a gut feeling and was going to change the shape tonight but I talked myself out of it because we played that way in the previous few games and it worked quite well.

"I have to take that responsibility. We started the second half quite well and up until the extremely soft card, I think we looked like we were growing into the game.

"Once the red card came, it was pretty much 'game over'. The game was done."

Aberdeen entertain St Mirren on Saturday, while Livingston host Hearts on Sunday, with both Scottish Premiership games kicking off at 3pm.