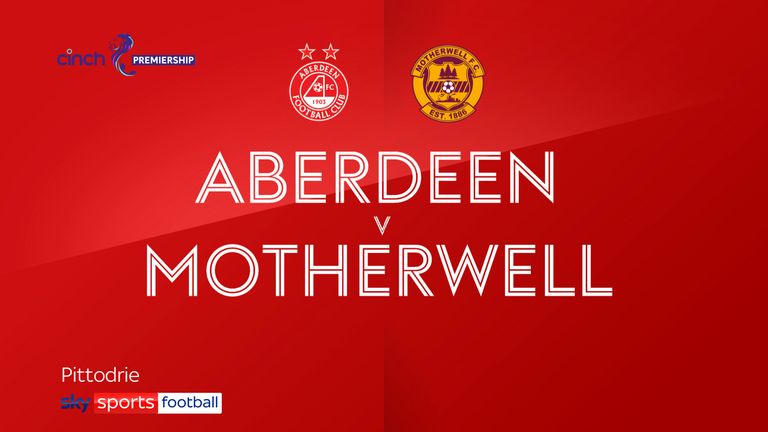 Highlights of the Scottish Premiership match between Aberdeen and Motherwell.

The Dutchman's two goals also saw the visitors open up a three-point gap on the Dons in the battle for a place in the top six of the cinch Premiership - which sees five sides separated by just four points.

Aberdeen, who were unchanged from their win over Hearts last week, would feel they should have been in front after a dominant first-half performance.

But Van Veen found the net from Motherwell's first two chances of the game to earn his side the three points.

Aberdeen were dominant in the first half, with Motherwell goalkeeper Liam Kelly having to be alert to deny Lewis Ferguson early on, and the Scotland midfielder would then shoot over after 17 minutes.

Kelly was twice called into action to deny Dean Campbell after 20 and 27 minutes, before Ryan Hedges saw a shot deflect wide off team-mate Funso Ojo just after the half hour.

And Kelly, dropped from the Scotland squad announced in midweek, kept his side level when he saved with his feet from Marley Watkins just before the interval.

The home side had a final chance before the break when a corner from the left seemed to hang in the air forever, sparking an old fashioned scramble on the six-yard line before Kelly fell on top of the ball.

But Motherwell, who had struggled to create anything in the first half, took the lead shortly into the second.

Sean Goss was the provider, his cross from the left finding Van Veen at the near post, and he flicked a low shot across Joe Lewis and into the bottom-right corner.

Van Veen added a second before the hour, firing home from close range after Ricki Lamie had nodded down a left-wing free-kick on the six-yard line.

Aberdeen rallied and Kelly was forced into saves from Ryan Hedges and then the impressive Campbell as the Dons fought for a way back into the game.

Lamie was perhaps fortunate to escape unpunished as he looked to foul Christian Ramirez in the penalty area, but Aberdeen thought they had a goal back with 15 minutes left.

Ferguson's header looked goalbound, but Kelly made a magnificent stop to keep his goal intact - and after the ball came back off the post, the keeper reacted first to grasp the loose ball.

Both teams return to action after the international break, with Aberdeen visiting Dundee United on Saturday, November 20; kick-off at 3pm.

Motherwell are at home to Hearts on the same afternoon; kick-off at 3pm.