Match report and free highlights as Gabriel Magalhaes scores a late winner after his error allowed Fulham to take the lead; Martin Odegaard levelled for Mikel Arteta's side; Gunners return to the top of the Premier League and make it four consecutive wins 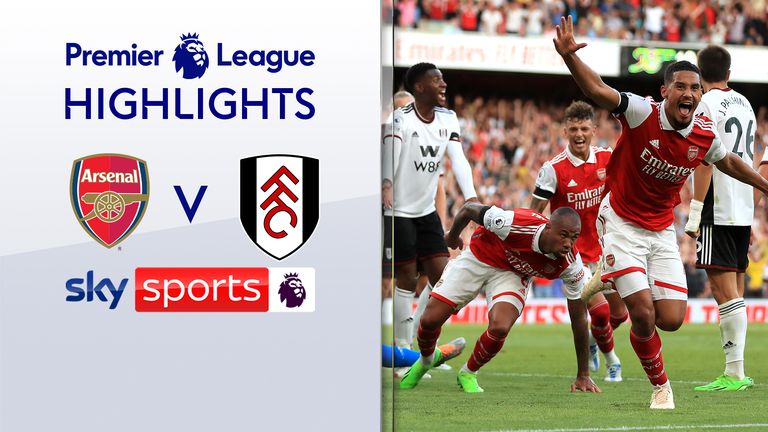 FREE TO WATCH: Highlights from Arsenal's win over Fulham

Gabriel Magalhaes atoned for an earlier error by scoring a late winner as Arsenal came from behind to beat Fulham 2-1 and maintain their 100 per cent start to the season, leaving Mikel Arteta to hail their "belief" in overcoming adversity.

Gabriel was caught on the ball on the edge of his own box for Fulham's opener, his mistake allowing Aleksandar Mitrovic to put the visitors in front against the run of play (56).

But after the excellent Martin Odegaard had pulled the Gunners level with a deflected strike from Bukayo Saka's pass (64), the Arsenal centre-back poked home from a few yards out when former Arsenal goalkeeper Bernd Leno failed to claim a corner (85).

Fulham had shown impressive resolve up until then, with Leno making a string of saves to deny his former side as the hosts dominated, but Arsenal's pressure eventually told at a jubilant Emirates Stadium, Gabriel's strike sending them back to the top of the Premier League.

Player of the Match: Martin Odegaard

How Gabriel won it for Arsenal

Arsenal came into the game seeking to maintain their winning start to the season but Fulham had an unbeaten start of their own to defend and showed resilience in the face of first-half pressure.

The hosts lacked some of their recent fluency without Thomas Partey and Oleksandr Zinchenko, both of whom picked up injuries in training on Friday, but they dominated possession and territory from the start - albeit without creating many clear chances.

Granit Xhaka should have hit the target when set up by Gabriel Jesus, while Gabriel Martinelli hit the bar direct from a corner, but their best opportunity of the first period fell to Bukayo Saka, whose one-on-one effort was well saved by Leno.

The Gunners created a flurry of chances after the break, with Odegaard and Jesus denied by Leno, but Fulham's opener arrived moments later when Gabriel dawdled and Mitrovic, whose physicality caused problems throughout, punished him to steal possession and beat Aaron Ramsdale four his fourth goal of the campaign.

Odegaard's leveller went in with the help of a deflection after Saka had picked up William Saliba's pass and moved it on to the Norwegian, and while Fulham came close to going back in front moments later, when Mitrovic was denied by Ramsdale and Ben White blocked the follow-up, the Gunners eventually made the breakthrough.

Leno could not keep hold of Martinelli's corner under pressure from several Arsenal players and Gabriel reacted quickest to prod the ball over the line and spark delirious celebrations in north London as Arteta's side maintained their flying start to the campaign.

Arsenal make it four in a row - Opta stats 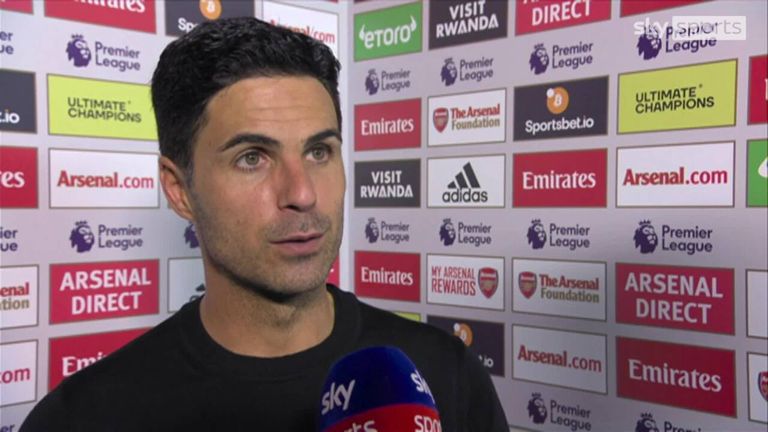 Arsenal manager Mikel Arteta told Sky Sports: "It's a big boost - and obviously to win like this as well.

"It's really nice when you feel that adversity during the match after being in control of the match and being on top of it and hoping it was just a matter of time.

"We made a big mistake and they punished us, but how we reacted against adversity, the connection again with the supporters, the atmosphere that we created, the way we went about it, the mentality that we showed, the way Gabby played after he made that mistake and the way that the team believed we could win the match… We went for it and we managed to do it.

"I think that this is just the start of the season. A long, long marathon. Everybody is going to suffer at some stage. We are in a good run and we have to try and maintain it, and be humble and hungry" 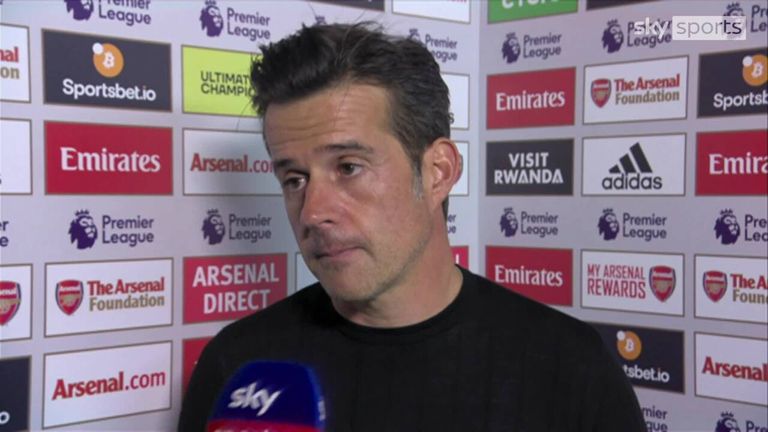 Following the 2-1 defeat to Arsenal in the Premier League, Fulham manager Marco Silva claims his side deserved something from the game

Fulham boss Marco Silva told Sky Sports: "All the credit for my players, their commitment, their attitude, their organisation from the first until the last minute.

"We were better in the second half than in the first half. We had more time and more space, and that's what we expected.

"They deserve more in terms of points, definitely. They deserve much more. The goals we conceded were unlucky. Many positives we took but unfortunately not points.

"I'm not making excuses, but nobody can compete at this level with one striker just in the starting XI.

"He's doing an amazing, amazing job. Once again it was a great performance from him, but it's impossible.

"Without wingers on the bench at this level it is impossible, but we are like we are and it is what it is. I hope the bad luck that we had this evening will come back for us in the future."

Sky Sports pundit Alan Smith insisted it is too early to consider Arsenal title contenders and urged the Gunners to focus on securing a top-four finish.

"It's a bit early for title talk," he said. "Ask me at Easter. You don't know with this season.

"I think everybody still sees Manchester City as the standard bearers, and Liverpool will get back to something approaching their standard.

"I think they [Arsenal] are a better team than they were last year. They've got that experience and they've added to the squad.

"Their aim will be top four, along with the Europa League they can give that a good go, and the domestic cups.

"They're in good form but all big clubs are measured by their league position and whether they are in the Champions League. And, for Arteta, that's the number one aim."

There was plenty to like about Martin Odegaard's performance but one moment stood out.

The game had become frantic as Arsenal chased a winner but Odegaard was calm, as he always is, skipping away from two Fulham defenders in the centre circle, drawing applause in the process, then lifting a pinpoint pass out to Gabriel Martinelli on the left.

It was just one of many instances of the Norwegian, wearing the captain's armband this season and wearing it well, demonstrating the composure and quality needed to keep Arsenal moving in the right direction and keep the pressure firmly on Fulham.

His goal, his third in two games, was of course his most significant contribution, fired in with the help of a small deflection, and it was fitting that it came after combining with Bukayo Saka.

Odegaard's understanding with his younger team-mate is almost telepathic and it could be seen throughout at the Emirates Stadium as Arsenal tore into Fulham on their right flank.

In total, Odegaard found Saka with 15 passes - six more than any other player - while Saka found him with 12 - nearly twice as many as he played to anyone else.

Fulham struggled to contain the pair at times and while Arsenal were made to wait for the decisive breakthrough, it felt appropriate that, between them, Odegaard and Saka played a crucial role in the comeback.

Saka is not the only team-mate Odegaard makes better, either. "Influence," said Arteta in his press conference when asked about Odegaard's contribution. "In difficult moments, take the ball and make things happen. That's what he has done."

And it is what he will continue to do.