By Lewis Jones at The Emirates 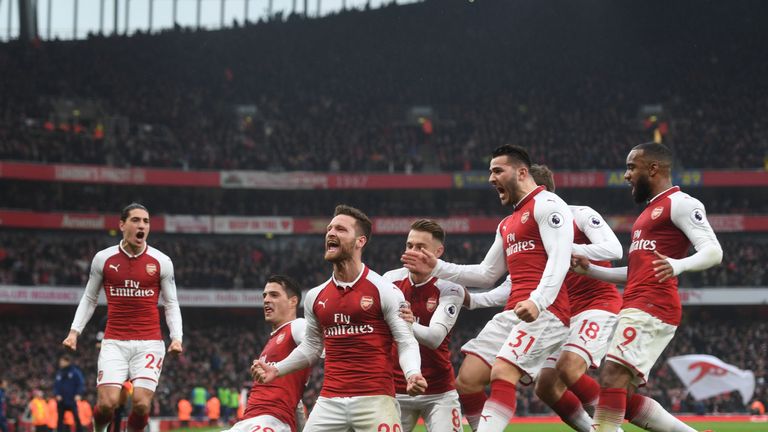 Arsenal stole the bragging rights in north London with a 2-0 victory over neighbours Tottenham at The Emirates Stadium on Saturday.

There was talk pre-match of a power shift in this area of London after Spurs finished above the Gunners last season but goals from Shkodran Mustafi (36) and Alexis Sanchez (41) ended Arsenal's longest ever winless run against their fiercest rivals (six games).

Both goals seemed to irk the Tottenham coaching staff, who could be seen remonstrating with the officials at half-time over some debatable calls from referee Mike Dean and his officials but Arsenal were worthy winners.

The defeat was Mauricio Pochettino's first north London derby reverse in the Premier League as Spurs continued to struggle away from home against the other top six teams, having now claimed just three wins from 32 away days against the 'big six'.

Meanwhile, Arsenal - who showed steel as well as style when it mattered - have won their opening six Premier League home games for the first time since 2007.

There was a heart-in-mouth moment for Jan Vertonghen on seven minutes as Mesut Ozil barged in behind him but referee Dean spotted a foul. Alexandre Lacazette was then inches away from connecting with a Hector Bellerin centre on 19 minutes but Spurs just did enough to survive.

Arsenal handed a start to Alexandre Lacazette in one of two changes – the other being Shkodran Mustafi replacing Francis Coquelin. Spurs welcomed back Hugo Lloris, Kieran Trippier, Ben Davies, Dele Alli and Moussa Dembele as Mauricio Pochettino made five changes to the team that beat Crystal Palace. Harry Kane passed a fitness test to start.

Christen Eriksen clipped a post with a 20-yard effort but it was slim pickings for Spurs, who fell behind on 36 minutes.

After a debatable foul was awarded down the left flank, Ozil whipped in an accurate ball that was wonderfully headed home by Mustafi, who was making his first start since recovering from a thigh injury.

Arsenal's pace in behind always seemed to worry Vertonghen and Eric Dier, therefore it was not a surprise when the Gunners made it 2-0 via that method on 41 minutes. Lacazette - who looked borderline offside - sprinted to the byline and cut the ball back for Sanchez. He took a touch before firing home from a tight angle. Spurs look stunned.

There was a brief rally after the break from the visitors as Harry Kane appealed for a penalty under pressure from Granit Xhaka before he picked himself up and had a low effort blocked away by the impressive Mustafi.

Moments of pressure like that were all too rare though from Pochettino's men, who looked short on confidence despite winning more away Premier League games in 2017 than any other team.

Pochettino summed up their struggles by removing Kane and Dele Alli for Fernando Llorente and Heung-Min Son with 15 minutes left. It had little effect on proceedings as despite a flying save from Petr Cech to deny Dier, Arsenal seemed in full control and saw the game out.

"If I was Arsene Wenger I'd be delighted with the performance, because you saw the two Arsenals. In the first half they were on the front foot creating chances and then when the game turned he didn't even have to come on the touchline to give instruction. They were solid and less adventurous.

"Next time out Arsenal travel to Burnley. Which Arsenal is going to turn up there? Will it be the same team that are motivated, bang at it and win all the challenges that matter?

"The quality of our concentration was very high. We never had a minute where we could feel we dropped a little bit our focus.

"Overall it was a very intense game. When you look at the performance of the two teams, it is absolutely through the roof. The players produced an immense performance on both sides.

"We have 22 points today. We are a few points short, but if you analyse our game, I can show you why."

"I'm very disappointed in the performance and the way we conceded the goals, he said.

"It's difficult to explain when you lose in this way. Small details which are big details - that can change everything in football. Maybe Xhaka should be sent-off before?

"The foul wasn't a foul. The goal was offside. But we lose. We have to go home and keep going."

This was the Mesut Ozil we all want to see. Creating havoc with the ball and mucking in when the going got tough. He looked in the mood from the off, threading balls into Alexis Sanchez and Alexandre Lacazette, which caused a huge problem for the Spurs back four.

Thierry Henry said: "The desire of the Arsenal squad is second to none today. But Ozil has been amazing.

"I'm not talking about when he has been on the ball but off the ball. What he has been doing, helping the back three at one point and then five seconds after nearly being on a one vs one situation with Hugo Lloris."

Arsenal face Cologne in the Europa League on Thursday before a Super Sunday trip to Burnley in nine days. Meanwhile, Spurs take on Borussia Dortmund on Tuesday looking to qualify for the Champions League knockout stages.