By Charlotte Marsh at the Emirates

The 29-year-old scored the only goal of the first half, sweeping home in the 32nd minute after a great Arsenal break, before Danny Welbeck nodded home the second three minutes after the interval.

Aubameyang got his second in the 56th minute with a delightful curling effort, and the tally was added to by substitute Mesut Ozil (74) as he tapped home into an open net.

Two minutes later, Ukrainian side Vorskla pulled one back as captain Vladimir Chesnakov swept home and Vyacheslav Sharpar scored their second with the last kick of the game, despite Pavlo Rebenok appearing to be offside in the build-up.

Arsenal made the breakthrough just after the half-an-hour mark as Henrikh Mkhitaryan latched onto a loose pass from Aleksandr Kobakhidze to stride down the field, picking out Alex Iwobi to his left. He continued the run with Aubameyang alongside him, slotting the ball into the path of the former Borussia Dortmund striker who swept home on the stretch. 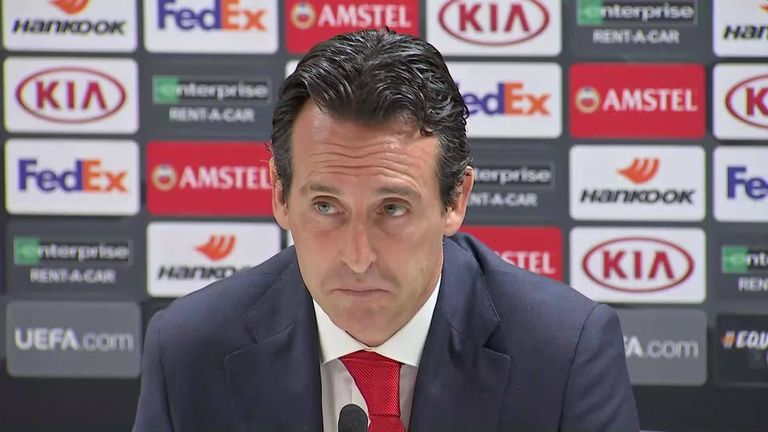 This seemed to open up Arsenal's attack and Lucas Torreira - making his first start for Arsenal - nearly doubled the lead in the 37th minute with a superb free-kick, but could only rattle the side of the net with his effort. On the stroke of half time, Bogdan Shust made two superb saves, the first denying a curling effort from Aubameyang before Mkhitaryan tried his luck, but the Vorskla goalkeeper leapt to deny them.

Arsenal carried on their good form into the start of the second half and scored within three minutes. Mkhitaryan chipped the ball into the area - getting it just around his defender - and Welbeck was there to meet it, nodding it emphatically into the back of the net.

Bernd Leno was handed his Arsenal debut in eight changes. Lucas Torreira also made his first start in midfield alongside Mohamed Elneny, who made his first appearance this campaign. Sokratis, Nacho Monreal and Pierre-Emerick Aubameyang were kept in the starting line-up from the weekend.

Aubameyang scored his second of the evening in the 56th minute with a wonderful strike. Mkhitaryan picked him out on the edge of the area and the striker played the ball through the legs of Artur before hitting a curling drive into the corner.

Ozil got in on the action in the 74th minute with the simplest goal of the evening. Sokratis Papastathopoulos picked out Lichtsteiner down the right of the box, who was taken down by goalkeeper Shust before he could strike, and Ozil was waiting at the back post to slot home into the open net.

Two minutes later, though, and Volska pulled their first goal back. A header was put back into the area after a cleared free-kick and Lichtsteiner looked to have it covered but could not clear properly, allowing Chesnakov to sweep home.

Their second came with the last kick of the game and with a touch of controversy as Rebenok's left-wing cross was turned home by Sharpar, although the former looked to be offside in the build-up.

While Arsenal's attack may not have come up against much defensive resistance, Aubameyang impressed with his performance and he has a history of excelling on the European stage. In the Europa League and Champions League combined (excl. qualifiers), he has netted 21 goals in his last 25 appearances and his latest additions on Thursday were of great quality.

He showed great pace to latch onto the end of Iwobi's cross before curling home an exquisite strike in the second half. Credit must also go to Mkhitaryan, Iwobi and Welbeck in Arsenal's attack who have all given Unai Emery some decisions to make for Sunday's game against Everton.

Arsenal are next in action on Sunday as they take on Everton, live on Sky Sports. Their next Europa League game is away at Qarabag - who lost 2-0 to Sporting in the other game in Group E - on Thursday 4 October.