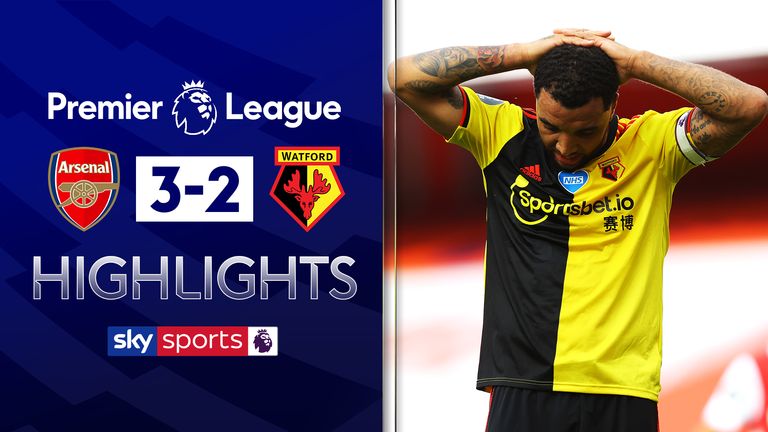 FREE TO WATCH: Highlights from Arsenal's win against Watford in the Premier League

A valiant Watford fightback was not enough to save them from relegation to the Sky Bet Championship as Arsenal clung on to secure a 3-2 win at the Emirates Stadium.

Watford went into the final day knowing they needed to better Aston Villa's result at West Ham to have a realistic chance of survival, but they fell behind to an early penalty from Pierre-Emerick Aubameyang, who then scored his second goal after Kieran Tierney had doubled Arsenal's lead.

Hayden Mullins' side looked dead and buried at 3-0 down but they deservedly pulled a goal back courtesy of Troy Deeney's penalty shortly before the break, then reduced the deficit to one goal when former Arsenal man Danny Welbeck slotted home from Ismaila Sarr's cross (66).

Watford dominated the closing stages, forcing Emiliano Martinez into a number of saves and spurning several chances, but with Villa drawing with West Ham at the London Stadium, they were unable to find the two goals they needed to stay up.

For Arsenal, the victory, however unconvincing, lifts them from 10th to eighth place thanks to Sheffield United and Burnley's defeats elsewhere.

The odds were against Watford going into this game and their chances of survival became even slimmer when, after less than a minute at the Emirates Stadium, Craig Dawson shoved Alexandre Lacazette to the ground in the box, with a penalty given to Arsenal after a lengthy VAR check.

Aubameyang converted from the spot, and he turned provider for their second goal, teeing up Tierney, whose shot deflected into the net off of Christian Kabasele midway through the first half.

Watford kept pushing forward, but they were dealt yet another blow nine minutes later when slack defending allowed Aubameyang to convert a superb overhead kick following a long throw.

That acrobatic strike put Aubameyang within a goal of Leicester's Jamie Vardy at the top of the Premier League scoring charts, but from then on it was the visitors who had the better chances.

They pulled a goal back through Deeney shortly before the break when David Luiz fouled Welbeck to concede his fifth penalty of the season, and the visitors continued to push forward throughout the second half.

Adam Masina fired narrowly over from close range soon after the break, and while Ainsley Maitland-Niles almost put the game out of Watford's reach, latching onto a clever pass from Dani Ceballos to force a fine save from Ben Foster, the visitors were soon on the attack again.

Martinez made a superb save from Welbeck in the 64th minute, but the former Gunner found a way through just a couple of minutes later, directing a low cross from Sarr into the net from close range.

Watford continued to pile forward, but Martinez denied Welbeck an equaliser with a stunning one-handed save soon after that and Aubameyang was then thwarted by Foster at the other end after he was unselfishly set up by substitute Eddie Nketiah.

Watford did not let their heads drop, but they failed to convert a flurry of chances in stoppage time, with Deeney sending a header over the bar when he should have scored.

In the end, it was a case of too little, too late for Watford. 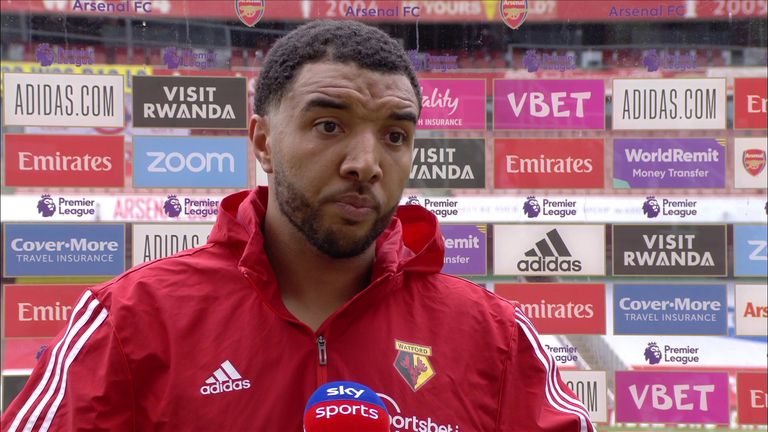 Watford captain Deeney told Sky Sports: "You've got to look at the bigger picture. It's not today, it's not last week, it's a reflection of the whole year.

"We've not quite been good enough at both ends of the pitch and it showed again today.

"It's frustrating, it's disappointing, and it's heart-breaking for the people who work behind the scenes, so we feel sorry for them. "I'll take the stick with regards to what comes, social media-wise, but the harsh reality is that those people will probably lose their jobs because we haven't been good enough.

"As players, we have to stand up, take that, and as a club and a community we'll go again.

"Individually and collectively, we haven't been good enough. From top to bottom, we'll do an audit. We'll look at where we're at, and we'll reassess."

Arteta: It was a strange game! 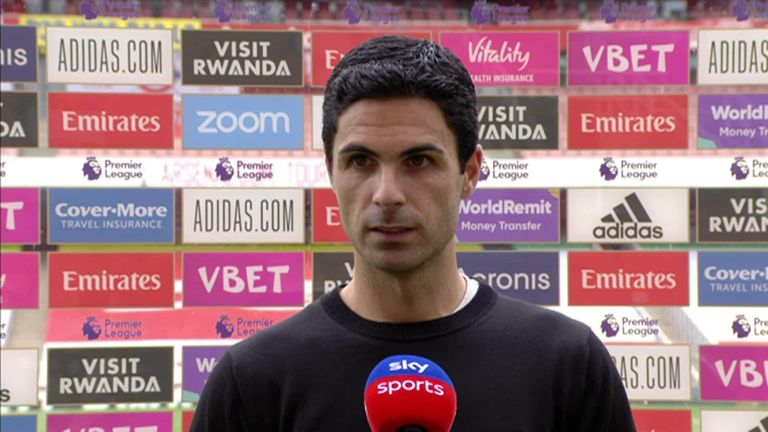 Arsenal's season is not over, with next weekend's FA Cup final against Chelsea providing a potential route into the Europa League, but Watford must prepare for life in the second tier.

The 2020/21 Premier League season kicks off on September 12, 2020, and will run until May 23 2021. The EFL has confirmed the Championship season will commence on the same weekend, with their regular seasons ending on the weekend of May 8 2021.