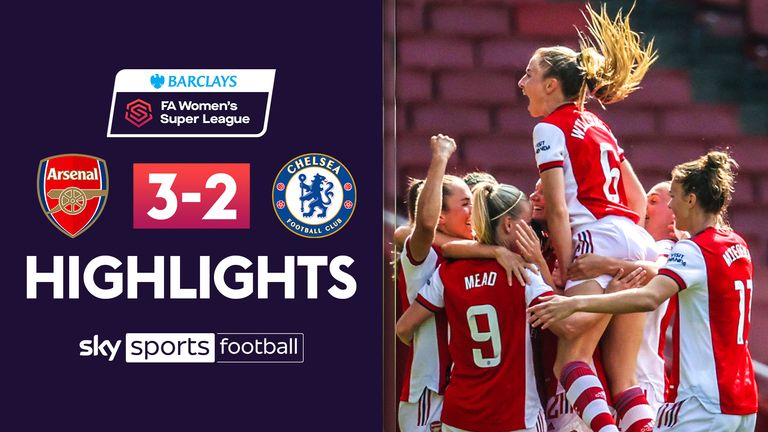 Arsenal got their Women's Super League title challenge off to the perfect start, as they beat champions Chelsea 3-2 at the Emirates

Women's Super League champions Chelsea were beaten in their season opener, losing 3-2 to Arsenal in a thrilling encounter at the Emirates.

It took just 14 minutes for the first WSL goal of the Jonas Eidevall era at Arsenal, as last season's Golden Boot runner-up Vivianne Miedema thundered an effort home into the bottom corner.

It was a similar finish at the other end as Chelsea equalised just before the break, Erin Cuthbert (44) producing a wonderful finish to make it 1-1.

But four minutes after half-time, and Arsenal restored their lead. Beth Mead (49) went it alone, firing a wonderful effort home. Eleven minutes later and the forward added her second of the afternoon, rounding the oncoming Ann-Katrin Berger to roll the ball over the line (60).

Pernille Harder (64) pulled a goal back for Chelsea shortly afterwards with a leaping header. With Sam Kerr and Fran Kirby introduced not long before, the comeback looked to be on, but Emma Hayes' side were unable to add another as Arsenal's defence held out.

It is the first time a reigning WSL champion has lost on the opening day of the season since March 2015, when Carlton Fairweather led Sunderland to a 2-1 away win against Liverpool.

How Eidevall's Arsenal saw off the champions

Arsenal began well at a sunny Emirates Stadium. Katie McCabe delivered some wonderful early free-kicks, and one of her fizzing efforts in the 10th minute needed a scrambling save from Ann-Katrin Berger to keep it from going in. Soon after, Chelsea worked Manuela Zinsberger as Magdalena Eriksson nodded Cuthbert's free-kick goalwards, but it went straight into the goalkeeper's hands.

Arsenal made the deserved breakthrough in the 14th minute. It was a wonderful ball down the left that picked out the run of Miedema in behind Jess Carter. The Arsenal striker used all of her tricks to bamboozle Carter before firing into the far corner to open her account for the new season.

Player of the match: Beth Mead.

Mana Iwabuchi - starting for Arsenal for the first time in the WSL - almost nabbed herself a goal just after half an hour. She collected a pass from Beth Mead, but her first-time effort flashed across the face of goal and into the stands from close range.

Chelsea improved in the final 10 minutes of the half, and hauled themselves level minutes before the break. They recycled a corner well, with Millie Bright's blocked shot swept into Cuthbert's path by Melanie Leupolz, and the forward rifled her shot past Zinsberger with a similar finish to Miedema's opener.

Four minutes into the second half, and Arsenal retook the lead. It was a superb goal, with a delicious through ball from Miedema setting Mead away. The forward easily drifted between the Chelsea centre-backs and into the area before sending a marvellous strike past Berger.

Six minutes later, and Chelsea introduced the cavalry with last season's stars Kerr and Kirby coming on alongside Sophie Ingle, but it was Arsenal who added a third soon after.

It was a lovely floated pass into the area from Iwabuchi, picking out the run of Mead. Berger was way out to try and smother but miscalculated her timings as the Arsenal forward skipped over her. Cuthbert did her best to try and keep Mead from striking, but there was no stopping the England international as she lightly rolled the ball over the line. Replays show there was a hint of offside, but with no VAR in the WSL, the goal stood.

Four minutes later though, and WSL champions Chelsea pulled a goal back. Cuthbert was involved again - covering most positions on the pitch on Sunday - sending in an inviting cross from the right. Harder had to lean a little bit to reach it, but sent a wonderful looping header past Zinsberger.

It was a frantic finish as Chelsea searched for that eventually elusive equaliser. In between the two goals, Bright hit the crossbar, before Kerr saw a great Guro Reiten cross just evade her as she jumped to reach it.

Chelsea continued to batter the Arsenal area with crosses - Kirby firing a late shot into the stands - but the Gunners held out for an impressive victory.

Player of the match - Beth Mead

It was an impressive performance from Mead. She scored two goals from her three shots - all of which were on target. She also had six touches in the opposition box, with each stat putting her first in the rankings.

Sky Sports' Sue Smith said: "She's been outstanding. She scored two goals, two top-quality finishes, but it's been her movement off the ball, she's just been a constant threat to Chelsea's back line with her link-up play with Miedema."

Arsenal manager Jonas Eidevall to Sky Sports: "It's a season opener, a big experience for me and the team and the club here to play a competitive game at Emirates. It was so nice we could reward the Arsenal fans with a win today, and they were magnificent during the game. I know it wasn't a full house but it sure sounded like it.

"In the beginning of the game, I thought we played out from their pressure in a really good way. We were calm and composed and we were punishing their pretty high defensive line. Then we stopped running and we get into problems, both in our pressing and build-up play.

"Then how we managed to win the game is that we showed a lot of heart defending in our box. We've talked a lot about when we defend low, we need to prioritise the central areas, we can't be too stressed in trying to put pressure on them at all costs in the wider areas. 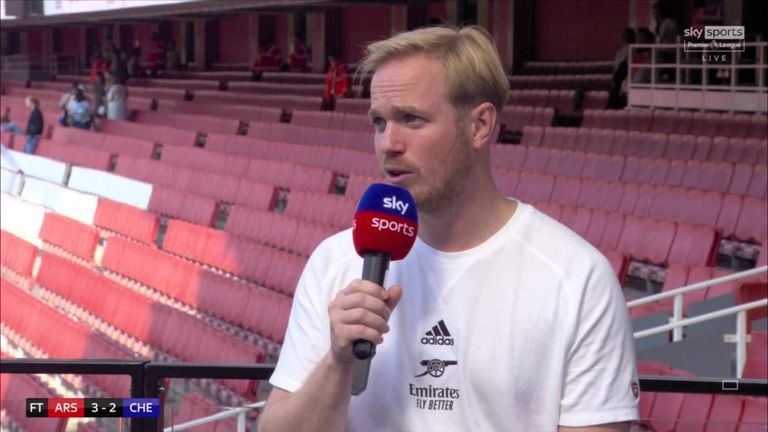 Arsenal boss Jonas Eidevall says his side showed their passion, after kicking off their WSL campaign with a 3-2 win over champions Chelsea

"We did that a little bit early in the second half and they punished us pretty hard by playing into the pocket, but once we got that sorted, we had sort of control.

"I'm new in English football, I'm new at the club and we need to develop long-term. I'm delighted that we won today, but we have a lot of learning points from this game. We are not a finished project, we are in the beginning.

"When I look at this game, I wanted a good performance, but to develop, we need to learn. This was fantastic opportunity to do so and I hope we can grow during the season, or I expect us to or I'm not doing a good job!"

Chelsea manager Emma Hayes to Sky Sports: "First of all, congratulations to Arsenal. I thought the advantages of them being together showed in certain situations, but you also can't concede three goals away and win games, no matter how good our attack is.

"I thought we kept the ball well, we created OK chances in the first half. I thought we thoroughly deserved our goal but the fashion in which we conceded the first goal showed how important it is that we're set up better in transitions. All three of their goals came from situations, and that's what I thought was the poorest part of our play today.

"They went 3-1 up, she's two yards offside, but we're not there with VAR yet. We should be demanding that. We shouldn't expect lower standards for women's football, we should demand that VAR and goal-line technology is part of our sport and as soon as possible. 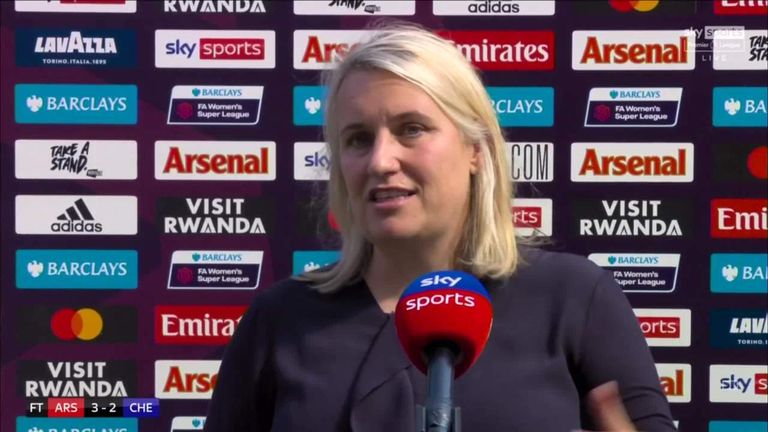 "We got ourselves back into the game, and I thought Arsenal defended the central corridor really well. It was really hard to score a goal so late on when they had so many bodies behind the ball.

"We're rusty. Mille and Magda have been at an Olympics and that's their first 90 minutes [of the season]. I think it showed in that. I suspect that's the advantage for a team that has been playing competitive games. I thought Arsenal had that little extra yard in what they were doing.

"I like the challenge. It's the first game of the season and no one wins the league today. We focus on the process and we'll be ready."

Sky Sports' Karen Carney: "Tactically, Chelsea got it wrong. They should have switched to a four. Chelsea were not good today and they have to own that. They didn't deserve to win - I'll be brutal with that. I love Emma Hayes, but Arsenal were the better side.

"Arsenal were under a lot of pressure but they stood tall and defended brilliantly. Arsenal deserved their win today."

Sky Sports' Sue Smith: "That was brilliant. We have seen two top-quality sides who will be going for the title. Arsenal got their tactics absolutely spot-on."

Arsenal are back in Champions League action in midweek as they face Slavia Prague in their second qualifying round second leg on Thursday. They hold a 3-0 aggregate lead. The Gunners will then visit Reading in the WSL next Sunday; kick-off 2pm.

Chelsea have a week of preparation before they welcome Everton to Kingsmeadow next Sunday in the WSL; kick-off 12.30pm.