Match report as Beth Mead sees Arsenal ahead inside four minutes; Caitlin Foord slots home into the far corner before curling a stunning strike past the goalkeeper; Arsenal move back to a point behind Chelsea ahead of the final round of fixtures on Sunday 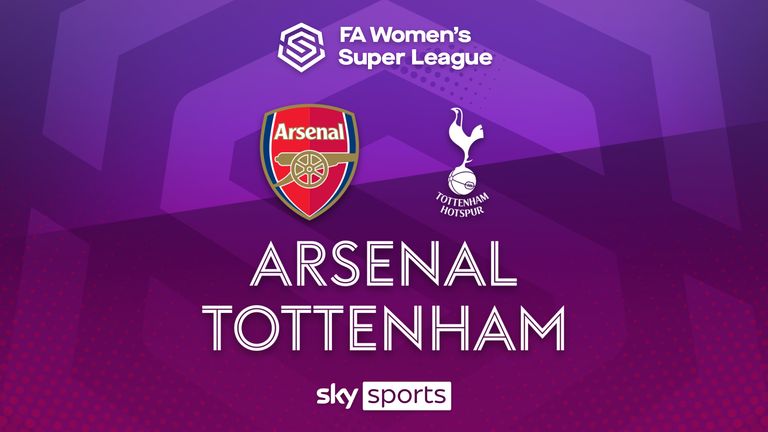 Highlights of the Women's Super League match between Arsenal and Tottenham

Caitlin Foord's double helped Arsenal to a 3-0 win against Tottenham in the north London derby at the Emirates, sending the WSL title race to a thrilling final-day showdown.

Spurs have been experts at rattling the status quo this season and had they won their first north London derby, would have handed Chelsea the title with a game to spare.

However, Arsenal have taken the race to the wire, and are a point behind the Blues ahead of Sunday's games. The Gunners travel to West Ham while Chelsea host Manchester United, live on Sky Sports Main Event, Football and Showcase from 11am.

Reflecting on the title race, Eidevall told the BBC: "I think it's exciting. It's not an easy situation for Chelsea - going out feeling like you have something to lose. Of course, we need to win.

"We'll attack the game and make sure we finish off like we believe.

"Let's believe and if it doesn't work, then of course we have to be really gutted about that, but we have to believe that anything can happen for us."

Arsenal made sure their local rivals were on the back foot from the get-go, scoring inside four minutes. Leah Williamson found Beth Mead in the middle of the park, with the Arsenal forward making an unchallenged run into the area before sending her shot past the goalkeeper.

After an indifferent start to the second half, Arsenal soon found their scoring boots thanks to Foord. Her first came from a well-worked corner, with Mead finding the feet of Vivianne Miedema. Her effort from the left was pushed away by goalkeeper Tinja-Riikka Korpela, but Foord was lurking at the far post to slot home.

But it was her second goal that was the pick of the evening's strikes. Mead again was involved, flicking the ball into Foord's feet. She took a touch to steady herself before curling a sensational effort past a helpless Korpela and securing a vital three points.

Tottenham had the chance to score a late consolation when they were awarded a last-minute penalty - Lotte Wubben-Moy fouling Angela Addison - but the latter's effort cannoned off the post.

Arsenal dominated possession for much of the first half, but Spurs' best attacking moment came shortly after the goal as the hosts struggled to deal with a corner. Ashleigh Neville was waiting to pounce, but Miedema was there to clear off the line.

It was a similar story at the other end shortly after, but Foord could not connect with the loose ball. Stina Blackstenius and Miedema both fired efforts wide before Korpela was forced into a save as Foord struck after an impressive Arsenal break.

Both sides struggled to find any rhythm after the break, although once again, Arsenal saw the better of proceedings. Miedema sent a snapshot effort goalwards, but it was an easy hold for Korpela. Foord and Little also sent crosses in from the wings, but to little effect.

Once Foord had found the net, it galvanised Arsenal as they finished the game strongly. Korpela was forced into a string of saves with Miedema testing her until the final minutes, but the goalkeeper denied the striker her 15th WSL goal of the season.

"Strong performance. It was very well deserved, winning with the margin that we did. 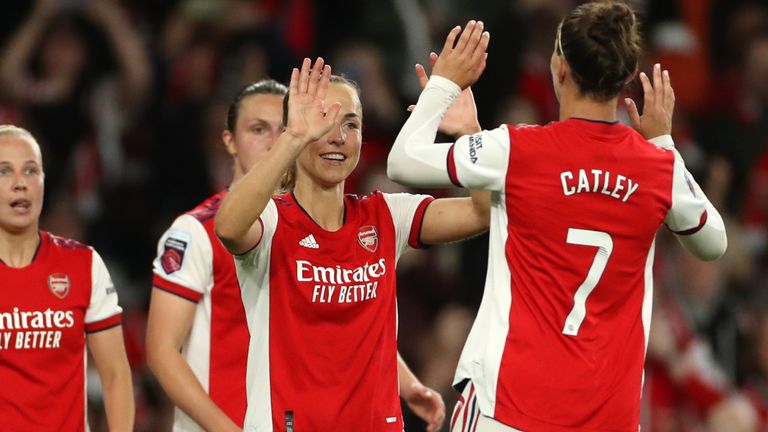 "It's about staying focused on the task; what are our objectives? I think it's very hard to be nervous and task-orientated at the same time.

"You live game by game and situation by situation - you can't jump ahead. So, that's how you've got to look at it. That's what drives results in the end. We feel good."

Little excited to be part of title race

"It was intense. A little bit similar to the game earlier in the season, where we found it hard and drew 1-1. We've played really well in our previous two games and we carried that into tonight.

"Another clean sheet, a bit lucky at the end, but another great three goals and I thought we dominated the match. A great performance from us.

"Each of these last matches, for us, it was just about getting points on the board.

As the title race heads to the final day, watch Chelsea vs Manchester United live from 11am on Sky Sports Football, Main Event and Showcase.

Also follow all the latest from across the WSL on Sky Sports' digital platforms, including in-game clips from Chelsea vs Man Utd, with match highlights from midnight.

"Obviously it's in Chelsea's hands, but we've kept the pressure on them and it's all down to Sunday now. We're glad to be in the race.

"We've ended the season really strongly. It's important for us, Arsenal have had a lot of success in the past but we want to create new success.

"There's so many good teams in the league now, I'm just glad I'm still playing and get to be a part of it.

"We need to get three points on Sunday - it's exciting. It shows a lot about the league. I'm looking forward to it."

"I can't wait. This is what we all wanted, for it to be this competitive. Even the Champions League spots aren't finished, they aren't confirmed.

"You'd like to think that after this result tonight Arsenal are firmly focused. You can see they've got an extra aura about them.

"The Chelsea vs Man United game - you just can't call it. This was a really entertaining north London derby - it had its spice. Tottenham can be proud of their performance.

"It's crucial - we're hanging on right to the very death. Anything can happen. If you're Arsenal, you have to win the game and rely on Man United to do them a favour. You always want it in your own hands.

"But they'll be hoping for that because if they don't win the title this year - huge progression under Jonas Eidevall but clearly not the heights they want to get back to."

Skinner: We looked fatigued as the game went on

"You don't come out here to lose a north London derby so it's disappointing in that respect. Over the course of the game, we had moments where we showed great quality and created opportunities. The timing of when we conceded wasn't necessarily the issue, the response was good off the back of that and we had a couple of good chances at that moment.

"When you don't take the fine margins at the time when it presents itself, that creates a momentum shift and makes life a little bit difficult.

"The way we set up to defend didn't work in the first 15 minutes, we went off-piste with how we conducted that, which caused us a lot of problems. Once we rectified that, I thought we were in the game up until half-time and came into the game in a pretty positive place.

"Ultimately, this is our fourth game in a short space of time and the players in every one of those games have given it absolutely everything. I'm really proud with the way they've gone about fighting for every point in every single one of those games.

"It just wasn't to be tonight and we started to look fatigued as the game went on, which made it a little bit difficult for us.

"One game doesn't define us, but to make sure we're really competitive next season, we've got to make sure we do see out the games that we get presented with an opportunity to see out.

"We've still got a game left to play and we want to finish on a high at the weekend, at home in the Tottenham Hotspur Stadium with our fans. There's still things we want to achieve this year."

It all comes down to the final games of the season on Sunday May 8. Arsenal will travel to West Ham while Tottenham host Leicester at the Tottenham Hotspur Stadium. Both games kick off at 12pm.

Watch Chelsea vs Manchester United as the WSL title is decided on Sunday, live from 11am on Sky Sports Main Event, Football and Showcase