Substitute Romelu Lukaku inspired Chelsea as they came from behind to beat Aston Villa 3-1 at Villa Park.

Reece James' first-half own goal had given Villa the lead but Jorginho converted a penalty soon afterwards after Matty Cash's foul before Lukaku turned the game from the bench.

He headed Chelsea in front within 11 minutes of his introduction and then burst through late on to win another penalty that was once again scored by Jorginho.

Man of the match: Romelu Lukaku

Villa boss Steven Gerrard was missing after testing positive for Covid-19 but Thomas Tuchel's presence was certainly felt with that bold half-time substitution, removing Trevor Chalobah to bring on his striker.

How Chelsea won it

City's emphatic 6-3 win over Leicester City earlier in the day had opened the gap on Chelsea to nine points at kick-off, a series of draws having undermined their title charge.

Villa appeared to fancy their chances from the outset, starting brightly while Chelsea struggled to find space in behind, with Mason Mount's cross-shot their best early opening.

Villa made two changes from the side that beat Norwich a week-and-a-half ago - Ashley Young and John McGinn were out of the squad, replaced by Morgan Sanson and Danny Ings.

It was also just two changes for Chelsea from the 0-0 draw with Wolves last weekend - Jorginho and Callum Hudson-Odoi came in, replacing Hakim Ziyech and Cesar Azpilicueta. Romelu Lukaku was only well enough for the bench.

The home side were rewarded for their enterprise start in unusual fashion when Matt Targett's cross skimmed off the head of James, looping beyond goalkeeper Edouard Mendy. James heads past his own keeper!

The Frenchman should probably have done better, going for the ball with both hands when one might have sufficed, but Chelsea were soon level after an error at the other end.

Callum Hudson-Odoi snuck in behind Cash who lunged for the ball and got the man. The full-back had his head in his hands almost before the referee had pointed to the spot. 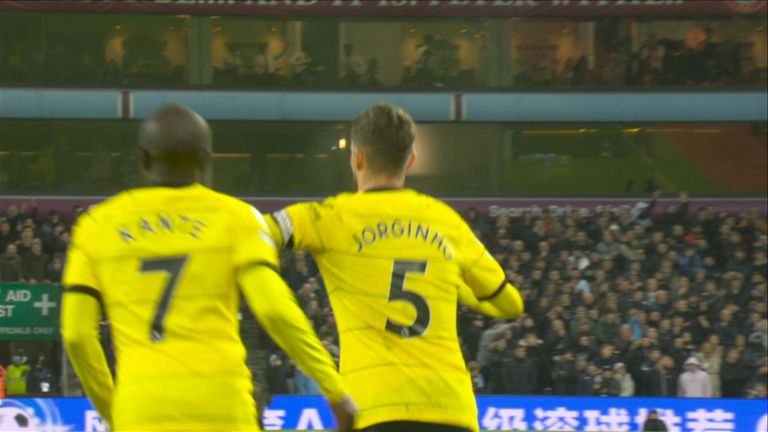 Emi Martinez attempted to disrupt Jorginho's penalty preparation and received a yellow card for his antics but the Chelsea midfielder sent him the wrong way with his kick.

It was a fifth penalty in six games for Jorginho, Chelsea's top scorer last season and this, but goals up front have been the issue and Lukaku's introduction addressed that immediately.

Bringing him on for Chalobah at half-time was a statement of intent and Lukaku, who has not started a Premier League game since October, soon altered the game's momentum. 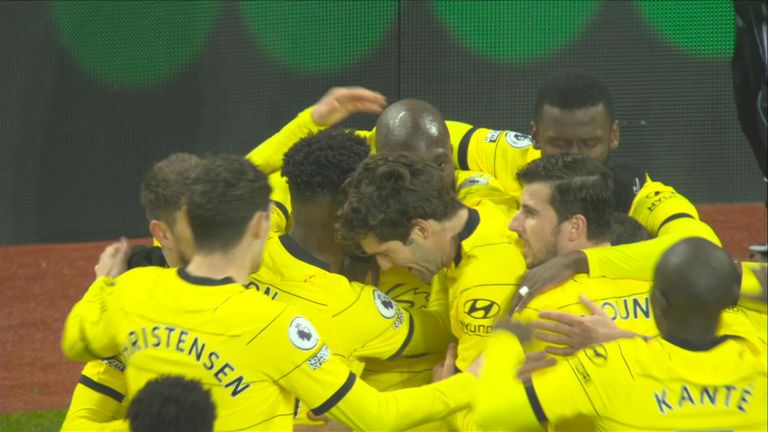 Lukaku comes off the bench to score!

His clever movement allowed him to evade Tyrone Mings and beat the Villa captain to Callum Hudson-Odoi's left-wing cross, nodding beyond Martinez low into the net.

Suddenly, Chelsea had a focal point and Mount should have doubled the advantage within minutes, uncharacteristically dragging his shot wide of the near post after beating Martinez.

It did not prove costly with Villa unable to generate any attacking pressure on the Chelsea defence. Mendy did not make his first save until late in the game and it was an easy one. 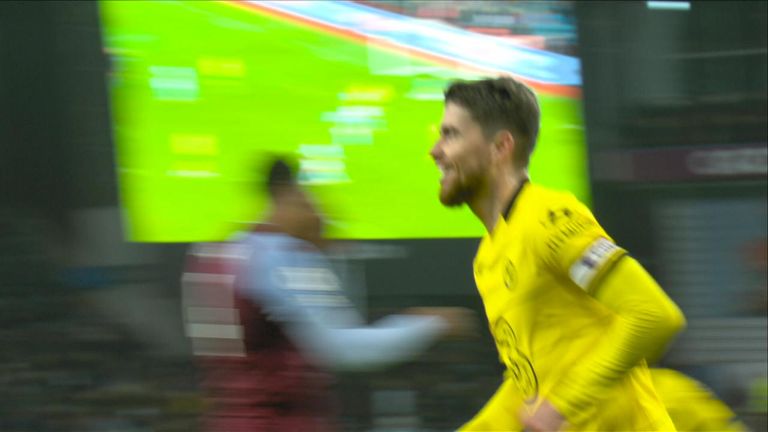 Jorginho had the final word with his second penalty of the game but only after Lukaku had underlined his impact by winning it - bursting through before being hauled down by Ezri Konsa.

He may have returned just in time to keep Chelsea dreaming of the title.

Tyrone Mings had looked comfortable for much of the first half but that changed with the arrival of Lukaku. Christian Pulisic had drifted around. Lukaku put himself on Mings.

He outmuscled him within a minute, leaving the Villa captain on the deck. His movement was too much for Mings for the second goal, ensuring he got to the ball first.

There was a booking for Mings not long afterwards, almost appearing exasperated as he tugged at the shirt of Lukaku, unable to get close to the ball given the striker's frame.

But there was intelligence to his play as well, unselfishly feeding Mateo Kovacic to set up Callum Hudson-Odoi for a good opportunity late on.

And then there was the pace, racing away from Matt Targett and Ezri Konsa to win Chelsea's second penalty. In 45 minutes, he showed everything that you would want in a striker.

And everything Chelsea have been missing.

Aston Villa assistant Gary McAllister on Sky Sports: "Looking at the result, I think it flatters Chelsea a bit. They have some very good players. Romelu Lukaku made a difference. I felt that we played some good football and we kept the ball away from our goal, but then they made the changes, and they came out on top. 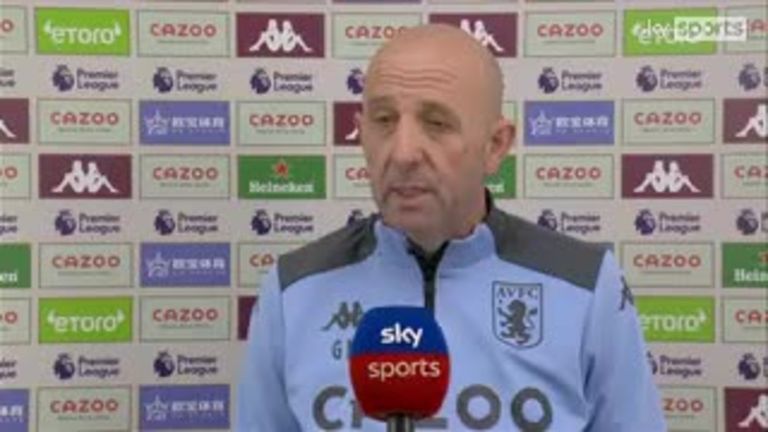 "In the phases of play I thought we were better in possession at times but the wrong decision was made with the final pass at times. We started the second half very slowly and we sunk a bit, and hence lost that goal to Lukaku's header. We tried to play with an intensity and make passes.

"We know it is very important to get possession of the football against a quality side like Chelsea. We have played City, Liverpool and Chelsea in the last few weeks and had the chance to have a look at the elite teams and it's encouraging that we have competed very well. A bit of identity is starting to appear."

Chelsea manager Thomas Tuchel on Sky Sports: "It's a big victory. The reaction was very, very good, and the mentality was outstanding. We did not allow any chances and created a lot of chances. Job done, but we are worried. We have another injured player. We play against a team with no international duty. At some stage it'll catch us.

Thomas Tuchel says he is concerned about player safety

"It gives us satisfaction to win, but it's not enough changes for us. Five subs was invented because of Coronavirus. Europe has a winter break but we play through and put it on the players' shoulders. They make us play all the time even if we have Covid. We have new injuries and it won't stop. People at the green table, somewhere in offices make these decisions.

"It's not fair today. He [Lukaku] had a very good performance, he was very helpful, but it's not fair. He's not ready for that even if he wants it. We've all been in bed for 10 days with flu. I did not play two days later a match at Villa Park - we don't know what happens from that. We just put the players in but we don't know [what the impact is]. He was a game changer today. I'm super impressed with the guys but I'm super concerned."

Chelsea host Brighton in the Premier League on Wedneday evening at 7.30pm, while Villa's next game is at Brentford on January 2, live on Sky Sports Premier League at 2pm, after their clash at Leeds on December 28 was postponed due to Covid positives in the Leeds squad.