Manchester United's alarming away form continued as they were held to an uninspiring 0-0 draw against AZ Alkmaar in the Europa League.

Ole Gunnar Solskjaer's side failed to register a shot on target in the Europa League for the very first time as their winless run on the road stretched to a concerning 10 games.

United were indebted to David de Gea for a string of second-half saves as they escaped with a point that leaves them second behind Group L leaders Partizan on goal difference, who they face on October 24.

But that slight positive for Solskjaer was undone by the loss of Jesse Lingard to injury late on, leaving the United boss' attacking options further depleted ahead of his attempt to head off a gruelling run of away fixtures.

"It's a good point away from home against a difficult opponent on a tough surface," summarised Solskjaer.

Man of the Match: Yukinari Sugawara

10 - Manchester United have failed to win any of their last 10 away matches across all competitions (D4 L6) – they last went on a longer winless run on the road between February and September 1989 (run of 11). Worrying. pic.twitter.com/doznd0WEp9

Solskjaer made eight changes following Monday's draw with Arsenal. Left-back Brandon Williams made his first senior start while Mason Greenwood started in attack in a side with an average age of just over 24.

The artificial surface at the Cars Jeans Stadion - AZ's temporary home while their stadium in Alkmaar is repaired after the roof collapsed - provided an early test for United's young side, but it was their inexperience that the Dutch side exploited.

United nearly paid the price for some lapse defending from a corner on 11 minutes, but the linesman's flag bailed them out after Myron Boadu had glanced Fredrik Midtsjo's cross into the back of the net. Then, as the hosts grew in confidence, Oussama Idrissi then stung the palms of captain De Gea on the quarter-hour.

It took half an hour for United to muster an attack as Diogo Dalot's brilliant cross from the right fell for Greenwood in the area, but his instinctive first-time shot was blocked by Ron Vlaar.

But it wasn't long before AZ were back on the attack, Boadu spurning a glorious chance to open the scoring when he lost his footing and directed a tame header into the arms of De Gea, and the one-way traffic continued in the second period.

Solskjaer turned to Marcus Rashford and Lingard on the bench and Rashford should have been awarded a penalty when Stijn Wuytens brought him down in the area on 80 minutes.

Lingard nearly snatched an unlikely win as his instinctive first-time volley flashed over the bar with six minutes remaining, but that was all United could muster before the forward hobbled off, leaving Solskjaer's side with 10 men as they held on for a point in Holland.

0 - Manchester United have failed to have a shot on target in a UEFA Europa League game for the first time in their history (25 games). Blunt. pic.twitter.com/f3ADg6Qow6

The stats behind United's struggles 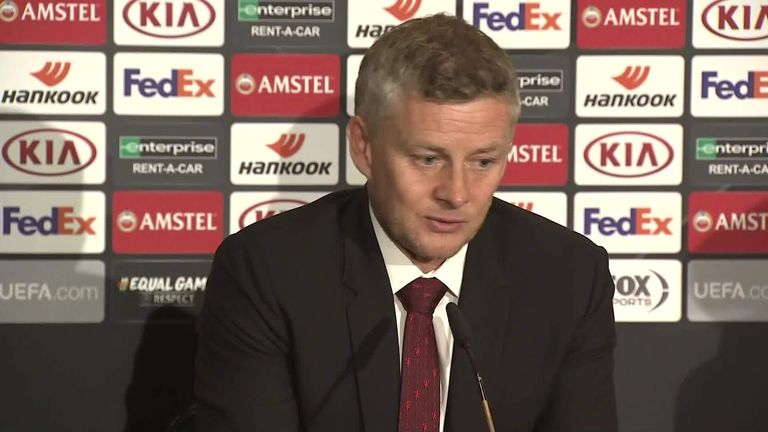 Ole Gunnar Solskjaer was pleased with Manchester United's performance as they drew 0-0 at AZ Alkmaar in the Europa League without recording a shot on target.

Man Utd manager Ole Gunnar Solskjaer: "It's a good point away from home against a difficult opponent on a tough surface. They beat Feyenoord 3-0 away the other day. We made many changes and I'm very pleased. Of course it should have been a win, I'm fed up talking about penalties we should have had, Arsenal on Monday and now.

"You cannot get that decision wrong in football. The linesman looks straight at the tackle on Marcus and the defender wiped his foot off the floor. So it's a bad decision, unfortunately we didn't get it, but there is no point me complaining. There will come a point when these decisions go our way."

AZ and United resume their Europa League campaigns against Astana and Partizan respectively on October 24 at 5.55pm.