FREE TO WATCH: Highlights from Brentford’s win over Arsenal

Brentford marked their Premier League bow with a memorable 2-0 victory over a tepid Arsenal on the opening night of the new season.

Amid a celebratory atmosphere for Brentford's first top-flight game since 1947, and the first in front of a full house at their new stadium, the Bees took the lead as Sergi Canos caught out Bernd Leno with a flashed, near-post effort from 15 yards in the 22nd minute.

Arsenal rallied briefly in the second half but failed to find a leveller, and found themselves 2-0 down through Christian Norgaard's header following poor defending from a long throw with 17 minutes remaining.

"New season, same old story," remarked Sky Sports' Jamie Carragher on commentary and it does not get much easier for Arsenal in the Premier League; they host Chelsea and then go to Manchester City, but Brentford sit top of the league for a few hours at least on a night to remember for their returning fans.

Man of the match: Ivan Toney

At kick-off, Brentford's starting XI had 10 minutes of Premier League experience in Ivan Toney, while Arsenal's front four included two 20-year-olds, a 21-year-old and a 26-year-old, but it was clear by full-time who looked the more savvy.

Brentford manager Thomas Frank had promised to be bold this season, and after his side received a raucous welcome in west London, it was the hosts who had the advantage in the first half.

Having failed to register a touch in the final third in the first 10 minutes, Frank gestured to urge his side to push higher, and he was immediately rewarded. Minutes after Bryan Mbeumo had hit the post from an angle on the right of the box - Leno did have it covered - they took the lead.

During a period of pressure, Canos cut in from the left of the box and caught Leno off guard by smashing a low effort into the bottom-left corner. The home crowd erupted.

It should have been two not long after; Mbeumo initially looked to have lost the ball in the box, but retrieved it before swivelling past two Arsenal defenders, but, with only Leno to beat, he dragged his effort wide.

Thomas Frank went with a back three and handed a debut to new signing Kristoffer Ajer in defence. Fellow new signing Frank Onyeka also was handed a start in midfield after scoring in the pre-season win over Valencia, while Ivan Toney was fit to lead the line.

Arsenal's defence, including new £50m signing Ben White, were struggling to deal with Brentford's high press and running in behind, but they came out brighter in the second half as Emile Smith Rowe's wonderful turn, run and shot was tipped away by David Raya.

Folarin Balogun, on his Premier League debut, was replaced on the hour mark by Bukayo Saka, who was given an ovation by all four stands after a memorable Euro 2020 with England for both the right and wrong reasons. 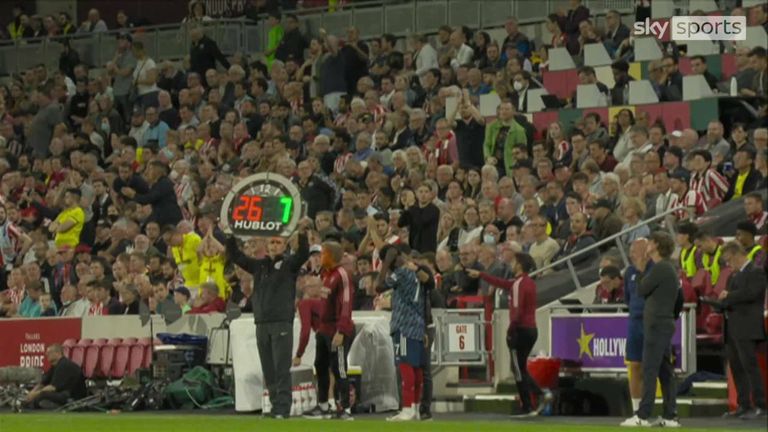 Kieran Tierney's deflected effort flew inches wide of the post shortly after, as did Granit Xhaka's lashed effort at the far post, but Brentford got their second with just over 15 minutes remaining.

From Mads Bech Sorensen's long throw, Toney got ahead of White for the flick on, allowing Norgaard to simply head home a few yards out.

Arsenal will feel there was a foul by Pontus Jansson on Leno in the build-up, but the visitors' otherwise calamitous defending prompted Carragher to conclude on commentary: "How would you describe Arsenal's defending here? It's just Arsenal. Weak, bullied. New season, same old story."

But it was a new chapter in Brentford's history as they rode the wave of emotion to get their first Premier League season off to the perfect start with a faultless display.

Brentford boss Thomas Frank on Sky Sports: "The fans were amazing, what an atmosphere. I'm a bit speechless. First time in the top flight, we're opening the Premier League season, fans can dream we're number one in the Premier League. It's a fantastic story.

"We're just a bus stop in Hounslow, we're not supposed to be here. We will celebrate every win, but we want more.

"I think the players today were amazing, they ran themselves to the ground, played with intensity, they were brave and pressed high constantly.

"On set-pieces I thought we were better, that's why we did long throws and at times we could go high and knew that we could win the ball and create chances. 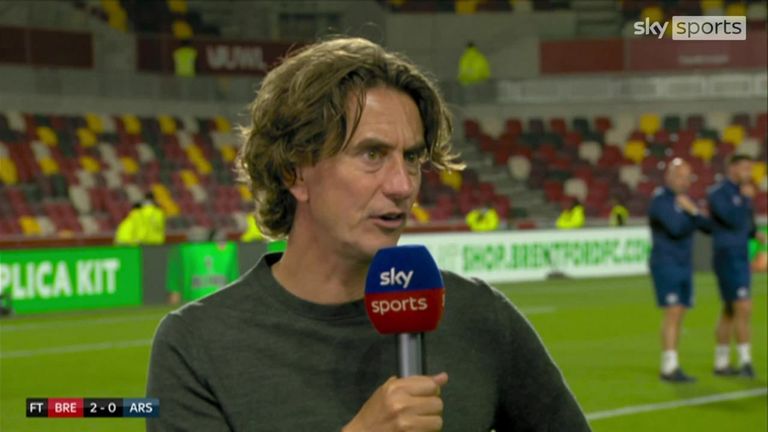 "Ivan (Toney) has an unbelievable character and mentality and he has such a presence on the pitch. How many duels he wins... he can link-up and press for the team. He is very important to us.

"Bryan (Mbuemo) did a good job of stretching them, of going one-v-one and with his pace he is a big threat."

Arsenal boss Mikel Arteta on Sky Sports: "I'm disappointed. It's not the way we wanted to start the season. We didn't start well, conceding a goal in an isolated incident. We didn't cope well with the second balls or long balls. And that's all they needed to create problems for us. Then we conceded from a long throw.

"The biggest worry was our threat in front of goal. The amount of times we got around the box and got in great situations but it wasn't enough threat or shots on target. If you don't do that in the Premier League then you won't win. 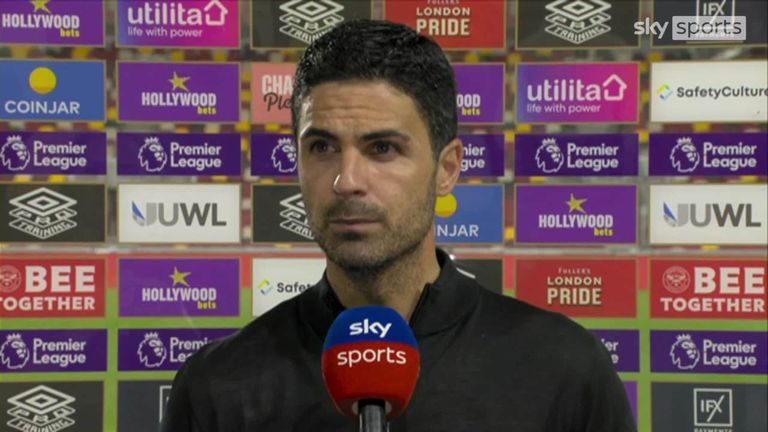 "I don't want excuses - we missed players but I don't like to hide. We weren't good enough to beat them. We didn't do the basics.

"It's a long run, we've started in a disappointing way but we'll review and speak with cool heads and try to put it right as soon as possible."

Brentford travel across London to Crystal Palace next Saturday at 3pm, while Arsenal host Chelsea on Super Sunday on August 22 at 4.30pm, live on Sky Sports Premier League.