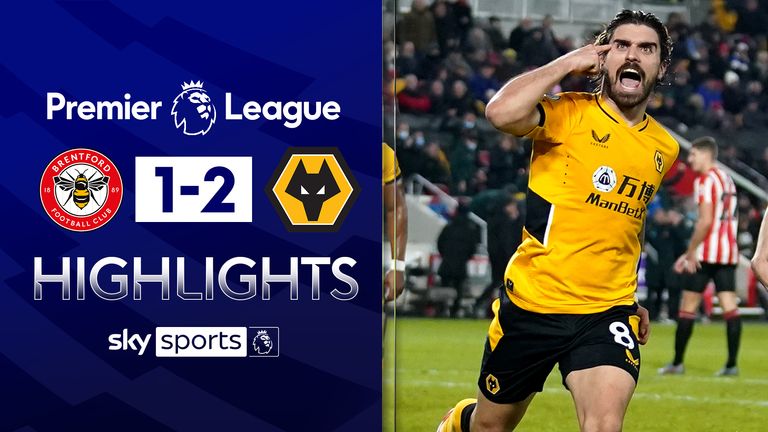 FREE TO WATCH: Highlights from Wolves' win against Brentford

Ruben Neves' sublime 78th-minute strike helped Wolves secure a 2-1 victory in an eventful game at Brentford after a drone stopped play for 19 minutes in the first half on Saturday.

The game looked like being remembered for a bizarre incident which saw both sets of players forced off the field of play, but Joao Moutinho sparked the contest into life with another moment of magic to give Wolves the lead (48).

Wolves defender Tito was then initially sent off after a challenge on Kristoffer Ajer (66), but after referee Peter Bankes overturned the decision upon VAR review, Brentford immediately levelled from the free-kick as Ivan Toney met Bryan Mbeumo's cross to volley home his sixth league goal of the season (71). 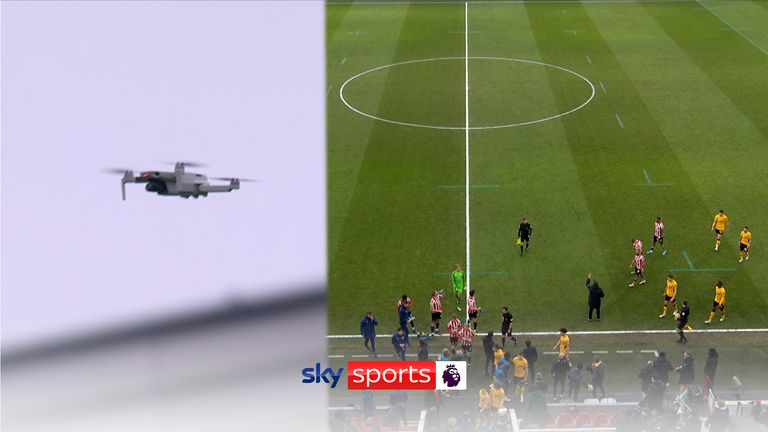 A drone flying over the Brentford Community Stadium forced play to be suspended between the Bees and Wolves and resulted in the players leaving the pitch.

Wolves would not be denied, however, as Moutinho turned provider for Neves to steer his shot into the bottom corner as Bruno Lage's side strengthened their grip on eighth place - four points off Manchester United in fourth with a game in hand.

Tensions boiled over after the final whistle with referee Bankes showing Thomas Frank a red card. "I was frustrated we didn't get a point but I was relatively calm and there was a situation which triggered it," explained the Brentford boss.

"I got a yellow card after a confrontation with a Wolves player, then I turned round to Peter and said 'you can give me a second one as well'. He said it was because I was turning around and too aggressive.

"I want the players to control their emotions and not get silly cards so it's disappointing I could not control my emotions."

Only Watford (8) have lost more Premier League home games than Brentford this season (7), and this fourth consecutive defeat will have Frank looking nervously over his shoulder.

The result means the Bees have now conceded 12 goals in their last four Premier League games, with Frank's side remaining in 14th position, eight points above the relegation zone. 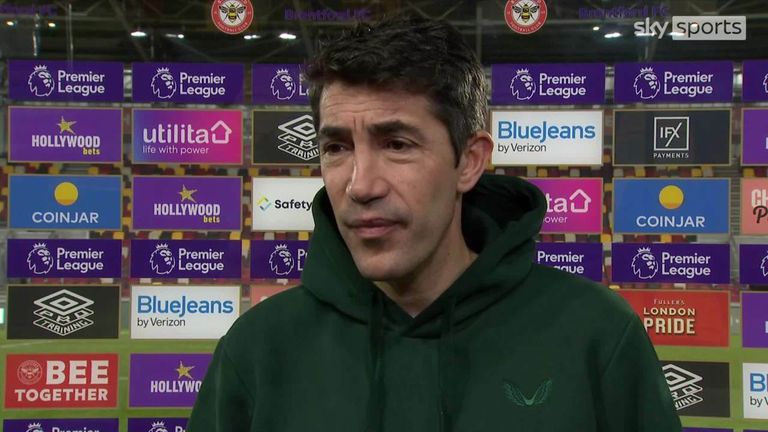 Bruno Lage praised his players mentality in their victory against Brentford and challenged his side to continue the impressive form they have shown in recent weeks.

Man of the match: Joao Moutinho.

How Wolves won after drone delay 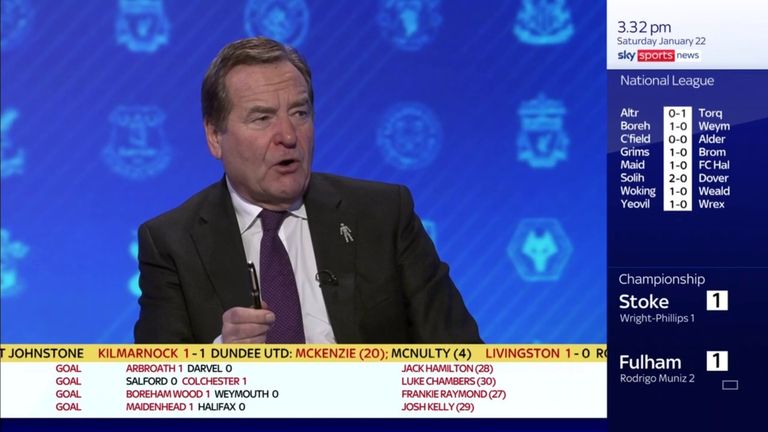 With the game being stopped at the Brentford Community Stadium because of the drone, Jeff Stelling saw the funny side of the incident with Clinton Morrison.

Lage will now belatedly embark on a journey to see his family after yet another impressive away win. The Portuguese head coach was made to work and wait for this third straight league triumph, joking afterwards: "British Airways won't wait for me, and I need to see my kids!

"It was a strange first half and the two breaks didn't help our rhythm but we played very well in the second half. My players brought the will I wanted. With time to work with the team, with consistency and personality on the ball, our performances in December and January have been good.

"The only thing I can guarantee to the fans is that we will bring the three key things to every game. Personality, consistency and the right mentality - these three things you need all the time in every game. We'll bring that energy when we come back in February because we're going to need it."

Brentford made two changes to the side that were beaten 3-1 by Manchester United as Rico Henry and Kristoffer Ajer came in for Mads Bech Sorensen and Mads Roerslev.

Wolves welcomed back Ruben Neves but Raul Jimenez was missing from the matchday squad as Fabio Silva led the line. Francisco Trincao dropped to the bench.

Sergi Canos sliced wide inside two minutes under pressure from Rayan Ait-Nouri having been picked out by Vitaly Janelt, but the chance didn't set the tone for an eventful first 45 minutes - at least on the pitch.

There was a lengthy stoppage when Rico Henry and Mathias Jensen clashed heads going for the same ball, with the pair both being replaced as a precaution against concussion following the sickening collision.

"It was horrible," added Frank. "When they were running I was thinking, 'oh my God, this is going to be bad'. But they are good. Mathias is clear of concussion and Rico will be assessed."

It meant Wolves could make five changes while Brentford still had their usual complement of three, and when the game resumed, Nelson Semedo ought to have done better when he blazed over from the edge of the box.

Just when you thought you'd seen it all, the game was then halted a second time inside the first half when referee Bankes directed the players off the pitch for 19 minutes due to an unofficial drone being spotted overhead.

Premier League regulations state the game had to be stopped in the interest of player welfare, to the dismay of disgruntled supporters, with the stadium announcer providing a suitable update.

Frank said on the incident: "I was involved in a game for the Danish Under 17s team at the World Cup in 2011 where lightning meant we had to wait for two hours, but the game was then called off so I don't know if it counts. If they find the person who did this, I'm sure they will get fined as they're disrupting a match."

A Brentford spokesperson told Sky Sports News: "Given the risks, the match officials and the stadium safety team followed agreed protocols to suspend the game and remove both teams from the pitch. 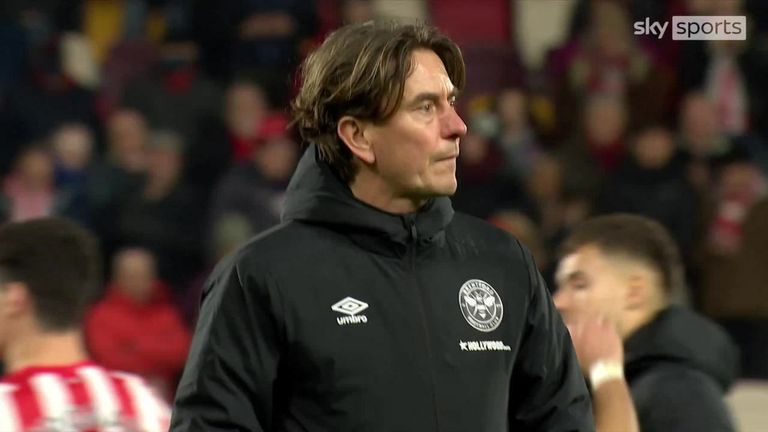 Brentford's head coach Thomas Frank was sent off after the Bees' 2-1 loss to Wolves following an argument with referee Peter Bankes.

"The police are now investigating the incident."

A Metropolitan Police spokesperson told Sky Sports News: "We are aware of unauthorised drone being flown over the Brentford Community Stadium during the Brentford v Wolves match. Enquiries are ongoing. There have been no arrests."

Following the drone incident, there was then a four-minute delay at the start of the second period as Bankes had to fetch a new electronic kit to attach to his arm, leading to yet more derisory chants towards the match officials, but Moutinho would soon be providing the spark.

The 35-year-old is in the autumn of his career, but appears to only be getting better with age as the Portuguese midfielder collected Semedo's pass before caressing the ball with the outside of his right boot to find the far corner of Jonas Lossl's net.

Brentford fans were further angered when Bankes stopped a clear advantage to send off Wolves defender Tito on 66 minutes after a challenge on Ajer but after VAR Lee Mason informed him to consult the pitchside monitor, the card was downgraded to a yellow.

The hosts would equalise from the ensuing free-kick, however, as Bryan Mbeumo's delivery found the unmarked Toney to drive his volley across goal into the far corner beyond Jose Sa.

Frank urged his players on to complete the turnaround, and yet Neves would have the final say. Once again, Semedo was involved as his cross from the right found its way through to Ait-Nouri on the opposite flank, and after the full-back laid the ball back to Moutinho, the veteran showed all his experience to set up Neves for a precise finish into the far corner.

Substitute Adama Traore thought he had put the game to bed when he ran onto Neves' pass to blast the ball beyond Lossl at his near post in stoppage time, and while the goal was disallowed for offside after a VAR review, Wolves clung onto the victory.

"In general, I thought we played a solid game," Frank said afterwards. "We gave away two goals which weren't really chances.

"If there was one team that deserved to win today, it was us. It was a great goal from Moutinho. For the second goal, I feel we could've got closer and Jonas could've done better as well. I haven't seen the stats, but I think by far we had the most shots in the game today so I thought we were fine." 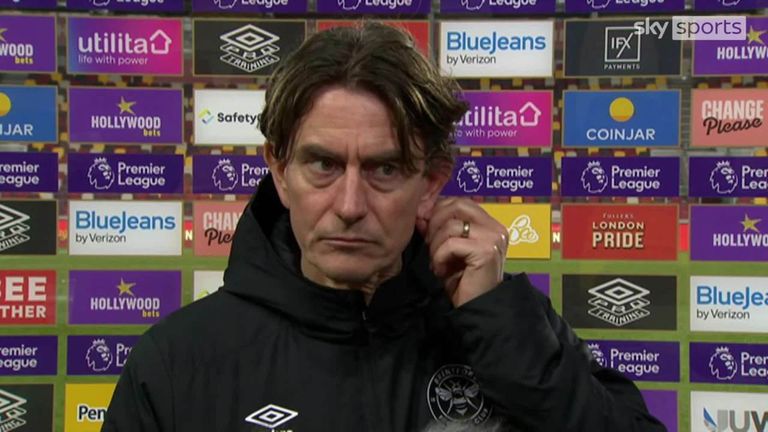 From the ridiculous to the sublime. At one stage, you wondered whether this game would ever end after three separate stoppages, but Moutinho and Neves have been providing moments of quality throughout their respective careers.

Wolves are certainly a force and cannot be ruled out of the race for the Champions League places at this rate, extending their unbeaten run to six games in all competitions. Indeed, the Midlands club have started a calendar year with three consecutive league victories for the first time since 1994.

They arrived in West London eighth in the table, where they remain having dropped only two points in their last five Premier League games but they are now only four points behind fourth-placed Manchester United with a game in hand.

On this evidence, Lage won't need to do too much strengthening in the remaining days of the January window. Writing in his programme notes, Frank called on his Brentford team to "play with intelligence", describing their victory at Molineux in September's reverse fixture as "was one of our best performances of the season".

With the game still goalless at the interval, it meant Wolves have stopped the opposition from scoring a first-half goal in 17 of their 21 games - only Manchester City (20) have done this more often in the Premier League this season.

But of more concern for Lage is that his side have failed to score a first-half goal in 16 of their 21 games, with only Norwich City (17) having failed to score more often in the division.

That changed in the second period, and this wily Wolves side always appeared to have their opponents at arm's length.

"We're on our way to Europe," sang their supporters. They've been going under the radar this term, but their intentions are now being heard loud and clear. The top six is firmly in their sights, and who knows what lies beyond that?

With Arsenal and Tottenham coming up next, Lage will hope the winter break doesn't halt their momentum.

Man of the match - Joao Moutinho

Wolves' João Moutinho has scored more than once in a single top-flight league campaign for the first time since 2016-17 with Monaco (2), while his strike today was his first Premier League goal from inside the box.

Moutinho has both scored and assisted a goal in a single league match for the first time in six years and five days, last doing so with Monaco against Lorient in January 2016.

Brentford visit Everton in the FA Cup fourth round on Saturday February 5 at 3pm while Wolves host Norwich at Molineux in the same competition at the same time.