Match report and free highlights as Everton record their first win at Brighton since April 1983; Demarai Gray and a Dominic Calvert-Lewin penalty earn victory for Rafael Benitez's side 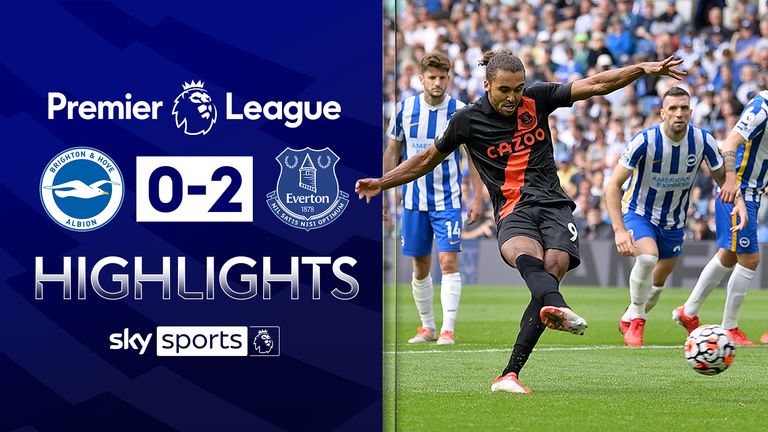 FREE TO WATCH: Highlights from Everton's win against Brighton in the Premier League

Brighton's perfect start to the Premier League season was ended as Everton recorded a fine 2-0 win at the Amex Stadium on Saturday.

Demarai Gray's own resurgence continued on the south coast as his precise finish broke the deadlock four minutes before the interval following a solo run.

Rafael Benitez has now collected seven points from his opening three games as Everton manager, and his side doubled their lead from the penalty spot through Dominic Calvert-Lewin, albeit only after wrestling the ball off his team-mate Richarlison.

Everton's first win at Brighton since April 1983 temporarily moved them up to second place before both Liverpool and Chelsea moved above them on Saturday evening following their 1-1 draw, while the Seagulls slip to seventh.

Man of the match: Seamus Coleman.

"From the beginning, the team has shown me great spirit, desire and organisation. Today there were a lot of positives," Benitez said afterwards.

The Spaniard sported a smile as he saluted the Everton supporters who had made the long trip from Merseyside and, amid a summer of obstacles, his side head into the international break in the top four.

His rebuild is gathering momentum, with the only sour note coming when Calvert-Lewin hobbled off in the second half while Richarlison kicked over a water bottle as he departed following a frustrating afternoon for the forward who has been linked with a move to Paris Saint-Germain ahead of Tuesday's deadline.

The home side had never lost in eight Premier League meetings between Brighton and Everton, and Graham Potter's men looked the more cohesive unit in possession during an opening period low on clear-cut opportunities.

Neal Maupay, seeking a third league goal in as many games and fresh from reports linking him to a move to Everton, drove over from 22 yards after 12 minutes.

It captured the Frenchman's current confidence, and he was involved in a flowing move from Potter's side a few minutes later as a swift counter-attack led to Alexis Mac Allister's drive from the edge of the box being deflected behind.

Everton wrestled control at the midway point of the first half. First, Andros Townsend, cast as the pantomime villain as the returning former Crystal Palace winger, cut inside having received Gray's pass to draw a fine save low down from Robert Sanchez.

The Brighton goalkeeper was guilty of a slack clearance moments later straight to Townsend, who in turn set up Abdoulaye Doucoure in a central position but the midfielder scooped his effort over when well placed.

Further danger was to come as Richarlison slipped in Seamus Coleman as Everton looked to turn the screw but the defender's cut-back was just behind Calvert-Lewin. Yves Bissouma was then uncharacteristically caught in possession as Richarlison's effort from the edge of the box was blazed off target.

Everton's pressure would eventually tell four minutes before the interval, however, and it was another demonstration of how Benitez has quickly built a side devastating on the transition.

Allan found Gray in acres of space down the left and after an explosion of pace took him past Adam Webster, the winger steered his shot across Sanchez for his second goal in as many league games.

Everton might have added a quickfire second with Allan involved once more as after being fed by Townsend down the right, his clever backheel set up the onrushing Calvert-Lewin but the forward's snap-shot was a yard or so off target.

Potter looked to swing the tide at the restart as Joel Veltman was introduced for Mac Allister as Brighton matched up their opponents at the back, and the move almost paid instant dividends.

Everton conceded a cheap free-kick on the edge of their own penalty area and Jordan Pickford did well to readjust his body to keep out Pascal Gross' deflected effort.

Sue Smith on Soccer Saturday said: "There's a huge hole in the Everton wall and Pickford had to react late to a deflection and he does so ever so well."

It proved a turning point as on 56 minutes, the visitors were awarded a penalty. Allan brilliantly slipped through Coleman down the right and it was the retreating Veltman who brought down the Everton captain inside the box.

What ensued will not have pleased Benitez. Richarlison grabbed the ball from Calvert-Lewin in preparation to take the spot-kick as Coleman lay on the ground receiving treatment.

The unsavoury incident drew whistles from the travelling supporters behind Sanchez's goal, but Lucas Digne and Townsend intervened to ensure it was the designated penalty-taker who carried out his duty.

Calvert-Lewin shrugged off the skirmish to plunder in his third goal in as many games this season, arrowing his shot low to Sanchez's right.

Everton weren't finished there as they sought to put the contest beyond doubt. Calvert-Lewin was forced off on 69 minutes to give Gareth Southgate a concern heading into England's World Cup qualifiers next month, but his replacement Alex Iwobi was immediately involved in another blistering counter-attack.

With his supporters still serenading him despite his act of petulance, Richarlison received his pass to slice his right-foot shot wide. Doucoure then drew a save from Sanchez before Pickford had to watch a swerving shot from Trossard, gathered at the second attempt.

Gray was given a standing ovation from the supporters as he was withdrawn inside the final 10 minutes as Everton professionally saw out their win with the points heading back with their jubilant fans to Merseyside. Following Benitez's divisive appointment, it has been a start to the campaign they could have scarcely imagined. 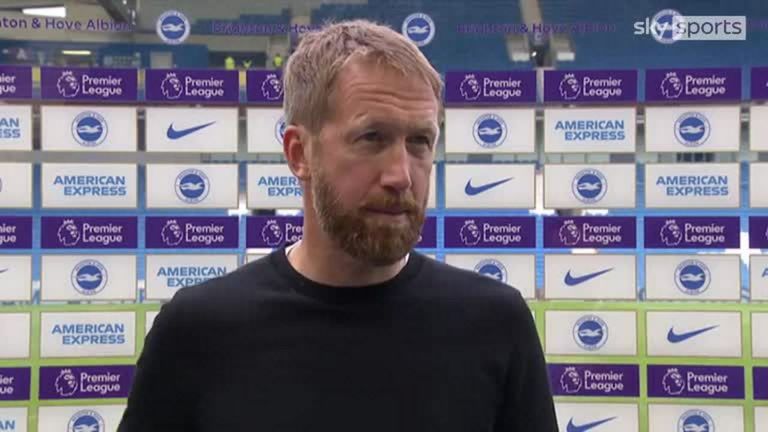 Graham Potter conceded that the better team won as Brighton lost their first game of the season with Everton winning 2-0 at the Amex.

Brighton boss Graham Potter: "We played against a good opponent and have to give them credit. We weren't at our normal level and missed Solly [March]'s balance on the left. We weren't that bad but we weren't that good. When your levels dip it's hard to win points in the Premier League and Everton were too good for us today.

"We've got options coming back but you've always got to look. We'll try to make the best decisions for us moving forward. Hopefully we'll be stronger than when the window opened. Everton were a step-up in quality so it was a culmination of things [why we lost]." 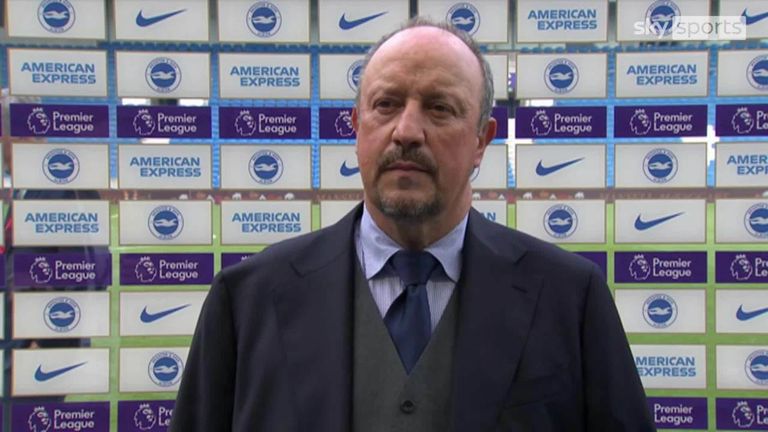 Rafa Benitez was pleased with his players’ team spirit and desire as Everton comfortably beat Brighton 2-0 at the Amex.

Everton boss Rafa Benitez: "I would say the three signings that we did in the summer have been good. We knew what to expect from them. Gray is a young player so it was about getting more consistent. He has the quality and ability to make the difference but he has to continue to train well.

"The reality is that we've had difficult games but you could say so [our best performance]. We had to show character against Southampton and then Leeds was a difficult game. The Carabao Cup with the 10 players, even against a Championship team, the way we reacted in the second half was positive. This is just a little evolution of what the team is trying to do. We are improving."

Man of the match - Seamus Coleman

This was a landmark victory for Everton, coming 38 years after their last at Brighton, and while Gray is quickly resembling the bargain of the summer window, Coleman ensured the hosts were kept at bay.

Fans can expect a busy few days with Ainsley Maitland-Niles the subject of a loan move from Arsenal. The club are seeking cover at right-back, but in much the same way the likes of Alex Iwobi have upped their game since Gray's arrival, such transfer talk seems to have galvanised Coleman.

It was from his sheer willpower to get inside the box that earned Everton their decisive second-half spot-kick. Having made his 350th appearance for the club towards the end of last season, this was a true captain's performance from the Republic of Ireland international.

Following the international break, Brighton travel to face Brentford in the Premier League at 3pm on Saturday, September 11. Everton host Burnley on Monday Night Football on September 13; coverage starts at 7pm with kick-off at 8pm.