Liverpool 1-1 Chelsea: Blues hold out in second half after Reece James' red card

Report and highlights as Kai Havertz's superb opener is cancelled out by Mohamed Salah's penalty kick in first-half stoppage time, following Reece James' red card for handball on the goal-line, and Chelsea go on to hold out against Liverpool for a memorable 1-1 draw at Anfield.

FREE TO WATCH: Highlights from Liverpool's draw with Chelsea in the Premier League

Ten-man Chelsea produced a display of remarkable resistance to hold on for a 1-1 draw with Liverpool, in an epic, enthralling contest between two Premier League title hopefuls at Anfield, following Reece James' hotly-debated sending off in first-half injury time.

The Champions League holders had won at this venue in March and were impressing again on Liverpool's patch, leading through Kai Havertz's brilliant header, as an enthralling contest approached half-time. But drama and controversy moments before the break transformed the match.

Joel Matip hit the bar as Chelsea struggled to clear a corner and when Sadio Mane rifled in a follow-up shot the ball cannoned into James' arm off his knee on the goal-line, before the defender appeared to try to flick the ball away with his hand.

Referee Anthony Taylor consulted the pitchside monitor on VAR's advice and infuriated the Chelsea players by not only awarding a spot-kick - which Mohamed Salah hammered home - but also showing James a red card for denying a clear goalscoring opportunity.

While former Chelsea striker Jimmy Floyd Hasselbaink argued James couldn't go to make the block with his knee without moving his arm in the direction of the ball as well, Sky Sports pundits Jamie Redknapp and Gary Neville agreed the Chelsea man had to go. "I know it hits his leg first but it's just the movement of the arm," said Neville. "If you're denying a goalscoring opportunity a red card has to follow, whether you like it or not," added Redknapp.

The incident left Chelsea level with Liverpool but facing a second-half onslaught in front of the Kop, yet while Salah, Diogo Jota, Virgil van Dijk, Jordan Henderson and Trent Alexander-Arnold were among the players to try to find the winner, the home side struggled to build enough consistent pressure to break through.

Chelsea boss Thomas Tuchel celebrated that resistance - and hard-fought draw against his compatriot Jurgen Klopp - at the final whistle, which brought to the end a brilliant contest which could form an important chapter in a fascinating Premier League title race.

How Chelsea held out in memorable clash with Liverpool...

The first half ended in controversy but it began in frantic fashion, with chances at both ends during an electric opening period between these two championship contenders in the evening sunshine at a packed-out Anfield.

Eighteen-year-old Harvey Elliott, trusted in midfield for the big occasion, almost made it a perfect start for the hosts, shooting just wide from the edge of the box after four minutes, before Chelsea's Mason Mount and Havertz caused problems and Reds' skipper Henderson badly miscued a volley from Alexander-Arnold's excellent pass into the box.

It was a moment of brilliant invention which opened the scoring on 21 minutes, Havertz stooping to meet a near-post corner from James and loop the ball over Alisson. "A sensational header," said Sky Sports pundit Neville.

After riding out the early storm, Tuchel's side were producing the ideal away performance at Anfield and should have extended their lead. They twice counter-attacked, with Mount's lofted pass for Lukaku just overhit and then Havertz missing a chance to play in the Belgian moments later, before the striker's shot was blocked and Mount flashed an effort across the face of goal.

As Elliott wasted a chance on his weaker foot from inside the Chelsea box and Roberto Firmino was forced off with injury, the visitors were on the brink of completing what Neville described as "the perfect half". But that changed dramatically in stoppage time.

Andy Robertson's corner was flicked on by Mane and eventually headed onto the bar by Matip but when Mane's follow-up shot struck James on the thigh and then the arm, VAR advised referee ref Taylor to go to his pitchside monitor where he judged the action to be handball and a denial of a goalscoring opportunity.

The punishment of a penalty - expertly converted by Salah - and red card for James, infuriated the visitors, with Antonio Rudiger booked before the spot-kick and Edouard Mendy shown a yellow card after it, following a scuffle with Henderson.

Tuchel made a double change at the break, with Thiago Silva and Mateo Kovacic coming on for Havertz and N'Golo Kante, but they were inevitably pinned back for long periods of the second half, with Jota heading wide and Van Dijk shooting at Mendy soon after the restart.

Henderson went close with a spectacular long-range effort, while Fabinho and Robertson tried their luck, too, but increasingly Chelsea grew in confidence and were even able to create some attacking moments of their own.

Liverpool struggled to carve out any real chances against the determined visitors, with Alexander-Arnold eventually ending a 14-minute wait for a shot with a dig on 80 minutes, and were fortunate sub Kovacic didn't capitalise when he went through on goal moments later.

The hosts did mount a late charge, with Salah and Alexander-Arnold forcing saves from Mendy, but still they could find no way through their resolute visitors.

In the end, Liverpool were forced to settle for a point, which maintains both sides' unbeaten starts to the season and their positions joint-top of the early Premier League table.

Liverpool boss Jurgen Klopp: "I saw a really exciting game; fast, hard for both teams. We conceded a goal - that's not cool - but the goal we scored, the penalty we got was very deserved. I feel for Reece because it was tricky but it's a clear penalty. Second half, we played good; everyone thinks against 10 men, 'Come on!' - there's an advantage in possession but not in terms of the defensive structure. They were playing slightly deeper but they had eight players [back] with Lukaku up. We couldn't use it - our shots were from distance - but it was a good game, a high-intensity game. Chelsea deserved a draw and we got a point as well.

"I don't know what the result would have been 11 versus 11 but it's really ok; it's early in the season. Seven points from three games - let's go. We are in good shape, we just have to carry on. [Harvey Elliott did] really good. The triangle down the right-hand side has worked pretty well; the understanding between Mo, Trent and Harvey is really good. Harvey just looks completely fine' not exhausted, was always trying to play the ball through."

Is Firmino ok? "Not really. With Bobby I think it's probably a muscle. The problem I hope is not too big." 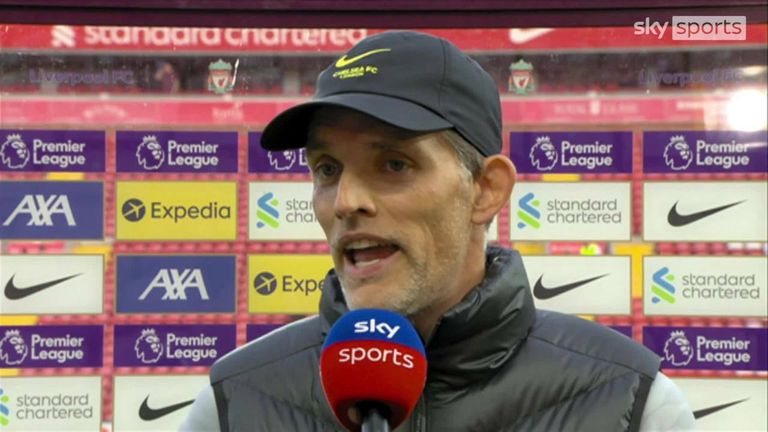 Chelsea boss Thomas Tuchel: "Fantastic [resilience and effort]. I saw a very strong Liverpool side in the first half. We were very good, got the first goal, had a big chance to score the second through Mason Mount, and created a lot of good ball wins. We maybe lacked a bit of precision to have better chances in counter attacks and transitions, but the pressure was high from Liverpool, the energy was high, and at some point we needed to suffer, which we did.

"In the last second, we conceded a penalty and lost N'Golo Kante to injury and suddenly the world was upside down. I cannot praise the team enough for their resilience. I don't know if there are harder stadiums in the world than Anfield to go a man down. The first 10 minutes [of the second half] felt like it would never end, but the next half an hour we could have maybe scored another one and made it harder for them. In the last five I was hoping we would survive and take a well-earned point, and we did, the teamwork was absolutely fantastic."

Was ref Anthony Taylor right to award a penalty and send off Reece James?

"I thought it was handball. It's his knee onto his arm. I think that right arm swings as if it is trying to save it in some way.

"I know it hits his leg first but it's just the movement of the arm."

"James has a bit of motion there with his arm to try to clear the ball. And if you're denying a goal-scoring opportunity a red card has to follow, whether you like it or not."

"I think it's a natural position. He goes first with his knee, with his thigh, that hits the ball first. That's why his arm is moving as well. Yes, the ball hits his arm. The referee has a decision to make. Would I want a penalty there as well? Yes.

"You can't hold your arm behind your back when your knee goes up."