Report and free match highlights as Brighton register 20 shots, but fail to find the net; Neal Maupay, Leandro Trossard, Jakub Moder and Solly March all miss key chances; Leeds below-par again, but come away with a point from the Amex Stadium Brighton were once again left to rue a string of missed chances during a 0-0 draw with Leeds, extending their winless run to eight Premier League games.

Neal Maupay was back in the Brighton starting XI for the first time in three Premier League outings and, despite having a point to prove, spurned an early chance as Tariq Lamptey terrorised Junior Firpo down the right wing in the first half.

Leandro Trossard and Jakub Moder were also guilty of missing gilt-edged chances - both hitting the woodwork - with Solly March also going close after coming on as a second-half substitute. How does Maupay not score?!

Of Brighton's 20 shots, 14 were off target - the joint-highest tally of the season, along with Arsenal in their defeat to Brentford on the opening weekend of the season.

Stuart Dallas registered Leeds' first shot on target in the 55th minute, while Tyler Roberts twice tested Robert Sanchez late on, but he was unable to secure the visitors' third league victory of the season, as they remain 17th, three points ahead of Burnley in the relegation zone.

However, if Sean Dyche's side win against Tottenham on Sunday, Leeds could finish the weekend in the bottom three.

Brighton's winless run is now only beaten by Newcastle's 13-match streak, having drawn six of their last eight games. They move up a place into eighth with 18 points, although it was another frustratingly familiar story for the misfiring Seagulls. 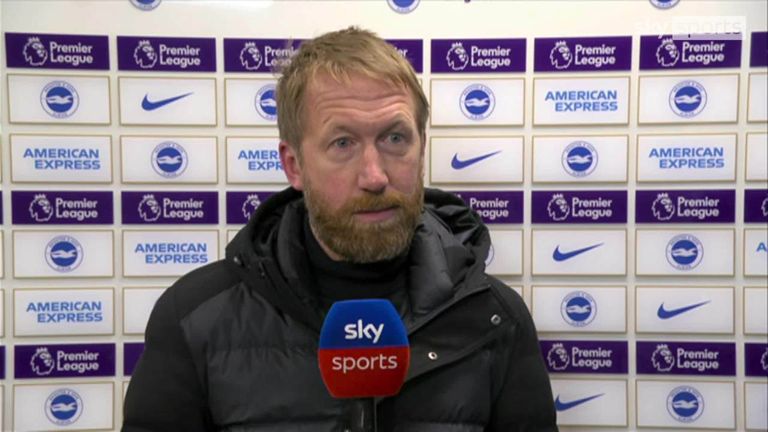 It was a result that drew a smattering of boos from some Brighton fans at full-time and manager Graham Potter told Sky Sports: "They're entitled to their opinion, but I disagree with them completely. You have to understand the game, you have to understand who we're playing against, how we played, what we did.

"I think we're sitting eighth in the Premier League, but maybe I need a bit of a history lesson of this football club."

How Brighton struggled to break down Leeds

Brighton began well at a bitterly cold Amex Stadium, and had two wonderful chances inside ten minutes. The first saw Lamptey's cross sent over the crossbar by Moder. Maupay also fired an effort into the stands after some more sensational play from Lamptey on the right.

The Seagulls then hit the post twice in fairly quick succession. In the 20th minute, Illan Meslier glanced Trossard's shot onto the post with his fingertips. Shortly after, Moder almost punished Leeds for a poor Liam Cooper back pass as he drove down the left of the area, but his attempted shot smacked the side of the woodwork.

Lamptey and Maupay again linked up just before half-time as Brighton continued to see chances pass them by. Lamptey was released down the right with not a Leeds defender in sight, squaring the ball for a waiting Maupay. However, he could not quite get his touch right as the ball flashed wide. Brighton's 12 shots was the most they have had in the first half of any Premier League game this season.

Leeds ended the first half without a shot on target and while Brighton continued to dominate after the break, the visitors had their first shot on target in the 55th minute. Stuart Dallas let fly from outside the area, forcing a high, one-handed save from Robert Sanchez.

But Brighton still saw the better chances fall their way. Trossard flashed wide from range, while Moder could not capitalise on a sloppy pass from half-time substitute Jamie Shackleton. The Poland international then sent another effort over with his first touch as the Seagulls continued to be frustrated.

Leeds almost completed the ultimate smash-and-grab as the game ticked into the final ten minutes. Roberts twice tested Sanchez, his first effort forcing a fine save from the goalkeeper's outstretched leg. The Leeds man then thought he had smuggled the ball home into the bottom corner, but Sanchez was there to claw it off the line.

March had one more roll of the dice for Brighton late in the day, but saw his effort crash off the bottom of the post and avoid rebounding home off the back of Meslier's head.

Bielsa: Phillips not injured at half-time 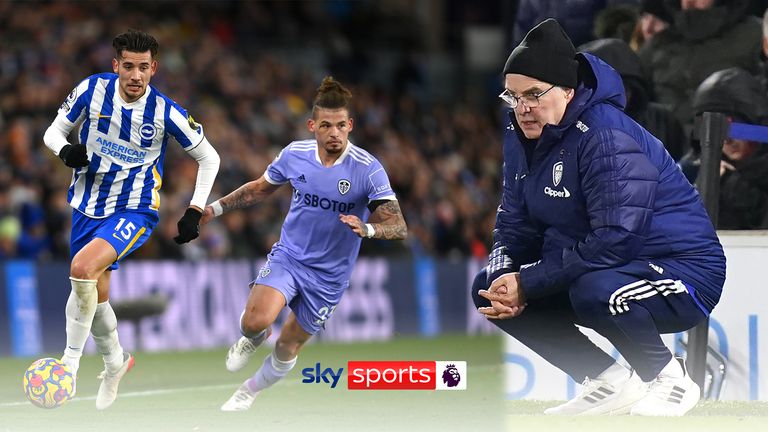 Marcelo Bielsa made two half-time substitutions, taking off England midfield Kalvin Phillips. He had once again begun the game at centre-back - as he did against Tottenham last weekend - before moving further forward into his usual midfield position.

There were some reports that Phillips had been injured, but Bielsa explained his reasoning to Sky Sports, saying: "It was a change because I thought the characteristics of Pascal were better suited to the game.

"The game position he had, had a lot in common with Tottenham and I thought that forming the back four with Llorente, Phillips, Cooper and Firpo would help us to neutralise them.

"We started the game like that, but it wasn't the correct decision. After, Phillips moved into midfield and it's very likely that the adaptation didn't help Kalvin as he was playing well as a centre-back. But I insist it wasn't a question of the names, it was a question of the function collectively."

Sky Sports' Jamie Redknapp added: "I think there's something not quite right. He was definitely detailed to play in defence, but I saw him drift into midfield.

"If I was Bielsa, falling out with players isn't the right thing to do when results are bad. This might be the start of something that isn't quite right at Leeds. I've been a big fan of Bielsa's, but when I see his body language and the way they're playing, they're not playing to the level we expect, and falling out with big players is not the move you should be making right now.

Man of the match - Tariq Lamptey

It was a surprise to some to see Lamptey deployed as a winger rather than wing-back, but Leeds were clearly unprepared as the 21-year-old consistently beat any opposition player that came up again him.

He created five chances for Brighton in the first half - the most he's ever created in a Premier League game - and despite being quieter after the break, did more than enough to warrant the man of the match award.

Potter said of Lamptey after the game: "He's done really well, coming back into fitness, building up slowly but he's getting there. It looks like he's enjoying his football, causing them problems. Lots of positives for us today."

Brighton manager Graham Potter: "Its frustrating, but that can happen sometimes in football. You've got to look at the overall performance from the players, which was fantastic.

"They played really well, created chances, they were brave because the way Leeds defend, you have to use your spare man, which is usually your centre-backs, I thought they did that well. I'm really happy with the way the team played.

"It's a challenge for us, but we created chances today. If we maintain that performance level, we'll be fine, we'll score. Just sometimes it doesn't go, and that's life.

Leeds manager Marcelo Bielsa: "In the first half, the differences were clear and in the second half the game was even with opportunities for both teams. We improved in all our lines.

"It wasn't a question of individualities, some circumstances came to happen. In the first half, there was a lack of co-ordination and there was a lot of things to correct. When there's a lot to change, if the performances change, then you notice it.

"The differences in the first half worries us and the recovery in the second half gives us optimism and hope."

Sky Sports' Jamie Redknapp: "Frustrating is the word. I'm sure Graham Potter will be in that dressing room thinking his team did everything in their power, apart from putting the ball in the net. They had all the quality and showed great technique in wide areas, everything but score.

"There was talk at the start of the season that Brighton needed a striker, a killer in the box. They are crying out for it. That will be their next step - they have got a really successful way of recruiting and they need to get a striker who will convert those chances they created today. If you're a striker and you've got a bit about you, you will score bundles of goals in this Brighton team.

"I didn't mind it when Leeds used to lose 5-3, everyone complained that they were too open, but at least it was exciting. That's how we've always associated Bielsa's teams as playing.

"But right now, that worried me, that performance. We've seen it all too often. There's no real excitement about the way they play… They need to pick it up really quickly. I know they've got lots of players to come back but I'm seeing some bad performances."

Former Leeds striker Jermaine Beckford told Sky Sports: "It was a very uncharacteristic performance from Leeds today… the performances need to be picked up, the energy levels seemed a bit flat. It was a smash and grab, managing to steal a point.

"When the injured players do come back, I would like to say the performances are going to pick up as well."

Brighton go to West Ham on Wednesday at 7.30pm in the Premier League, while Leeds host Crystal Palace on Tuesday at 8.15pm. Free highlights from both games will be available on the Sky Sports website, App and YouTube channel.