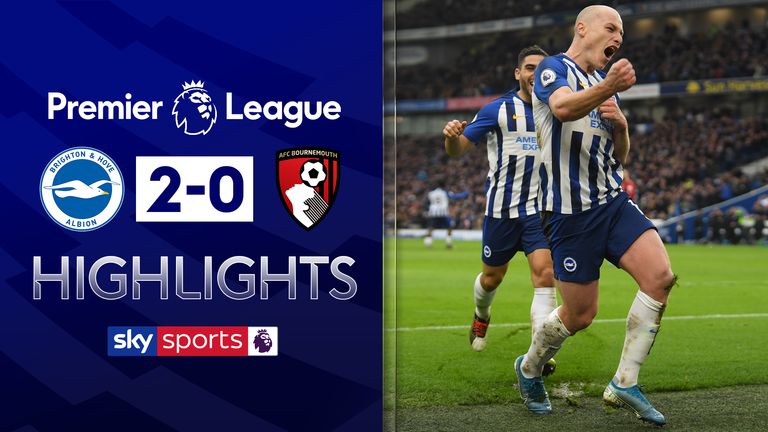 FREE TO WATCH: Highlights from Brighton's win over Bournemouth in the Premier League

Alireza Jahanbakhsh and Aaron Mooy scored their first goals for Brighton to earn an important 2-0 win for Graham Potter's side against south-coast rivals Bournemouth on Saturday.

The Iranian club-record signing finally got off the mark in his 27th appearance by firing home inside three minutes - Brighton's fastest goal in Premier League history.

Brighton thought they'd scored a second when Dan Burn hooked in from close range on 58 minutes but his strike was overturned by VAR for a marginal offside call against the left-back in the build-up.

However, Mooy eventually doubled the advantage (79) when he showed some fine control in the box before bending home from 15 yards.

The result moves Brighton five points clear of the relegation zone, while Bournemouth have now lost seven of their last nine and have just a two-point gap on third-bottom Aston Villa.

Man of the Match: Aaron Mooy

Brighton had won just one of their last eight themselves, but started quickly, forcing a corner inside a minute and they made the breakthrough moments later.

The impressive Mooy fed Neal Maupay in the box who teed up Jahanbakhsh to blast in a low shot. There were emotional celebrations for Jahanbakhsh, who joined the Seagulls for £17m in July 2018 but had failed to reproduce the scoring form he'd previously shown in Holland.

Brighton 'keeper Mat Ryan then saved well from Josh King before the hosts almost made it two on 10 minutes when Mooy and Maupay combined again and the latter fired over the bar.

Brighton made four changes with Lewis Dunk, Davy Propper, Leandro Trossard and Neal Maupay coming in. Bournemouth made five changes, with Diego Rico returning to the visitors' defence having served a one-game ban.

Brighton continued to threaten on the break as Bournemouth began to get a foothold in the game but the home side's Burn did well to block a Harry Wilson shot on the edge of the box just after the half-hour mark before a Junior Stanislas effort deflected kindly into Ryan's hands.

VAR Graham Scott was busy after the break. First, Burn escaped punishment for a clash with Wilson, who got an accidental kick to the head, and then both on-field ref Paul Tierney and the VAR rejected Dominic Solanke's penalty appeals when he went down under a challenge from Lewis Dunk in the Brighton box.

Most decisively, though, VAR denied Burn what would have been his first-ever Brighton goal when replays showed the left-back had narrowly advanced offside from Mooy's free-kick. 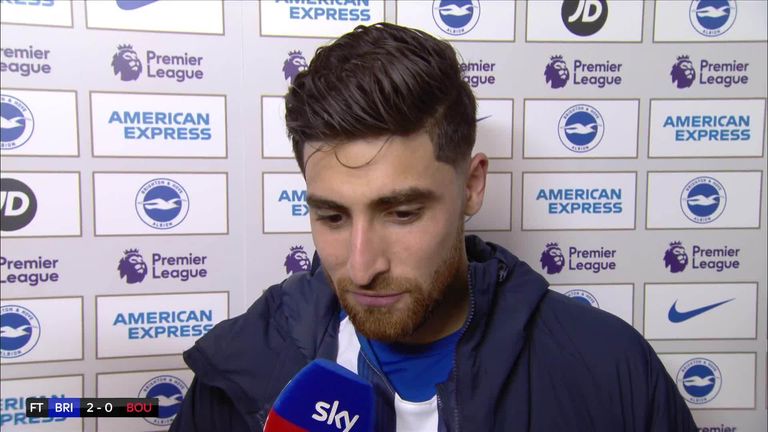 Brighton's Dan Burn and Alireza Jahanbakhsh felt they deserved their victory over Bournemouth, in which Jahanbakhsh scored his first Premier League goal

VAR then took centre stage again on 75 minutes, when Jack Stacey was adjudged not to have handled in the Bournemouth box.

But happily Mooy returned the focus to the players with a fine finish on 79 minutes, chesting down a cross, stepping inside his man and bending the ball past Bournemouth 'keeper Aaron Ramsdale to secure the victory and notch his first for the club.

Brighton were then able to see out the final stages comfortably, with Bournemouth reduced to 10 men when Stacey limped off on 81 minutes after Eddie Howe had used all of his subs. 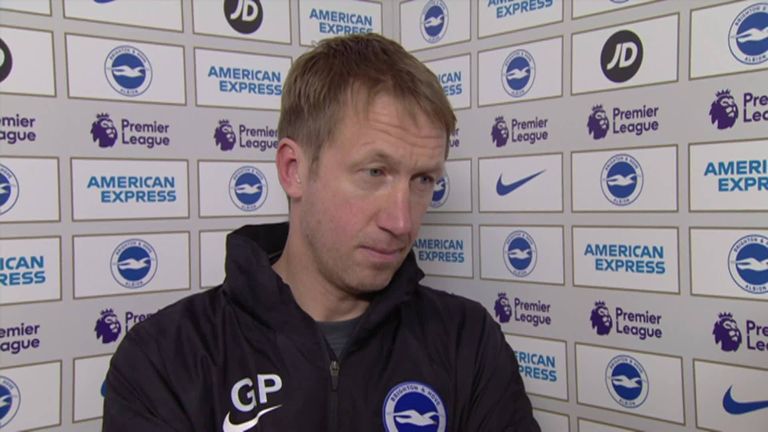 Graham Potter, Brighton: "I thought we deserved the three points. It was a really good performance, great understanding. We've had a frustrating period so it was important to get the three points. You can talk about performances all you want but it's about points as well and it's nice to get them. Alireza has been frustrated because he wants to play football but his approach has been perfect and I'm really pleased for him."

Eddie Howe, Bournemouth: "No complaints. I thought we took time to settle into the game. In the first 10 minutes I thought we weren't at our best and we conceded the goal. I thought for the rest of the first half we were pretty good, had some good chances, some good moments. The second half was tough for us. I thought Brighton played very well but we kept giving them possession and then it became a difficult half, especially when we went to 10 men." 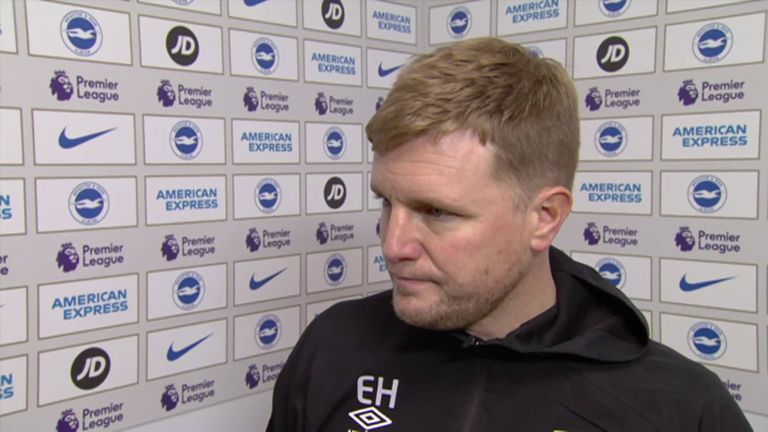