Daniel Amartey's late header from a Robert Sanchez error gave Leicester a vital comeback victory as they beat Brighton 2-1 at the Amex.

Leicester struggled for rhythm in the first half, going behind through Adam Lallana's first goal for Brighton (10), composing himself to tuck past Kasper Schmeichel from Neal Maupay's slipped pass.

But Leicester improved in the second half as Kelechi Iheanacho's cool finish from a brilliant Youri Tielemans through ball levelled things up (62), before Amartey capitalised on Sanchez's error, reacting to convert from a corner after the goalkeeper had missed his punch (87).

It was a much-needed win for Leicester in their quest for the top four, giving them a seven-point cushion ahead of Everton in fifth, though the Toffees do have two games in hand. Brighton stay 16th, three points above the drop zone.

Man of the match: Kelechi Iheanacho

Both sides have been struggling with injuries of late, but Leicester, who went with a back three again after the 1-1 draw with Burnley, struggled to get going for the first 45 minutes.

Brighton, whose 66 attempts in the previous three games had yielded just one goal, took the lead after 10 minutes as Maupay shrugged off the challenge of Tielemans and slipped in Lallana, who calmly slotted into the bottom left corner past Schmeichel.

Leicester's only chance in the first half came from range as full debutant Sidnei Tavares, a cousin of former Manchester United winger Nani, saw his superb half volley from 25 yards tipped wide brilliantly by Brighton goalkeeper Sanchez.

But top-four chasing Foxes, hoping to avoid a repeat of last term's late-season collapse which saw them drop out of the Champions League places, looked uncomfortable in defence as the three-man backline were stretched by a positive and organised Brighton.

Lallana then nearly grabbed his second, glancing a header from Pascal Gross' corner against the post, while Maupay thought he had doubled Brighton's lead from Lallana's clever flick, finishing almost identically to Lallana's goal, but the assistant rightly flagged for a close offside.

Leicester began to find rhythm after the break - Timothy Castagne's through ball was slammed into the side-netting by Iheanacho - but Brendan Rodgers' side got their equaliser thanks to a world-class piece of creativity from Tielemans. 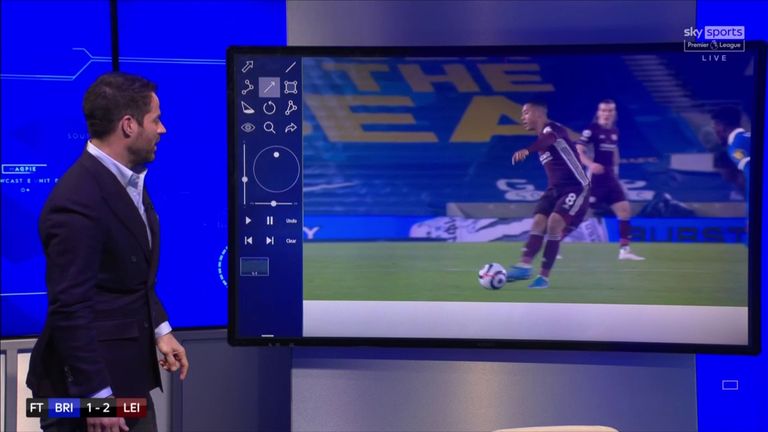 Spotting the run of Iheanacho in behind Lewis Dunk, the Belgian gave Brighton defenders the eyes, threading a no-look, inch-perfect pass from deep into his path in the box, and the Nigerian duly finished off with poise for his second goal in two games.

Leicester looked to have their tails up, but Brighton settled again and took the sting out of their attacking play, and had a chance of their own as Leandro Trossard and Steven Alzate combined to present Lallana with an opening, but he failed to properly test Schmeichel unmarked from just inside the box.

Leicester felt they should have had a penalty after Dunk slid in on Jamie Vardy in the box, and though Michael Oliver and the VAR saw a touch from Dunk on the tackle, Brighton shot themselves in the foot from a corner moments later.

Sanchez came to punch sub Marc Albrighton's cross, but got caught under the ball, prompting Amartey to react quickly behind him, stooping low to head into the empty net for only his second Premier League goal - the last coming 1,540 days ago.

An injury-hit Leicester made two changes from the 1-1 draw at Burnley as Mendy and Choudhury dropped to the bench, replaced by the returning Fofana and 19-year-old Sidnei Tavares, the Portuguese midfielder making his first Leicester start.

It was just one change for Brighton from the 1-0 defeat at West Brom, as Lallana came in for Connolly.

Leicester won having been nowhere near their best, a good sign ahead of a crucial final 10 games of the season without several of their key men, but for Brighton it was late heartache again, having now lost 17 points from winning positions this season, the second-highest in the Premier League.

Brighton boss Graham Potter: "It's a bit harsh at the moment, we're suffering. I thought the performance deserved something from the game.

"First half we did well, second half not so well. Over the course of the game I just think we missed too many passes.

"It feels like we could have got something from the game. At half-time, they're 1-0 down and going for the Champions League, so you'd expect them to respond and push for an equaliser, but we gave away the ball a little too cheaply. I thought we responded quite well, but disappointed to concede in the manner we have.

"We know we're in a fight, we know we have to perform and be at our best. You have to be at your best, fight for everything have a bit of luck."

Most @premierleague points won away from home this season:

"We had to ask the question at half-time and in the second half we were brilliant. We stopped them playing, and then we showed our quality. By the end we deserved to win. 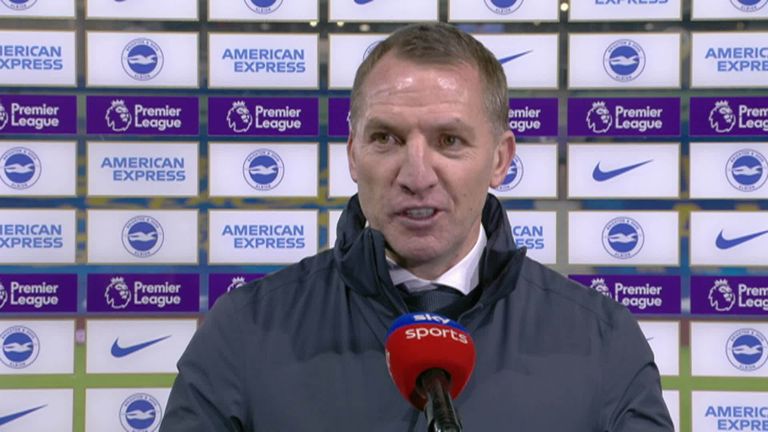 After a poor start in the first half Brendan Rodgers felt that Leicester showed their true quality in the second and deserved to come from behind to beat Brighton at the Amex stadium.

"We have to deal with it [the injuries], you only need to look at the bench, we've got some young players. Which is OK because we love young players, but some aren't playing regularly in the under-18s!

"Second half the tempo was better, speed of the game, movement was better. We're now into the final 10 games. We hope over this period we can get some of our players back When they're not all ready you have to be ready to dig in, and the way we did in the second half was outstanding."

Man of the match - Kelechi Iheanacho

Iheanacho has scored in each of his last two Premier League appearances, having netted in just one of his previous 17 in the competition.

"He got a really good goal, his link-up play with Jamie Vardy was excellent, and some of his passing has been superb. The more games he gets, he seems to be improving."