Brighton moved up to fourth in the fledgling Premier League table after Neal Maupay's disputed penalty and Danny Welbeck's header sealed a 2-1 win over Leicester in an incident-packed encounter.

Maupay's 35th-minute spot-kick was controversially awarded with Jannik Vestergaard punished for handball yet seemingly held back by the Seagulls striker, but Welbeck's second-half header (50) was legitimate reward for their dominance.

Jamie Vardy finished a slick move on his 250th Premier League appearance to give the visitors a lifeline (61) but, having surrendered a two-goal lead in the Europa League in midweek, the Foxes were left to rue further decisions as a comeback of their own was scuppered at a sodden Amex Stadium.

Ademola Lookman was denied after a VAR check in the 67th minute, with Harvey Barnes ruled offside, and Barnes was dubiously deemed culpable of another infringement when Wilfred Ndidi nodded past Robert Sanchez with just five minutes remaining.

Brendan Rodgers declared Brighton's opener "never a penalty" and felt Ndidi's header should have stood, while his counterpart Graham Potter admitted his team had enjoyed "a little bit of luck".

Potter's side sit just a point off the summit and extend their best start to a top-flight season with four wins from five, while Leicester, who toiled until Lookman's second-half introduction, are 12th with just two wins from their opening fixtures.

Man of the Match: Marc Cucurella

How Brighton dug in and VAR denied Leicester

After generous applause in tribute to the late Jimmy Greaves, the teams set a brisk tempo on a slick surface, Youri Tielemans shooting just wide after a neat one-touch move involving Barnes and Vardy.

Brighton had not beaten Leicester in eight Premier League attempts but the Foxes, frustrated by Napoli on Thursday, would not muster a first-half shot on target and Graham Potter's side grew in confidence.

The impressive Marc Cucurella teed up Maupay after a nutmeg and slide-rule pass, before a scooped cross found its way to Adam Lallana, who crafted a yard with a dummy but shot well over the bar.

Leandro Trossard tested Kasper Schmeichel from an angle but the breakthrough Brighton had threatened came in controversial circumstances, Shane Duffy heading onto Vestergaard's outstretched arm, though the defender appeared to have been held and hindered by Maupay himself.

Referee Stuart Attwell consulted only his assistant rather than the touchline monitor but the VAR upheld his decision and Maupay sent Schmeichel the wrong way for his third goal of the season.

Rodgers swapped the ineffective James Maddison for Lookman at half-time but Brighton doubled their lead shortly after the restart. Welbeck beat Vardy at the near post with a glancing header from Trossard's free-kick, but the evergreen striker was not ready to let the game go.

Lookman was involved in the build-up with a smart back-flick as Leicester hit back stylishly, Vardy meeting Tielemans' fine clipped cross from close range for his 150th Foxes goal.

Law 11 from the IFAB Laws of the Game 2021/22 says that a player in an offside position at the moment the ball is played or touched by a team-mate is penalised on becoming involved in active play by - among other things - "preventing an opponent from playing or being able to play the ball by clearly obstructing the opponent’s line of vision".

Momentum looked firmly with Leicester but though the visitors appeared to have secured an equaliser when Lookman scuffed into the back of the net, it was ruled out after the VAR again upheld the onfield decision of an offside flag, with Barnes judged to be in Sanchez's line of sight.

Caglar Soyuncu headed wide inside the box with just over 10 minutes remaining as Leicester kept the pressure on in search of a leveller, while Barnes saw his shot deflected onto the bar.

Leicester finally looked to have equalised through Ndidi's header but Barnes was ruled to have obstructed Sanchez for a second time and Brighton held on, Duffy and Lewis Dunk typically dogged as the Foxes' late charge proved in vain.

The three flashpoints - how the managers reacted 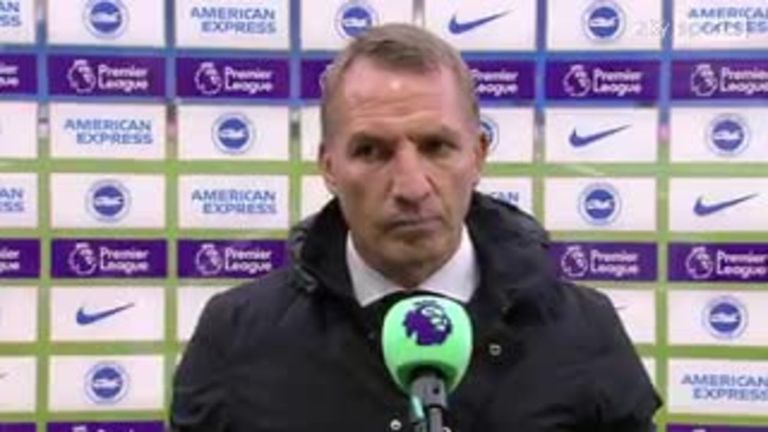 Leicester boss Brendan Rodgers: "It's not a penalty but even more disappointing is the collaboration between the officials; all four of them. [Vestergaard] is being pulled down. One arm is pulled down and the other goes up; he's not seeing [the ball], the header goes straight onto his arm and they've given that as a penalty? It's incredible.

"And it's the process too. The fourth official didn't see it, the referee had given a corner. The linesman who was a way away gave it and for it not to be looked at [by the referee at the monitor] was disappointing."

Brighton boss Graham Potter: "Instinctively, when I watched it live, I thought the hand was up and I thought it was a penalty instinctively." 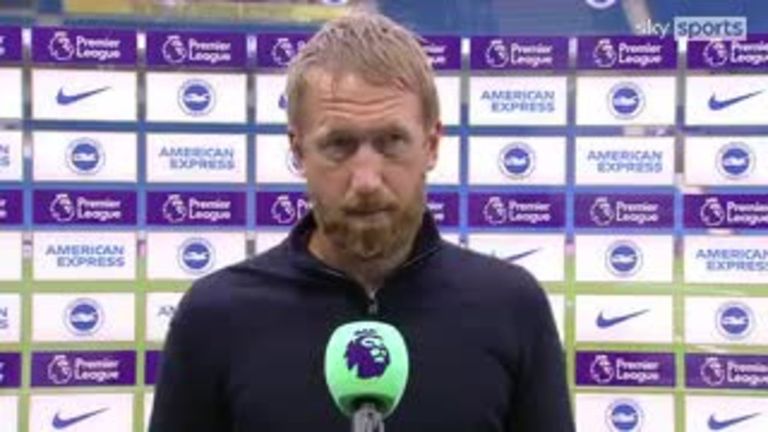 Graham Potter says it was a great win for his Brighton side against Leicester this afternoon, making it four wins in five

On Lookman and Ndidi's disallowed goals:

Rodgers: "I can see a little bit on Ade's [Lookman] one where Barnes' run is maybe blocking him a bit - the 'keeper is maybe thinking Jannik is going to head it so it catches him by surprise. I think he can still see the ball but I can understand that one, that Barnes is maybe half-blocking him.

"But for Wilf's goal, 'Barnsey' is moving out; everything's in front of the goalkeeper - he can see it. It's a great leap, a great header and at no time was the 'keeper ever blocked from viewing it. We didn't have the luck on our side and that's ultimately cost us. I don't think there's any doubt that we should have had at least one of those as a goal."

Potter: "I haven't watched them back but the offside ones felt tight to me. That's life sometimes. There were times when margins didn't go our way last season. It's part of football unfortunately but we know we've had a bit of luck to get the three points."

Brighton host Swansea in the third round of the Carabao Cup on Wednesday, before travelling to Crystal Palace for Monday Night Football on September 27.

Leicester face a trip to Millwall in the Carabao Cup on Wednesday and are back in Premier League action at home to Burnley on Saturday September 25.