Zaha will make Palace history if he can find the back of the net in the Sky Live clash at Selhurst Park, less than a week after he signed a new five-year contract with the Eagles.

The news came as a relief to Roy Hodgson, who admitted he had been concerned the club's top scorer from last season could have left during the summer.

"He's very, very good; all players have got qualities of course, and there aren't many players who can literally do every single thing," he said.

"But he scores top marks in so many aspects of the game, and when it comes to dribbling and manipulating the ball and going past opponents, I put him up there with the very best.

"I think it's been obvious to Wilf all the way through that as far as I and my coaching staff were concerned, we were very anxious for him to sign a new contract and to be happy going into the new season with his new contract.

For their opponents Liverpool, Sadio Mane scored twice as Liverpool thrashed West Ham 4-0 at Anfield last weekend, taking an early lead ahead of Mohamed Salah and Roberto Firmino in the goalscoring stakes early on - even if the Egyptian will be favourite to overturn that soon enough.

Manager Jurgen Klopp said the trio operate more in a spirit of co-operation than competition, however, with each bagging at least 20 goals in all competition last season. 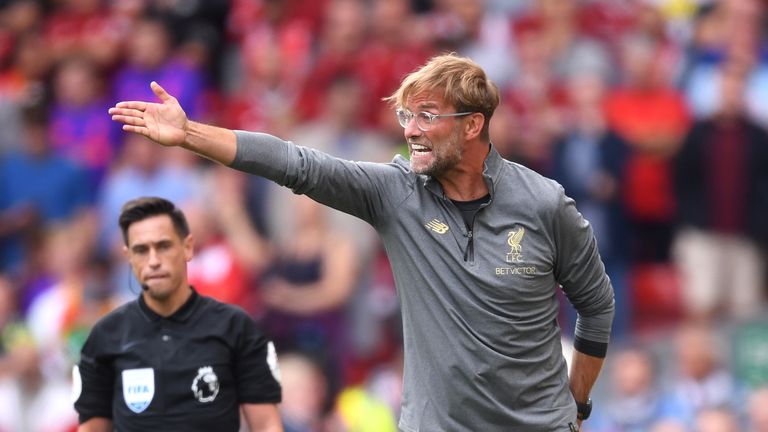 Jurgen Klopp speaks ahead of Liverpool's trip to Crystal Palace

He said: "They don't have a real competition, they don't count the other guys or whatever. They enjoy playing together and that's very good. I really love the fact we have the possibility to bring other players in with similar qualities. It is really nice.

"It is not about having a competition between strikers, it's about them really loving working together. That is what is obvious I would say. I don't think they are bothering at the moment about specific numbers of goals, they only want to win football games."

Max Meyer could make his Crystal Palace debut against Klopp's side.

The summer signing from Schalke missed last weekend's 2-0 win at Fulham as he fought for full match fitness.

But Hodgson has no fresh injury concerns so can pick from a full-strength squad.

Liverpool could bring Joel Matip and Fabinho into their squad for the trip to south London.

Defender Matip has not played for the club since March but is back in training after hip trouble and may feature on the bench, with Virgil van Dijk and Joe Gomez in place.

Fabinho is also pressing for his debut after failing to make the season-opener against West Ham but Dejan Lovren is out.

Crystal Palace have lost each of their last three home league games against Liverpool - it's their longest losing home run against the Reds in league competition.

After a run of three defeats in a row against the Eagles, Liverpool have won four of their last five Premier League meetings with Crystal Palace.

The last Premier League meeting on a Monday between these sides was back in May 2014 - Liverpool were leading 3-0 after 78 minutes before Crystal Palace came back to draw 3-3.

Crystal Palace, who have won their last three Premier League games at Selhurst Park, are looking to secure four home top-flight wins in a row for the first time since December 1990 - the fourth game in this run also came against Liverpool.

Crystal Palace striker Christian Benteke has scored six goals in nine top-flight games against former club Liverpool, more than he has against any other current Premier League team.

What a game! This is a good game, Selhurst Park is a hard place to go, Palace won at Fulham but Liverpool were irresistible against West Ham.

This is a big game for Liverpool, Man City will have already won and you've got to win these games if you're going to win the Premier League. I think this is a difficult game for them but I'll just go with Liverpool.