Match report and highlights to follow as David Turnbull strike fires Celtic to fifth consecutive Scottish Premiership victory; champions now 15 points behind leaders Rangers; Aberdeen have won one of their last 10 and failed to score in their last six 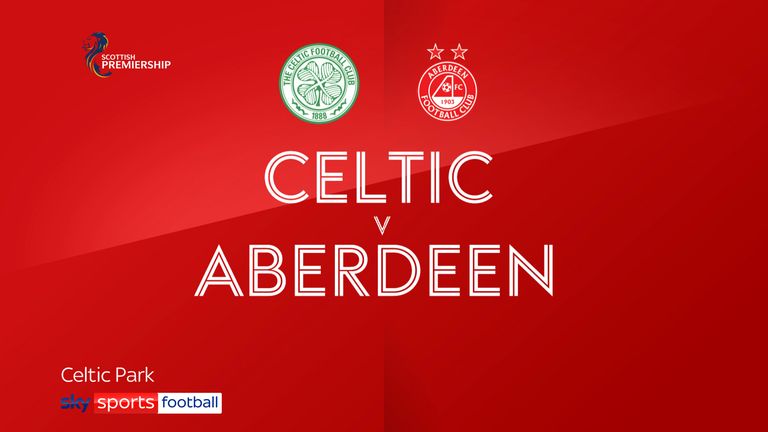 Highlights of the Scottish Premier League game between Celtic and Aberdeen

David Turnbull's long-range strike proved enough for Celtic to claim their fifth victory in a row as Aberdeen went a sixth match without scoring.

The midfielder struck from nearly 30 yards in the 14th minute to earn the Hoops a 1-0 victory in their final game in hand on Scottish Premiership leaders Rangers, who are now 15 points clear with nine games remaining.

The Dons had a penalty claim rejected and hit the post through Florian Kamberi in the first half, before enjoying their share of the few chances on offer in the second period.

Derek McInnes' side have now won just once in 10 matches and remain four points behind Hibernian in the race for third, having played a game more.

Celtic boss Neil Lennon made three changes with the fit-again Stephen Welsh replacing Shane Duffy in the middle of the back four and producing a solid display. Ismaila Soro came in for Scott Brown and Albian Ajeti was up front alongside Odsonne Edouard after taking Tom Rogic's place, although the Switzerland international made little impact.

Ash Taylor was back in the Aberdeen defence with Niall McGinn making way and Ross McCrorie moving into a midfield trio.

Celtic had the bulk of the early possession and Greg Taylor and Turnbull were close to setting up team-mates before Aberdeen threatened on the break. Kamberi shot weakly at Scott Bain after running from his own half with men in support.

The breakthrough came after Callum McGregor was allowed to drive forward unchallenged and pass to Turnbull in space 30 yards out. There were several red shirts ahead of him but the former Motherwell midfielder picked his spot in the bottom corner and drove home for his seventh goal in 16 matches.

Aberdeen enjoyed a good spell after the half-hour mark. The Dons had a handball appeal dismissed by referee Alan Muir after Kamberi drove the ball against Welsh, whose arm was by his side, inside the box.

Fraser Hornby could not connect with Dean Campbell's cutback in the six-yard box before Kamberi hit a snap-shot off the post from 25 yards.

Celtic rediscovered their threat just before the break as Turnbull and Edouard linked up twice. The latter had a decent effort pushed away by Joe Lewis before Turnbull's shot was deflected wide following a one-two.

The second half was finely balanced with the Dons going in search of an equaliser when they had possession. Kamberi sent a free header wide from 16 yards early on and Hornby hit a strike straight at Bain as he ran along the edge of the box.

Turnbull had a good chance in between when McGregor set him up, but the Scotland Under-21 international did not get hold of his shot and it was blocked.

Ryan Christie came close with a deft lob before setting up substitute Patryk Klimala in the 89th minute but Lewis came off his line to block.

Aberdeen exerted some last-ditch pressure and McCrorie saw a shot blocked in the goalmouth.

Aberdeen manager Derek McInnes: "Of course it [the run without a goal] hurt, but we need to take responsibility. [Sam] Cosgrove probably knew he was leaving at the start of the window and we were scrambling about to get players in.

"I thought [Fraser] Hornby second half showed signs of what he is capable of and Kamberi was good throughout, he hit the post, worked the keeper and looked a threat.

"I am encouraged but disappointed we now hold that record and of course it's not something we want to have aimed at us. But it's there and only we can do something about it now.

"Alan apologised to me before the game for the penalty he didn't give us when Lawrence Shankland saved it on the line earlier in the season. And he was unsighted then and having watched it back, I could see why he was unsighted.

Celtic assistant manager John Kennedy: "Really good control first half but we got a bit ragged second half which meant we lost the ball in some silly situations which put us under a wee bit of pressure with Aberdeen breaking on us.

"Towards the end when it's 1-0, they are always going to have a go so we had to defend strongly both from set-plays and open play, and we did that. It's pleasing we have seen the game out the way we did."

Turnbull netted his seventh goal in 16 matches since forcing his way into the team.

"He's been great," Kennedy said. "You see his quality. We have seen it a lot in recent games but it was good to see him get the goal in terms of finding space in behind the midfield and driving into a position where he can get his shot off.

"He's a terrific guy who works really hard on his game, assesses everything, reviews everything and tries to implement things on the pitch, and you can see that in his performances."

Celtic travel to Ross County in the Scottish Premiership on Sunday at 7.30pm - live on Sky Sports Football - while Aberdeen host Kilmarnock on Saturday at 3pm.