Match report as Liel Abada's debut strike is cancelled out by Evander free-kick in Ange Postecoglou's first competitive game in charge; Nir Bitton and Anders Dreyer dismissed as both sides end game with 10 men; Celtic head to Denmark next week with Champions League qualifier in balance

Ange Postecoglou's tenure as Celtic boss began with an incident-packed 1-1 draw with Midtjylland as both sides ended the Champions League qualifier with 10 men.

New Hoops signing Liel Abada, the 19-year-old Israeli winger, marked his competitive debut by scoring in the 37th minute of the first leg at Parkhead.

However, Celtic defender Nir Bitton dampened the enthusiasm among the 9,000 home fans when he was sent off late in the first half for needlessly picking up the second of two yellow cards for remonstrating with Anders Dreyer after he had
dived in the box.

The Danish wideman was sent off 10 minutes into the second half for another dive and as the game swung from end to end Evander levelled for the visitors in the 66th minute with a whipped-in free-kick to set up nicely next week's second
leg in Denmark, with the away goals rule not applying this season.

Celtic's biggest home crowd since coronavirus restrictions came into place in March 2020 lent a raucous atmosphere to their side's first meaningful game of the campaign.

Postecoglou had voiced concerns over his squad's fitness and over how long it was taking to get new faces into his under-strength squad but he fielded almost his most experienced team.

There was a familiar face in the opposition, former Hoops defender Erik Sviatchenko, who captained the Danish side.

There was some concern for Postecoglou in the 10th minute when Bitton, after some treatment to a face injury following a challenge by striker Junior Brumado, went up the tunnel leaving the Hoops with 10 men.

Moments later, Raphael Nwadike also went off with a head injury after a challenge by Anthony Ralston and both sides were a man down before both casualties returned to the fray.

In the 24th minute striker Odsonne Edouard fired a shot on the turn over the bar from the edge of the box.

The match burst into life in the 36th minute, however, when Hoops attacker Ryan Christie struck the post from close range from Abada's cross and then headed over from the same player's delivery.

A minute later, Abada showed how it should be done when he swiftly flashed a rebound into the net after Midtjylland keeper Jonas Lossl parried a powerful drive from Christie. More drama soon followed.

Bitton, booked earlier for a foul on Brumado, was sent off by referee Sandro Scharer for lifting his hand to Dreyer after the Midtjylland player appeared to go down too easily in the box.

The Celtic fans cheered when the Danish winger received another yellow when he went down at the edge of the box under the close attention of new Hoops captain Callum McGregor.

Then, as the belief returned to Parkhead, the Scotland midfielder skimmed the bar from the edge of the box with a terrific drive before Edouard was put through only to hit Lossl with an unconvincing strike - and Celtic soon paid for
that miss.

After being brought down by Celtic defender Stephen Welsh 10 yards in from the byline on the left, Brazilian midfielder Evander, who had come close minutes earlier with a drive, hammered his free-kick in off the far post with questions around Parkhead 'keeper Vasilis Barkas. More huffing and puffing ensued but the tie remains up for grabs. 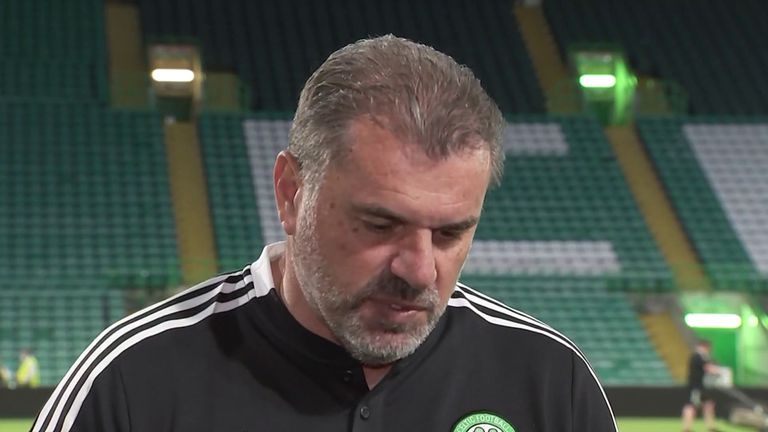 Celtic manager Ange Postecoglou said: "I can't ask any more of the players. We will be better prepared, no doubt, in eight days' time.

"In fact, I don't think we will ever be as badly prepared as we were tonight going into such an important game and that's on me.

"It is, I'm the manager of the football club. I'm the one that takes that responsibility of providing support for the players and staff.

"If things aren't happening it's on me to make them happen. I haven't done a great job so far to be honest because with the disruptions we've had, we haven't been able to bring the players in.

"My role is to try and reinforce this squad and to try to prepare this squad for what is ahead, and to their credit, the players didn't look for excuses tonight.

"They put in a solid shift and I'm just disappointed they didn't get the rewards for what I thought was an outstanding performance."

Celtic host West Ham in a pre-season friendly on Saturday at 3pm before travelling to FC Midtjylland for the second leg of their Champions League second qualifying round tie on Wednesday at 6.45pm.